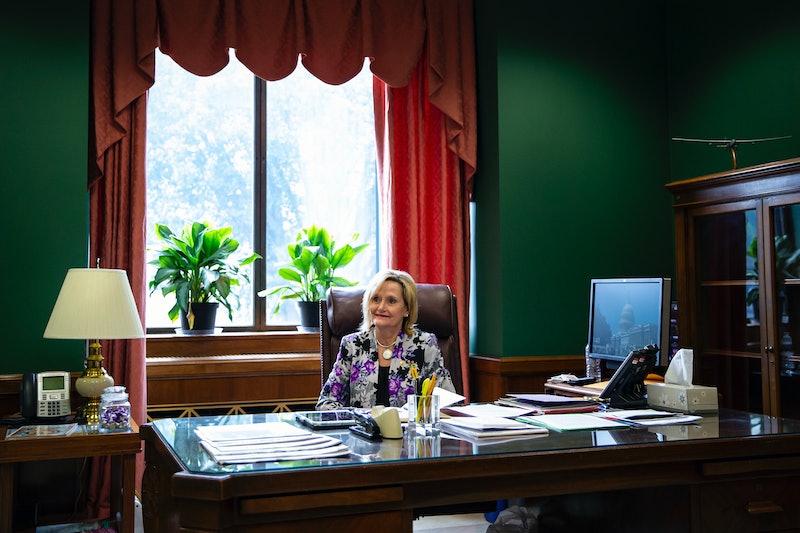 Millions of Americans went to the polls on Tuesday, and most of the races that they were voting on have long since been decided. There are a few that are very much still up in the air, though, and one of them is in the great state of Mississippi. Updates on the Mississippi Senate race show that the country will have to keep following it for another couple of weeks.

On Nov. 6, Mississippians went to select a senator to finish out the last two years of Sen. Thad Cochran's term, as Cochran retired at the beginning of April for health reasons, according to The Washington Post. This meant that Mississippi was actually electing two senators in the 2018 midterms. Republican Sen. Roger Wicker was running for re-election, which he won handily, according to CNN. The special election was a closer one, even though one of the Republican candidates was Sen. Cindy Hyde-Smith, Cochran's temporary, appointed replacement, as CNN wrote.

The special election was a so-called "jungle election," meaning that there were several candidates all vying for the 50 percent of the vote that they would need to take the seat, according to CNBC. None of the candidates reached that point, though, so the two highest vote-getters will now compete in a run-off election scheduled for Nov. 27.

While the first round of the special election was quite close, the vote spread suggests the run-off might be a different story unless a different group of voters turns up to cast their votes. According to The New York Times, Hyde-Smith garnered 48.5 percent of the vote, with her Democratic opponent Mike Espy close behind her at 40.6 percent. The two of them are separated by just over 8,000 votes.

However, you also have to pay attention to the fact that there were another two candidates in the race: Republican Chris McDaniel, and Democrat Tobee Bartee. While Bartee got only 12,707 votes and 1.4 percent of the overall total, McDaniel got over 146,000 votes and 16.5 percent, according to the Times. In an interview with the Clarion Ledger, McDaniel wholeheartedly threw his support behind his Republican former competitor, endorsing Hyde-Smith and talking about "the danger that Mike Espy would present as a U.S. senator."

If the votes split by party similarly to the way they did in the first round, then, Hyde-Smith will have no trouble holding off Espy. There is a new twist in the race, though. On Sunday morning, journalist Lamar White Jr. posted a video to Twitter showing Hyde-Smith making a joke that many have viewed as highly offensive, given the historical context in Mississippi — and that Espy is black.

"If he invited me to a public hanging, I'd be on the front row," Hyde-Smith said in the video, which was filmed at a campaign event. White wrote that Hyde-Smith was referring to the cattle rancher in Tupelo, Mississippi who was holding the event.

The video went viral, with many people on Twitter and elsewhere condemning Hyde-Smith for it, according to The Washington Post.

"Her words show that she lacks the understanding and judgment to represent the people of our state," Espy said of his opponent, calling the joke "reprehensible," according to the Post.

"In a comment on Nov. 2, I referred to accepting an invitation to a speaking engagement," Hyde-Smith said in a statement defending herself. "In referencing the one who invited me, I used an exaggerated expression of regard, and any attempt to turn this into a negative connotation is ridiculous.”

In other words, that Mississippi Senate seat is still very much open.