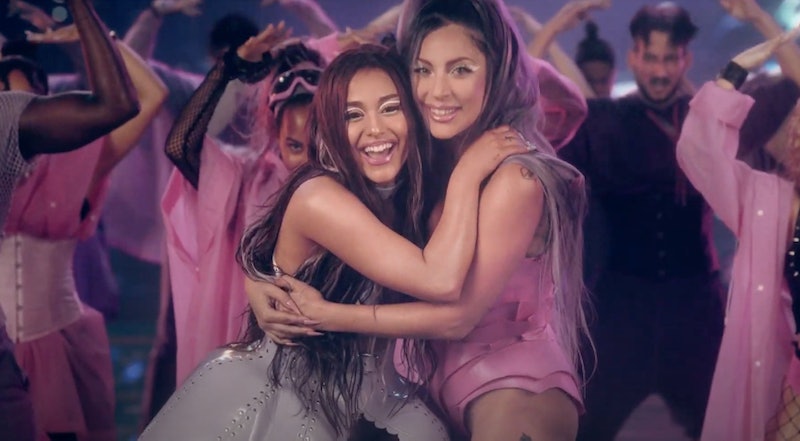 Like knives falling from the night sky, Lady Gaga and Ariana Grande’s “Rain on Me” video dropped on May 22 — fresh after the song’s midnight premiere. The second single off of Gaga’s upcoming sixth studio album Chromatica, “Rain on Me” is an upbeat pop ballad that is all about, both literally and metaphorically, weathering the storm after much hardship and pain. Taking a cue from Gaga’s “Stupid Love” video, “Rain on Me” features synchronized dance moves and futuristic outfits that will wash away all of life’s troubles, while also making you really, really, really miss your friends. (Who doesn't want to grab their BFF and dance in the rain right now?)

The video alternates between Gaga and Grande’s group of futuristic dancers (Gaga is in pink, Grande in a grayish purple) as they become soaked from the rain water and knives — perhaps emblematic of the trauma and hardships they've had to endure. The two croon in the chorus, “I’d rather by dry, but at least I’m alive / Rain on me, rain, rain, rain on me, rain, rain.” In an interview with Zane Lowe on May 21, Gaga explained that the single is “about an analogy of tears being the rain” — and a metaphor of “the amount of drinking that I was doing to numb myself.”

She continued, “I’d rather be dry. I’d rather not be drinking, but I haven’t died yet. I’m still alive. Rain on me. OK, I’m going to keep on drinking. This song has many layers.”

The video comes a day after both Gaga and Grande sat down for separate interviews with Lowe on his Apple series Beats 1 to discuss the collaboration. Gaga gushed about the “very healing process” of working with the “Thank U, Next” singer. "She was so open to trying things that she hasn't done before,” Gaga said. “She was [like], 'I'm going to just trust you,’ and it was this beautiful, I think, very healing process for me.”

Grande, who mused that Gaga “immediately felt like a sister” to her, echoed the same sentiments in her interview. “It just felt so good and fun and happy to dip a toe into [Gaga’s] world a little bit," she told Lowe. "You make your music and you do your thing, and then when an artist like Lady Gaga, who has such a magnificent point of view, and such an articulate message to send... you kind of are completely giving yourself over to her.”

More like this
The 12 Most Controversial & Unexpected Grammy Moments Ever
By Jake Viswanath
Jennifer Coolidge Slid Into Ariana Grande’s DMs In The Most Iconic Way
By El Hunt
Ariana Grande Just Wore The Chunkiest Knit Sweater I've Ever Seen
By Dominique Norman
Ariana Grande & Kristin Chenoweth Sing A Wizard Of Oz Classic On TikTok
By Alyssa Lapid
Get Even More From Bustle — Sign Up For The Newsletter
From hair trends to relationship advice, our daily newsletter has everything you need to sound like a person who’s on TikTok, even if you aren’t.