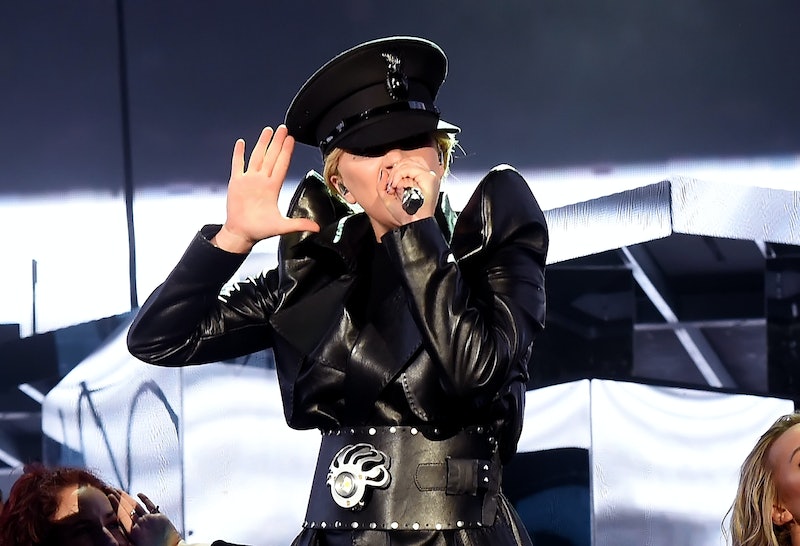 Proving that cyberbullying can happen to anyone, even someone who headlined Glastonbury, Ed Sheeran recently quit Twitter because of all the negative comments. But Lady Gaga defended Sheeran from the cyberbullying with a message that isn't just kind, generous, and a good way of putting a smile on the British singer's face during this unpleasant time. Even better than all of that, it shows us all how to deal with bullies.

As Lifehacker has noted, one of the more difficult aspects of being bullied as an adult is the ambiguity of it: "What’s more frustrating about adult bullies, however, is they’ve gotten much better at hiding what they do." Nobody's giving Sheeran wedgies; they're just directing spiteful tweets at him. As such, one of the most powerful aspects of what Mother Monster is doing is that she's calling out abusive behavior as such, describing it as "hateful and mean."

But, even better than this, she never puts the bully in the spotlight in her Instagram post. She trains the lion's share of the attention on the 26 year old, stressing his talent ("What an incredible talented artist") and the fact that, although he's famous, he's also a mere mortal and thus deserving of the same respect and care anybody with a heart would give the rest of humanity.

Books like 2003's Bullying in American Schools: Causes, Preventions, Interventions believe that bullies engage in damaging behavior because they "crave attention, so they show off and act tough in order to get it from their peers." While this book is obviously dissecting a child bully's psychology, it seems perfectly possible that exactly the same logic could apply to an adult cyberbully. After all, very few platforms empower users to show off in front of more of their peers than Twitter does; that could be why Twitter has had issues with trolls, with The Guardian reporting in 2017 that "Jennifer Grygiel, an assistant professor of communications at Syracuse University, said Twitter still relied too heavily on its users to root out and report abusive material."

Of course, it's not exactly surprising that Stefani Germanotta is such an authority on the subject of dealing with bullies. She co-founded the Born This Way foundation with Prince William "encouraging everyone, including YOU, to talk about your mental wellbeing" and which addresses issues that affect the well-being of young people, including "kinder communities, improved mental health services and more positive environments — online and offline." In defending Sheeran, she's not only living up to the ideals of her own project, but also leading the way for others who might be unsure how best to deal with abusive language and online negativity.