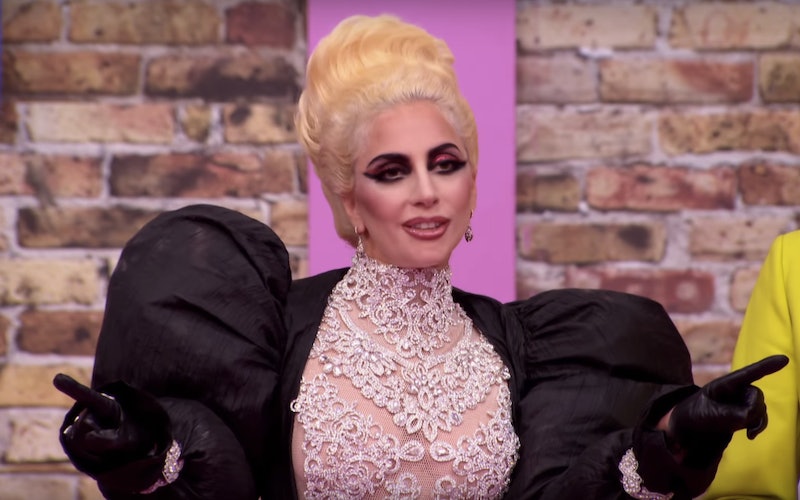 If you thought that Lady Gaga's schedule was full enough, think again. Having just delivered an amazing performance at the Super Bowl halftime show, Gaga announced that she'd be embarking on the Joanne World Tour in 2017. Along with her unexpected, but totally awesome sounding, duet with Metallica happening at the 2017 Grammys on Sunday, Gaga is one of the busiest people on the planet right now. And because she's just an all-round over-achiever, Lady Gaga will be on RuPaul's Drag Race in Season 9. Seriously, where does she get that energy from?

In a promo video for the show's first episode, the singer is dressed to the nines, and is clearly excited to be appearing on RuPaul's Drag Race as a guest judge. In true Gaga style, the singer recited the famous line, "And may the best woman win," which is followed by a lot of excitement from the room full of contestants.

This isn't the first time that RuPaul and Gaga have collaborated. RuPaul appeared on the Thanksgiving special Lady Gaga And The Muppets Holiday Spectacular back in 2013, where the pair performed a duet of "Fashion!" together. Prior to that, Gaga had tweeted RuPaul in Aug. 2013 to ask, "Can I PLEASE be a judge on drag race!" Clearly, the pair are a match made in heaven and perfectly compliment each other's projects.

Contestants of RuPaul's Drag Race have often been influenced by Gaga's impeccable style, and several of her songs have been performed during the Lip Sync For Your Life segment. The American Horror Story actor's individuality, vibrant dress sense, and penchant for reinvention all make her an exciting role model to have. Her expertise and opinions will be greatly valued on the show.

The series premieres on Logo in March 2017, and it'll be exciting to see what other projects the "Applause" singer manages to squeeze in to her schedule in an already crazy year.