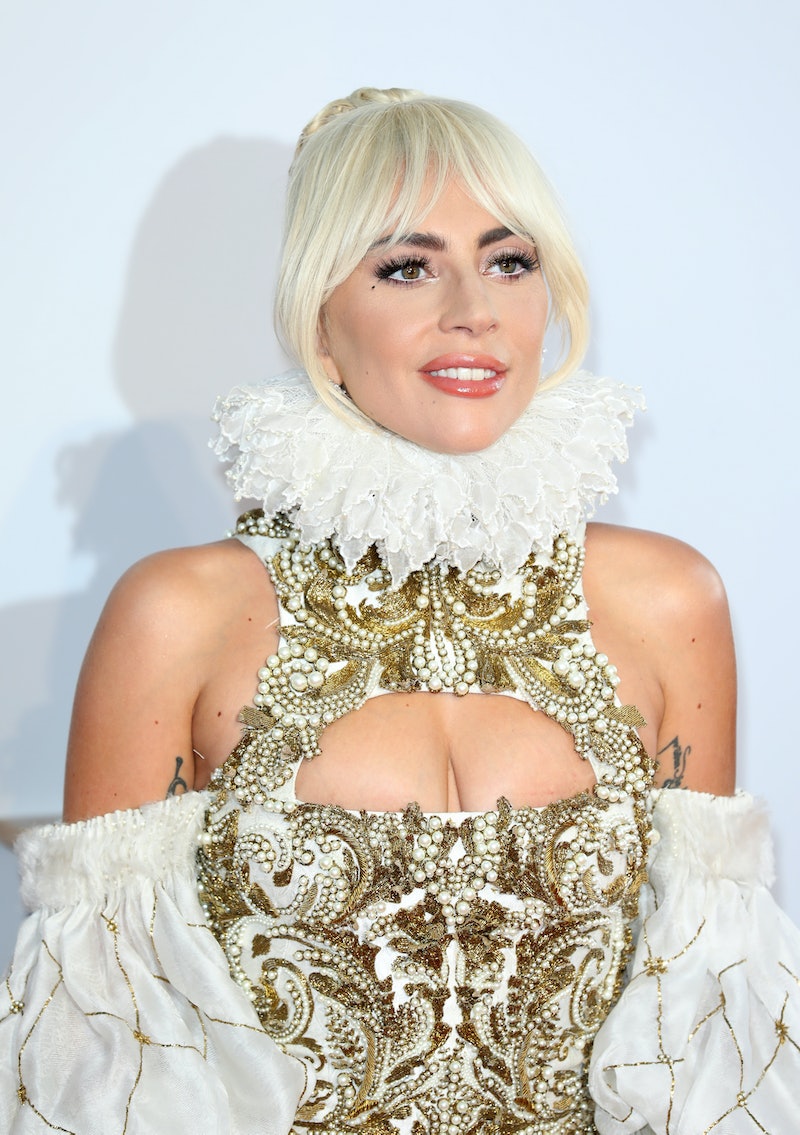 The buzz is real. Lady Gaga's performance in A Star Is Born is generating rave reviews and garnering Oscar talk already — rightfully so. Her turn as aspiring artist Ally is unforgettable. While Mother Monster is known for towering platforms and meat dresses, Lady Gaga's A Star Is Born style is also grabbing plenty of interest.

Ally's look is (obviously) quite a change of pace from Gaga's flashy and flamboyant fashion choices. But Ma Monster put her wildly popular pop star persona aside for the film and it's reflected in her character's easy, breezy style.

Viewers who want to copy Ally's understated but unique, low-key yet luxe 'n' lovely looks — namely the necklaces she wears — can do just that. The exact jewelry is both accessible and surprisingly affordable, actually.

Two of Lady Gaga's A Star Is Born gold necklaces are widely available for purchase on Etsy and eBay, respectively.

Fans and fashionistas can purchase the exact locket that Gaga wears in several scenes in the heart-wrenching film. According to the press materials received by Bustle, Gaga purchased the under $300 locket from Sasha Samuel Jewelry on Etsy. The designer is based in Brooklyn. Since Gaga is a native New Yorker, the locket has even further special significance. You should totally grab one — before it sells out, of course.

The necklace is a locket — so of course it has a peek-a-boo element where you can store something tiny in size but of supreme significance.

Here's a look from the back, which features the designer's name.

You can also grab a replica of the Ally nameplate necklace that Gaga wears on eBay. It's just $13 and displays your connection to the film and the character, which are resonating with audiences and elevating Gaga's fame. Her relatable performance and her easy-to-copy style are down-to-earth and anti-Gaga — but it totally works.

The cool thing about these two pieces is that they can be worn together in that stacked, layered look that remains a viable trend this fall. You can pair them with items you already own or with each other. Your name doesn't have to be Ally to wear it, either.

But here's one better. If you are planning to rock a totally topical Ally costume for Halloween this year, you can grab the name necklace inexpensively. You don't need to go into debt to have a quality, realistic costume. You can also repurpose the jewelry as Halloween and playing dress up fades into the rearview.

So many of Gaga's key looks are stunning and couture — but they don't really translate to the street because they are just so beautifully out there. Rare is the time where Gaga's style is easy to replicate for any occasion. With her role as Ally, the gap and chasm between Gaga's style and that of her fans is reduced.

Have fun culling inspo for Ally's style in A Star Is Born.

More like this
Sydney Sweeney Just Revived The Iconic ‘90s Cone Bra Trend
By El Hunt
The Susan Alexandra Hanukkah Collection Brings Judaica To One-Of-A-Kind Jewelry
By Dominique Norman
The Best Heels For Bunions, According To A Podiatrist
By Margeaux Baulch Klein and Maria Cassano
Kendall Jenner Just Paired A Cozy Sweater With Underwear & Sheer Tights
By Allie Fasanella
Get Even More From Bustle — Sign Up For The Newsletter