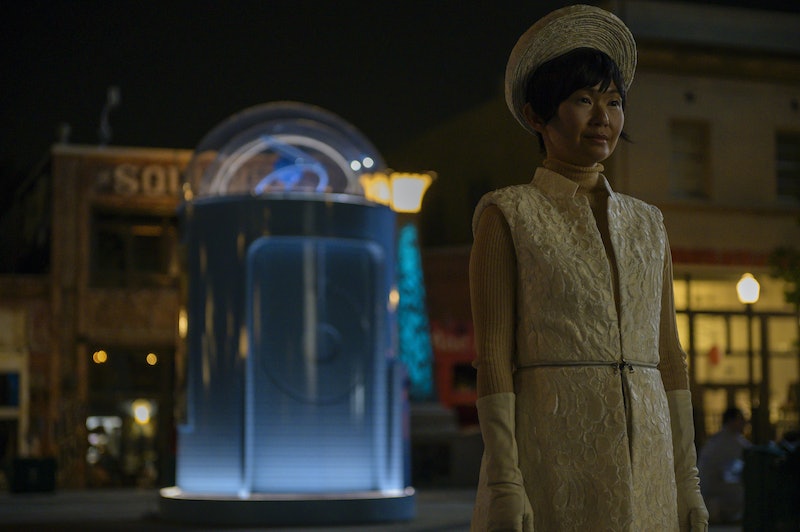 Spoilers ahead for Watchmen. Watchmen is ultimately a multilayered and moving tale about legacy, familial ties, and what we deserve to inherit and create. Though the short (and possibly only) season told a complete tale about the Minuteman Hooded Justice and his granddaughter Angela Abar, the late reveal of Lady Trieu being Adrian Veidt's daughter felt under-baked in comparison. In the end, was Lady Trieu's death deserved, or did Veidt make a terrible and egocentric decision once again?

It all starts with Trieu's mother Bian, one of the Vietnamese refugees that Veidt put to work in his Antarctic lair (while surely calling himself their savior). As we've discussed before, Trieu is named after an ancient Vietnamese warrior who fought against colonization and oppression, and Trieu's mom says a speech pulled directly from legend as she hacks Veidt's computer and opens his sperm bank. "I want to ride the strong winds, crush the angry waves, slay the killer whales in the Eastern sea, chase away the Wu army, reclaim the land, remove the yoke of slavery. I will not bend my back to be a slave," Bian recites.

Bian ends with a hearty "f*ck you Ozymandias," before impregnating herself with his sperm and slipping away into the night.

Years later Lady Trieu finds Veidt in his lair and introduces herself as his daughter, vial number 2346. Like both her father and her namesake, Trieu has grand schemes to save the world from suffering and oppression, but her pleas for financial support (and paternal validation) fail spectacularly. Veidt gives her a cold "pull yourself up by your own bootstraps" speech, proclaims he'll never acknowledge her as his daughter, and sends her packing.

This aborted relationship is crucial to the ending of Watchmen. Whereas Will, Angela, and Dr. Manhattan all find a way to tie their family together and heal, in the end Veidt tears his own apart. Trieu clearly wants her father to witness her ascension by absorbing Dr. Manhattan's powers, since she excitedly rescues him from Europa and revives him the day of. (Veidt's message of "Save Me Daughter" visibly won her over.)

But if the core conceit of Watchmen is that "nothing ever ends," then Veidt ends up repeating his mistakes — with a squid attack, again — and potentially alters history for the worse. After Trieu effortlessly destroys Cyclops' senior management, Dr. Manhattan teleports Veidt, Laurie, and Wade away to his lair, much to Trieu's fury — because the main audience member she cared about, her father, is gone. Veidt then unleashes a frozen squid fall, and the hail destroys Trieu's machine, which falls on her before the powers can be transferred. Trieu ends up literally crushed by her own ambition while Veidt walks away — arrested by Laurie, but still alive.

It's hard not to feel conflicted about this ending, which sees a mass murderer live while his ambitious but assumedly more well-intentioned daughter — who spent years listening to the literal prayers sent to Dr. Manhattan — dies. Constance Grady and Emily Todd VanDerWerff at Vox agreed they "had a really hard time rooting against Trieu," and fan reactions for Trieu are mostly praise for her effortlessly wiping out Cyclops. Sure, Trieu is an eccentric who destroyed Dr. Manhattan, but in other ways she's also a hero. In fact, she does exactly what her namesake promised: she wiped out the oppressors. Unlike Veidt's three million lives lost, as far as we know, the only people Trieu ever killed were white terrorists.

Trieu was also right about quite a few things. She rightfully rips into the white supremacists for plundering and murdering their way across continents. Both her and Will Reeves also agree that with all Dr. Manhattan's powers, he "could have done more" to end suffering, poverty, climate change, discrimination, etc. Trieu's great dream is the one that likely any marginalized person has: if I had limitless power to upend all broken power structures and systemic injustices, what would I finally fix?

Show runner Damon Lindelof told Rolling Stone that though the real big bad of Watchmen is "white supremacy," Lady Trieu was maybe a villain too: "it's probably not a good thing that she had to kill Manhattan to get what she wanted." He went on to admit though that he thought "she might have used that power quite responsibly."

He then revealed why Trieu's sudden ending feels so unearned, and why, ultimately, it's hard to root against Trieu: "The fact that Veidt kills her is more driven by his own ego, because it hadn’t occurred to him to absorb Manhattan’s energy himself."

And that's that: the only reason we really know that Trieu was going to eventually use her powers for evil was because Veidt told us so. But what if he was wrong, as he was wrong about his squid ending nuclear proliferation? Veidt sees his narcissism as being the defining trait that was passed down to his daughter; though she certainly has an ego, Veidt's assumption of who Trieu really is entirely disregards Bian's influence. Her mother was smart enough to get ahold of Veidt's sperm, and the suffering she endured during the Vietnam War clearly informed Trieu's upbringing, enough that she fed those memories back into a cloned Bian. So why does Veidt, a white man who grew up in luxury, think Trieu would make the same mistakes he did?

The rub is she maybe wouldn't have. She very well may have ushered in a new era of peace, green technology, and tolerance, while yes, wiping out the virulent racists off the map. But Veidt couldn't handle the idea of his daughter gaining more renown and power than he ever had — and it's well-documented in the Watchmen comics how envious Veidt is of Dr. Manhattan. In this way the Watchmen show brings the comic full circle: both end with a tragic decision by Veidt, who takes it upon himself to decide the world's fate without a regard for how his decision will hurt anyone else. The show finale is messy, inconclusive, and tragic, just as the comic was.

In the end, Lady Trieu was right, and she probably deserved better than to be a pawn in yet another one of her father's machinations.