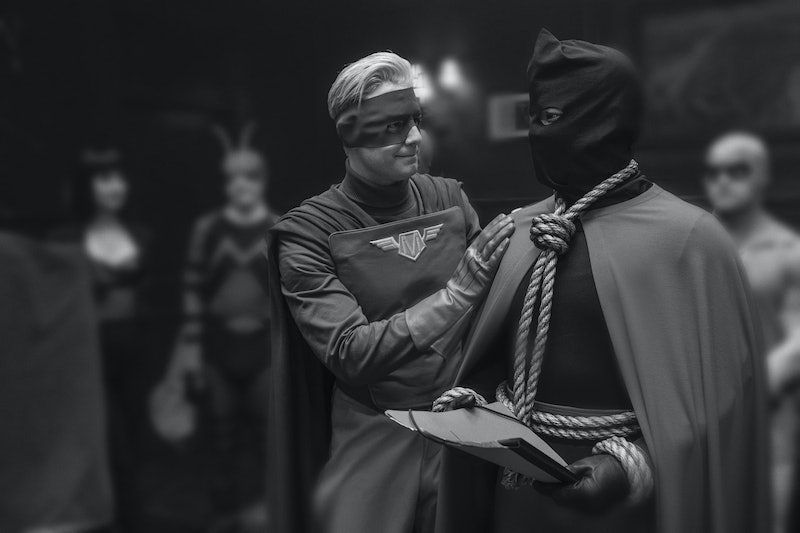 Spoilers ahead for Watchmen. Dr. Manhattan and Lady Trieu are dead. The 7th Kavalry is wiped out. The Millennium Clock is destroyed. Adrian Veidt is going to prison. There was a strong sense of finality to this finale… but there's also a sense of possibility. Fans are bound to have plenty of Watchmen Season 2 theories after the climactic hour, titled "See How They Fly." The biggest question mark is if we'll ever get to see any of those theories actually play out.

"I am deeply, profoundly appreciative for how well received the season has been up until now, and I don't want to feel like I'm ungrateful, but I still don't have any inclination whatsoever to continue the story," creator Damon Lindelof told Variety recently about the possibility of a second season. "I'm not saying there shouldn't be a second season of Watchmen, and I'm not even saying that that season shouldn't feature some of the characters in this season of Watchmen. I just don't know what it should be."

If HBO does decide to renew the series based on the success of this standalone season, it will therefore likely be without Lindelof at the helm. While the creator would likely stay on as a producer, it seems like he's eager to pass the reigns off to a new showrunner/head writer. Good thing, then, that he left that person with plenty of loose threads to pick up. Even while "See How They Fly" ended with a sense of finality, it left the door open for further stories in this exciting alternate universe.

1. The Most Powerful Woman In The World

Season 1 ended on the question of whether or not Angela had really ingested Dr. Manhattan's powers, hidden inside that egg she found on her kitchen floor. Like the screen cutting to black before Leonardo DiCaprio's spinning top started to wobble, the credits rolled just as Angela's foot was about to hit the surface of the water. But surely you don't tease Angela Abar becoming a superbeing and then not follow through on that promise??

Personally, this is the single biggest reason to do a second season. A universe where the most powerful person in the world is a black woman in her 40s? I would like to see it. Furthermore, Angela could prove to be the best possible version of Dr. Manhattan. Jon Osterman was a man made powerful by mistake; he wasn't ready fo the abilities and didn't ask for them, having them thrust upon him by a literal freak accident. Lady Trieu was somebody who actively sought those powers out for herself; for purportedly benevolent reasons, yes, but giving powers that immense to somebody who wants them will always be dangerous.

Angela, on the other hand, would gain those powers neither through accident nor ambition. This power, to Angela, is a responsibility she's accepting; a torch passed on to her, only taken when she was ready and willing. With great power comes great responsibility, and I can't think of somebody better suited to handle that power with responsibility than Angela Abar.

More than 30 years after dropping a giant squid on Manhattan and slaughtering three million innocent people, Adrian Veidt is finally answering for his crimes. Refusing to stay silent any longer, Laurie Blake made clear her intent to turn Veidt over to the authorities in the finale. While Veidt spent the majority of Season 1 desperate to escape his prison on Europa, Season 2 could feature a Veidt desperate to escape a prison of a more earthly variety.

What prison can contain the world's smartest man? What would Veidt become when faced with actual consequences for his actions? Would he experience humble him — or turn him into an even bigger monster? A character as narcissistic and intelligent and charismatic as Veidt is a valuable asset, and it's hard to imagine a second season that doesn't follow up on him. Maybe he can even find a way to save the world without murdering millions; that might be Veidt's only possible path to redemption at this point.

The identity of Lube Man is one of the very few remaining mysteries that Season 1 didn't answer; it would be incumbent upon Season 2, then, to finally solve this bizarre tangent. The supplemental materials on "Peteypedia" have all but confirmed that the popular fan theory is correct, and the slippery subject is indeed Agent Petey. If the show returns for Season 2, it would be great to see him as one of the featured players — not just for fan service purposes, but because it would lead directly into this next theory…

4. Return Of The Masks

So far, both iterations of Watchmen — both the graphic novel and the TV show — have taken place in a world where masked vigilantes are outlawed; while they were popular for a few decades in the mid-20th century, they were made illegal by the Keene Act in the 1970s. By the time of the TV show, cops were allowed to wear masks to protect their identities, but it's still illegal to wear a mask if you don't work for law enforcement. Maybe it's time for that to change…

After it's revealed that the Keene Act was passed by a white supremacist whose son put cops in masks so he could enact a plan to become a superbeing and take over the world — and after a group of famous former masked heroes banded together to foil this plot — it's easy to envision a world where masked vigilantes are back in vogue. Spearheaded by established masks like Lube Man, Pirate Jenny, and Red Scare, these figures can break free from the shackles of the racist institutions they work for and help protect the people as free agents.

Now that the 7th Kavalry and Lady Trieu are gone, the most obvious thing a second season will need is a new villain. If masked vigilantes are on the rise again and Angela is the new Dr. Manhattan, their very presence may result in the creation of a new opposing force. As Vision says in Captain America: Civil War, "our very strength invites challenge, challenge incites conflict, and conflict breeds catastrophe."

The interesting thing about Dr. Manhattan is that he's always been the only superpowered being in a world full of regular people wearing masks. Maybe it's time for the Watchmen universe to introduce a new super-being? Whether through another freak accident or a deliberate attempt to oppose and defeat Angela, it would be fascinating to see how the world is rocked by the introduction of a second supe.

Despite what critics of the HBO show might complain about, Watchmen has always been a deeply political property. The original graphic novel took on the Cold War and the Vietnam War and Nixon, while the television series tackled white supremacy and police brutality and cultural appropriation, among other things. In order to remain fresh, a second season (and third iteration of the Watchmen saga) wouldn't simply be able to continue with the themes of the first season, but rather would have to find a new political/cultural angle to examine under the lens of a superhero story.

The rise of fascism, climate change, gun control, "fake news", the manipulation of our government by foreign powers… there are so many pressing issues our country is facing these days that would make ripe fodder for a new season of Watchmen.

Of the surviving members of the Crimebusters, Nite Owl was the only one who didn't make an appearance in the flesh in Watchmen Season 1. He was referenced by Laurie and Joe Keene, and is apparently languishing behind bars after being apprehended along with his ex-girlfriend Laurie while foiling the 1995 Oklahoma City bombing. While Laurie took a deal and started working for the FBI's anti-vigilante task force, Dan Dreiberg has remained in prison ever since. While Lindelof clearly had other priorities than finding a way to bring Nite Owl into the story, perhaps a second season could finally see the owl uncaged. A reunion between a newly-freed Dan and this changed, embittered Laurie would certainly be fascinating to watch.

Given Lindelof's disinterest in continuing the story and HBO's silence around the issue, it's probably going to be quite a while before a second season hits the airwaves. But given the critical and commercial success of Season 1, Season 2 is probably more a matter of when than if, as long as HBO can find the right person for the job. After all, as Dr. Manhattan said, "nothing ever ends."