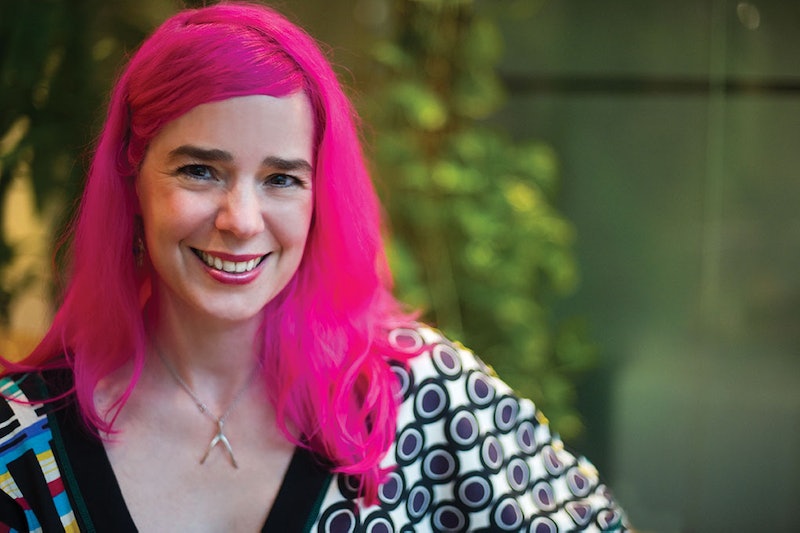 From the title alone, Strange the Dreamer invokes the mystery of many of Laini Taylor’s novels. The first line prepares readers for the beauty of the world she creates along with the ominous journey the characters will face:

“On the second Sabbat of Twelfthmoon, in the city of Weep, a girl fell from the sky.”

On the ground, protagonist and titular character Lazlo Strange seeks more than the life he has. A war orphan and a junior librarian, Lazlo has always been obsessed with the mythic city of Weep, but he has never been brave enough to traverse the earth to find it. But then an opportunity to visit the city presents itself — and Lazlo must seize the day and his dream, even if it means following a hero called the Godslayer and a legendary band of warriors into the unknown. In Weep, Lazlo finds some of the answers he's looking for — but he also finds himself with more and more questions, too. When he meets Sarai, a blue-skinned goddess, he is faced with the hugest mystery of all: he's met her before... but only in his dreams.

National Book Award finalist and New York Times bestselling author Laini Taylor knows how to weave an allegorical story of gods and men, how to build a romance through dreams and delights, and how to make readers' hearts stop when they reach the last page. I had the chance to ask Laini Taylor a few questions as she prepares for the launch of Strange the Dreamer. Here are six things I learned about how she may (or may not) weave politics into her art and how she pushes through the arduousness of the writing process to get to the heart of her stories:

1. Love And War Are Major Themes In Her Novels — And She Believes They Can Oppose Each Other And Bring About The Other

"In fiction—and in life—love and war are just about the two biggest things that can happen to people, and shape their lives the most profoundly," Laini Taylor tells Bustle. "Taken separately, they’re fertile ground for storytelling, and when you mix them, they complicate each other in the most compelling ways. Of course, conflict is the heart of plot, and what sets up a more perfect conflict than love versus war? I think that’s the angle that attracts me most: The idea that enemies can, through connection, change—first themselves, and then the world. The intransigence of hate and hostility is a terrifying thing to me—the idea of hearts and minds that can never be changed, but only perpetuate endless cycles of violence. So I cling to the idea that love, as intimate and personal as it is, is transformative, and can be a force of change in a much bigger way. I hope."

2. She Likes To Blur The Lines Between "Heroes" And "Villains"

"Though I can fall in love with a story that has purely good heroes and purely bad villains, I’m more interested in complex characters, impossible choices, and the murky gray areas between good and evil," she says. "I was a little weary of villains when I started writing this book, and of 'kill-the-bad-guy' climaxes, so I created a story in which the villains are already dead, and we’re dealing with the aftermath of violence and oppression. A lot of stories end with the defeat of the big bad, but this one actually starts 15 years afterwards, and things still aren’t okay. Trauma lingers. It affects everything that people do, and it can obstruct the possibility of peace, freedom, and happiness. That’s the story I wanted to tell."

"I try not to think overtly about politics when I write, but 2016 was quite a year to try to finish a novel!" she says. "Certainly 'power corrupts' is one theme of Strange the Dreamer. It’s not a surface layer, but it has created the situation the city and characters are in. I was thinking more about hate and otherness and cycles of violence, and how all these things inform identity, and how difficult it is to break out of an established worldview. The story sets up the difference between Minya and Sarai and how each perceives the enemy, their perception being shaped by their own unique experience."

She adds: "Imagine, for example, you were an interrogator at a prison and only ever encountered 'the other' in that capacity — being feared and despised — versus someone else who witnessed their ordinary lives, their families, their humanity. You’d see two totally different versions of the same people. Through Minya and Sarai we see that hate is easy to nurture in isolation, but starts to fall apart once you know 'the other' in any meaningful way. That’s always an issue in America, where so many people are proudly isolationist/nationalistic, and current politics are only feeding it."

4. Her Focus Is On Storytelling — Not Message — But The Two Are Intertwined

"I focus on storytelling and not message, but all of my storytelling arises from my own interests and is filtered through my own concerns, so I suppose message slips in," she says. "Some images, themes, and tropes crop up in everything I write — like wings and the longing to fly, travel, loyalty, cake (so much cake), and yes, the divisions between people and groups of people. I was writing a keynote recently for teens, and found that out of everything I want to say to young people, what emerged was a plea for open-mindedness and critical thinking, especially in questioning all information put before them, and even — especially — the worldview they’re raised in. I really do think that the only hope for the future is for young people to see the world with empathy and goodwill, and not as a hotbed of enemies, and not to slip into the trap of believing they’re superior and right about everything. Through Karou and Akiva (Daughter of Smoke and Bone trilogy), and now Lazlo and Sarai, I think that’s my message: to see people as people, and try to understand the forces that have shaped them, and that have shaped you."

5. Though She Makes It Look Easy, She Finds The Writing Process Hugely Difficult

"I love writing, and I also hate writing," she tells Bustle. "I struggle hugely with a persnickety brain that can make the simple act of putting words on the page incredibly difficult. There’s this senseless fear of imperfection that gets in the way of flow. Nothing is perfect! It never will be! I know this, but knowing doesn’t help. Sometimes it feels like I’m writing with the brakes on, and … that’s about how you’d expect it to be. Like, you can drive with the brakes on. It takes longer to get where you’re going, and it’s bad for the car and also really unpleasant, but you can do it. Well, I have done it (the brain, not the car). It isn’t joyful, but you can finish a book that way. The joy sets in afterwards. (And I love revising, so that helps!) I want to say to people who struggle with creating: It doesn’t mean you’re doing it wrong, and it doesn’t mean you’re not meant to do it. It might just mean there’s an extra layer of frustration for you. It sucks, but you have the choice to spend your time bemoaning it or to just keep working. My whole writing career has been figuring out ways to trick my brain into forward momentum, and it’s ongoing. I’m still hoping the great “they” will find a cure. Until then, here I am with gritted teeth."

6. In Addition To The Muse of Nightmares (The Sequel To Strange the Dreamer), She Has Other Projects In The Works

"There are always so many ideas percolating," she says. "I wish I could write faster and bring more of them to life! I have a partially written adult novel I’m keen to finish. It’s not high fantasy, but contemporary with a thread of fantasy. I started it on my first book tour (for Daughter of Smoke & Bone), and wrote more of it on my last book tour (for Dreams of Gods & Monsters). I can feel it growing and developing even when I have to take years away from it. But it’ll be next. And after that a standalone young adult novel that’s sci-fi with a historical setting, a little bit Dickens and a little bit HG Wells. If I could stop time, I’d also love to write some of the stories within Strange the Dreamer, like the mahalath myth and the wingsmiths, and even little glimpses of tales, like the centaur and the lady who are regulars in the marketplace 'Dreamer’s Weep.' What’s their story? Maybe that collection would be called 'Miracles for Breakfast' and look like the book that Thyon takes from Lazlo! Oh, and I really miss Karou and everyone, and daydream about writing a Mik & Zuzana wedding novella."

Strange The Dreamer is out March 28 from Little, Brown Books for Young Readers.