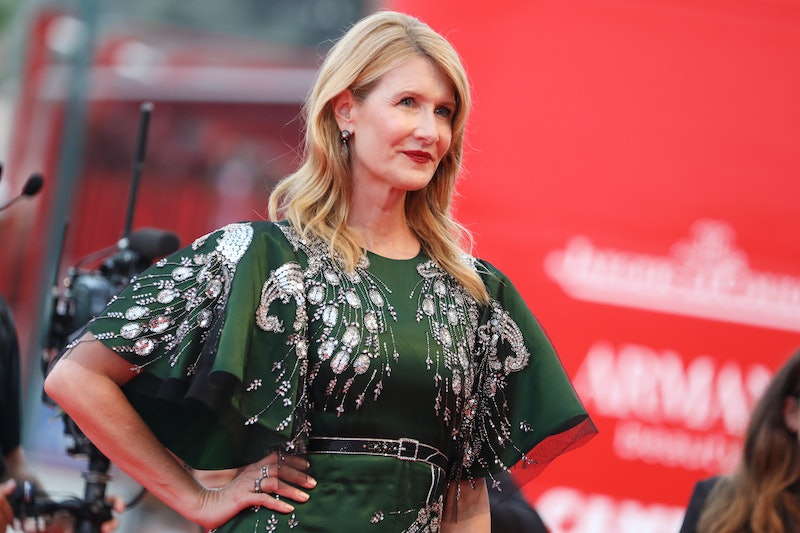 Despite their potential to be one of Hollywood's most iconic (if not, most random) couples, Laura Dern addressed rumors she's dating Bradley Cooper with a pretty clear and concise response, as Cosmopolitan noted. So, just in case there was anyone out there who wanted to see the two actors together, you're going to want to see what Dern had to say about the whole situation.

On Sept. 14, the Big Little Lies actor spoke to Us Weekly at the L.A. Loves Alex’s Lemonade culinary event, during which she shut down rumors of dating the Hangover star, rumors which first emerged after the famous duo was spotted grabbing lunch together in June. Not only are the pair not dating, but apparently they're actually really great friends. Who knew?

“We’re amazing friends. We’re so lucky. And we’re family,” she said. Dern, gracious as always, said that she can't blame anyone for their "curiosity" about their dating status because, as she put it, Cooper is "the greatest." She told Us Weekly,

"I mean, everybody’s always gonna comment about whatever seems intriguing, and he’s the greatest human and one of my best friends in the world. So I don’t blame anyone for having deep curiosity about his life cause he’s spectacular."

Even though Dern and Cooper aren't a romantic item, as the star said herself, the two have such a solid friendship.

These dating reports come a couple of months after it was announced that Cooper split from his girlfriend, Irina Shayk, with whom he shares a daughter, Lea De Seine. Back in early June, People reported the couple broke up after four years together. (At the time, Bustle reached out to reps for Cooper and Shayk for comment on the split, but did not hear back.)

According to Us Weekly, a source claimed that Shayk and Cooper weren't getting along prior to the split. They said, "They haven’t been getting along for a while. They are not in a great place." Additionally, another source claimed, "They split but she is still staying at his house for now. It’s complicated because of the baby."

Shortly before news broke about Cooper and Shayk's breakup, Entertainment Tonight reported that there may have been trouble ahead for the twosome, with a source claiming, "Bradley and Irina have been unhappy in their relationship for some time and have tried to make it work. They both want the best for their daughter, but seem to be coming to terms with the fact that staying together might not be for the best."

As for Dern, she was most recently linked to NBA player Baron Davis in 2017, according to Marie Claire. While the actor has addressed her love life on occasion (just as she did recently regarding Cooper), it is unclear if she's linked to anyone else romantically at the moment.

One thing about her love life is super clear, though — Dern is not dating Cooper, despite what any rumors have suggested. The pair are simply good friends and that's that.

More like this
Everything You Need To Know About Kanye's Post-Kardashian Dating Life
By Bustle Editors
All The Clues About Aly & Zach’s Relationship Status After 'The Bachelor'
By Brad Witter
Paris Hilton & Carter Reum’s Relationship Timeline Includes A 2023 Grammys Date Night
By Bustle Editors
Joey Essex Is Rumoured To Be Dating A 'Love Island' Favourite
By Sam Ramsden
Get Even More From Bustle — Sign Up For The Newsletter
From hair trends to relationship advice, our daily newsletter has everything you need to sound like a person who’s on TikTok, even if you aren’t.