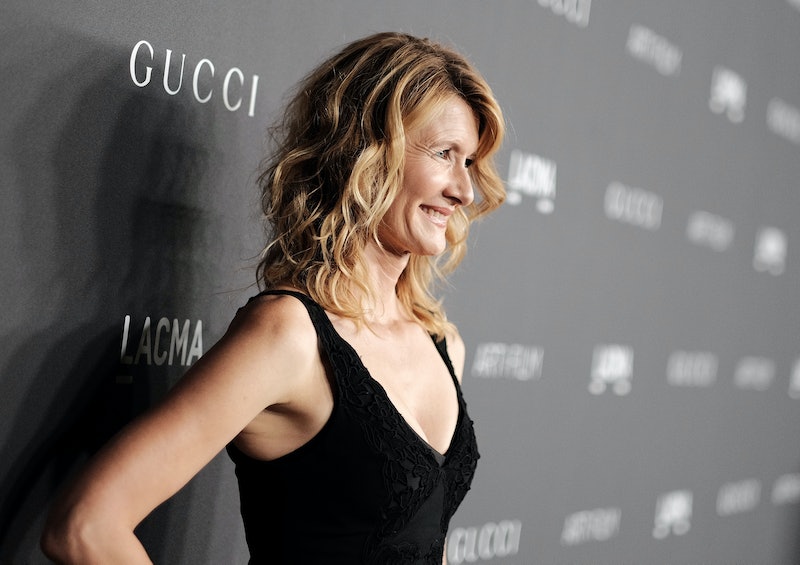 Laura Dern is kind of having a moment. Although she's been acting since the early '80s (and even before that, if you count her childhood cameos in her mom Diana Ladd's movies), the last few years have seen her stardom ascend to a new level. After her acclaimed show Enlightened came to an end in 2013, she's appeared in several high-profile films, from Wild (for which she earned an Oscar nod) to The Fault in Our Stars; been cast in major projects like Star Wars: The Last Jedi and Twin Peaks; and is currently earning raves for her performance on HBO's Big Little Lies. At 50 years old, Dern is getting the best roles of her life, a fact of which the actor is happily well aware.

"One of the journalists I talked to this morning was like, "how about this Dernaissance? It was hilarious," the star says with a belly laugh, sitting at a table in New York's Whitby Hotel recently. "But it does feel like a bit of a coming of age."

For most female actors over 40 — or even 30, if we're being honest — Hollywood is not typically the kindest place. Solid roles for women at any age are hard to find, but older actors have it the worst; a 2014 Indiewire study found that women over 40 made up just 30 percent of all female characters in the prior year's top 100 films. And while there's been some improvement in recent years, with actors like Sally Field and Lily Tomlin starring in high-profile projects, it's still all too rare to see a movie or TV show putting an older woman center stage — let alone a 50-year-old female actor getting enough major roles to be deemed to be in the middle of her own career renaissance.

Yet Dern is proving, one acclaimed performance at a time, that the old school idea that older woman can't, and shouldn't, lead a major movie or TV show is dead wrong. Her characters, whether in Wild or Big Little Lies or her new film, the dark comedy Wilson, are some of the most interesting to grace the screen in recent years, complex, flawed, sexual human beings who can't be summed up by any cliche or trope. They're the kind of roles that Dern says she craved all throughout her career, even as a teenager, and she's thrilled they're coming along now.

"You start as an actor hoping that you will always play radically different and complicated and diverse characters, if you’re lucky, over the course of a career," Dern says. "Being in my 40s, it’s sort of like this time where I look around and go, oh my god, how fun... [that] this year, I was doing several different things at once, and they were all just the most radically different."

That's for sure. Her role in Wilson, the troubled but kind Pippi, is the polar opposite of her character in Big Little Lies, the fierce and highly protective Renata. Still, both characters share an intriguing commonality: rage, a lot of it.

"It’s something as women that we really connect to, that we’re livid for not being seen for so many years, whether it’s in the workplace or with [our] own family," muses Dern.

With Renata, a wealthy businesswoman constantly on the defense, Dern sees the character's anger as being indicative of an unfairly women-shaming world. "I do have sympathy for her, because I’m a mother and I think no matter what kind of mom you are, you live in guilt that you’re not doing enough," the actor says. "That’s your story. You aren’t there enough for them, you’re not seeing enough, you missed an opportunity to talk about something."

"We’re often, as women, very hard on ourselves, and most of us [mothers] in the workplace, balancing the two, there always seems to be guilt," Dern continues. "And the tragedy is, it’s never the men. It’s always other women that are tearing you down in terms of projection and stereotypes, like, 'if she were a good mom she’d be…'"

She trails off, but the point is clear. Renata, Dern explains, is a lot like Hillary Clinton; a woman "of power and of high intelligence who could run the show but must not be a sexual person, not a good wife, not an invested mother."

Dern was an ardent Clinton supporter, and her disappointment over the results of the election is palpable. She's a naturally upbeat person, who bear hugs you when you walk in the room and calls you "girlfriend" moments after meeting, but talking about the way Clinton was treated as compared to her male competitors, Dern can't help but express her frustration.

"A man was running and no one talked about who he was as a husband or who he was as a father," she says, without referring to the current president by name. "So why did people talk about the woman and compare her power with her home life? "

She shakes her head. "It's crazy."

But Dern doesn't stay down for long, soon breaking out a huge smile and nearly grabbing my hand. "I don’t know about you, but I feel a sense of camaraderie like I never have before with female journalists, because the journalist and the actress, as women, would probably be his most hated enemies," she says, once again not mentioning the president's name. "The idea of being in the position where we can use our voices is like being a part of this privileged club."

"What a time to get to work. There’s no time to waste," she continues, and it's clear she's taking her own advice to heart. In addition to her upcoming acting roles, Dern is developing TV shows at HBO with her producing partner, Jayme Lemons, and she says she'd like to direct someday soon, albeit "with some trepidation," she adds with a laugh. Her schedule is about to get busier than ever, but she doesn't mind in the slightest; after all, she tells me with a grin, "we girls gotta try it all."

The actor may have a nearly four-decade career behind her, but the Dernaissance is just getting started.

More like this
'Derry Girls' Creator Teases Exciting Spin-Off Starring These Three Characters
By Olivia-Anne Cleary
Becky G Once Had A Fear Of Speaking Spanish. Now She's Topping The Latin Charts.
By Tess Garcia
Sandra Bullock, Girlboss Extraordinaire
By Matt Harkins & Viviana Olen
'Stranger Things' Star Joe Keery Is Dating An "Indie Scream Queen"
By S. Atkinson and Grace Wehniainen
Get Even More From Bustle — Sign Up For The Newsletter