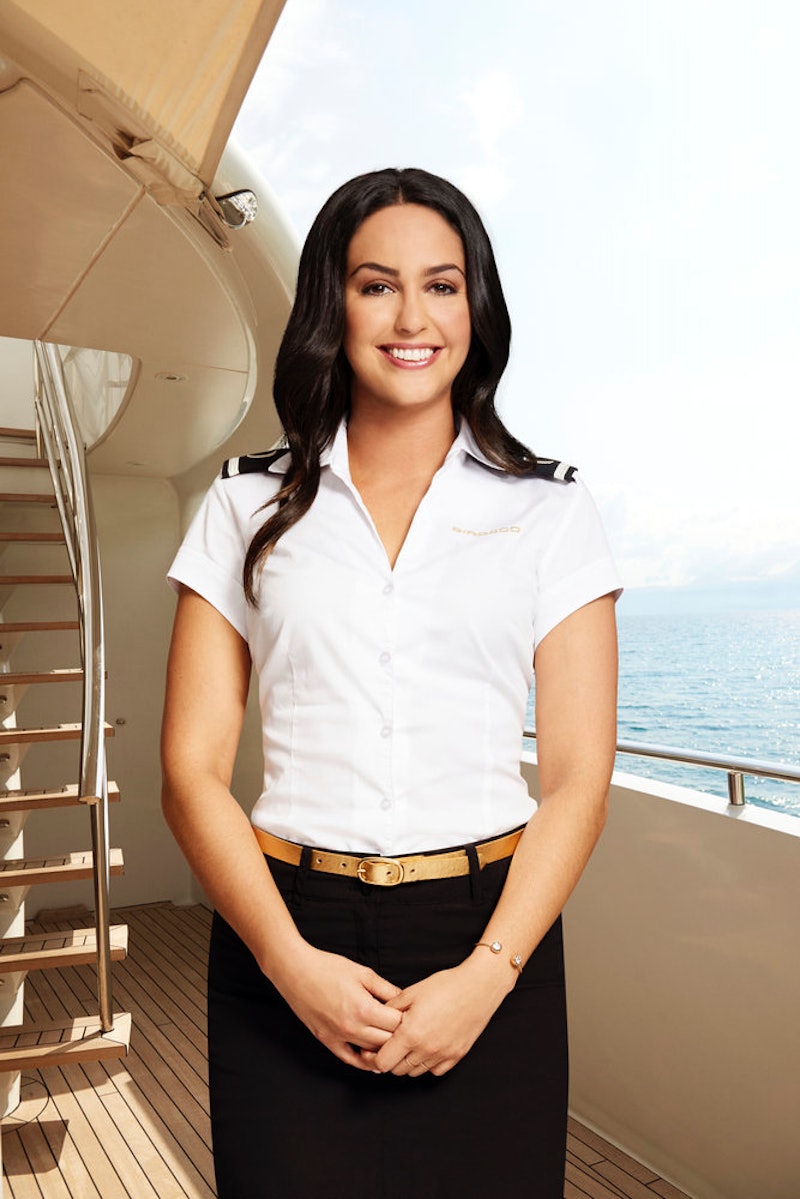 Virginia Sherwood/Bravo
By Allyson Koerner
May 16, 2017

When you throw a group of yachties onto a boat for a Bravo series, there's bound to be drama. That's exactly the case with Below Deck Mediterranean's Lauren Cohen and Bobby Giancola. The two certainly haven't been shy about their awkward and tense situation in Season 2, and Cohen became even more candid about their relationship while chatting with Bustle.

"Bobby and I are not on speaking terms," the steward tells me about her current status with her cast mate, crew member, and former flame. As for why they are no longer in communication, "It has a lot to do with this season [and] what happened before the season." She adds, "I just think Bobby is a drama queen in general. He's the type of person if it's drizzling outside, there's a storm outside, you know?"

Before climbing aboard the yacht sailing around Croatia, Cohen and Giancola had an encounter that turned sour quickly. As revealed during the Season 2 premiere, the two had a short fling in New York City in June 2016. Cohen says she was working in the city at the time and met the deckhand, who was in town for an appearance with their co-star, Hannah Ferrier, on Watch What Happens Live.

"We sort of connected and he invited me out for drinks," the former NFL cheerleader explains. "So, we went out for drinks and we really got along well. ... It was sort of like a first date, drinks, get to know each other, see if we get along."

According to Cohen, things escalated from there. "And then, he invited me to be his date at Watch What Happens Live," she says. "So I went to his hotel, we had drinks there, and I helped him get ready and take photos for his mom and everything." They soon arrived to WWHL, and, for her, this is where things went downhill. "There were two other girls there," she says, and explains that it wasn't what she expected whatsoever. "So what I thought was going to be a date was actually, it seemed to me just kind of [like] a show he was putting on for everyone. 'Look, I brought three girls. Look how cool I am.'"

Giancola spoke on this matter during a May WWHL appearance with Ferrier and claimed he wanted to "get fans involved" so he held a competition on Instagram and invited these two other women. He denied any romantic connection to them. Giancola also said that he never dated Cohen. As for Cohen, she tweeted in early May, "For the record, Bobby and I were never bf/gf. Only went on 1 real date and it didn't even include dinner."

Their drama doesn't end there, because as shown in Season 2, Episode 2, Giancola said that Ferrier "cock blocked" him and Cohen when the two women met (above) at WWHL in June 2016. Ferrier denied that completely, but did admit on WWHL in May that she didn't think it was right of Giancola to invite Cohen and also two other women to the Bravo clubhouse.

Cohen agrees with Ferrier. "I don't think that Hannah's intention was to cock block Bobby." She believes Ferrier was just looking out for her. She adds, "I think she would've done it if it had been any guy, not necessarily just because it was Bobby. "

All of this affected Cohen, and as she admits, "I think the whole situation made me look bad." In the end, she says she came to her own decision regarding Giancola. "I made my own conclusion and my conclusion was, 'OK, let me get as far away from him.'"

Cohen says her first season on Below Deck Med wasn't without drama, and as she see it, it was all thanks to Giancola. She describes their relationship this season as, "Definitely tension-filled. Definitely dramatic. At times, awkward and very uncomfortable overall."

She adds, "I think I would've had a lot better season if Bobby wasn't on the boat, because he pretty much, I don't want to say ruined my experience, but it definitely wasn't what I was expecting."

As for whether or not she'd return for another season if Below Deck Med gets renewed, it all depends on two major factors: "I'd want to see more of the Med, so I think it would depend on where the charter season will be taking place and I also think it will depend on which other cast members are returning."

All the drama aside, Cohen promises that she did manage to have some fun during the season and that viewers will get to see that side of her, too. "I think that the rest of the crew would describe me as really bubbly and outgoing and just always having a good time," she says. "So, you'll definitely see a lot of that from me for the rest of the season."

Below Deck Mediterranean airs Tuesdays at 9 p.m. ET on Bravo.

More like this
Stormi Just Walked A Red Carpet With Mommy Kylie Jenner & Daddy Travis Scott
By Hugh McIntyre
Everything We Know About Chèrie & Jessey’s Abrupt Exit From Bling Empire
By Alyssa Lapid
What’s New On Netflix: A Victoria Justice Rom-Com & The Return Of David Letterman
By Arya Roshanian
Twitter Is Upset About The 'American Idol' Top 3 Results: "Who TF Is Voting?"
By Jake Viswanath
Get Even More From Bustle — Sign Up For The Newsletter