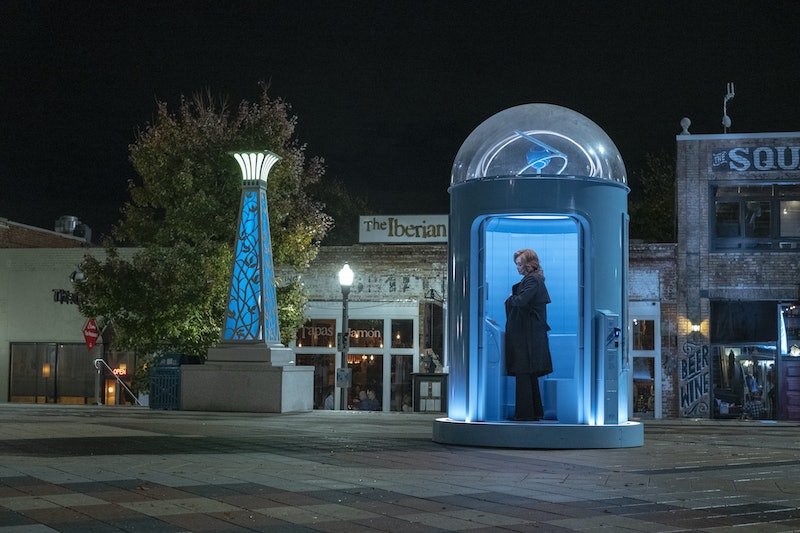 Spoilers ahead for HBO's Watchmen. Silk Spectre is the most important woman in Alan Moore and David Gibbons' Watchmen, and her relationship with the meta-human Dr. Manhattan is a central aspect to the entire story. Silk Spectre and Dr. Manhattan's relationship was convoluted at best and problematic at worst, and once you understand her backstory, the more it makes sense that she is where she is in the Watchmen show. Now going by the name Laurie Blake, Silk Spectre has become an FBI detective obsessed with cracking down on costumed heroes — and she's pretty pissed at one blue, Mars-residing super in particular.

The mantle of "Silk Spectre" has actually been held by two women, Sally Jupiter and then her daughter Laurie Juspeczyk (now Laurie Blake). Sally was a member of the original 1940s group of costumed heroes called the Minutemen, and she forced Laurie into the world of crimefighting too, with Laurie becoming Silk Spectre II at just 16-years-old.

The Minutemen disbanded in 1949, and an attempt in 1966 to kickstart a new group called the Crimebusters quickly fizzled out before it even started (thanks largely to the pessimism of aged Minuteman Edward Blake, aka the Comedian). That meeting marked the first time that many of the Watchmen comic protagonists first met though, from Rorschach, Ozymandias, and Night Owl to Dr. Manhattan and the teenage Silk Spectre II.

Now here's where it gets complicated and, to put it frankly, grossly inappropriate. Before Dr. Manhattan became a glowing blue meta-human who can bend space and time (making him the only character in the Watchmen universe with actual powers), he was a 30-year-old scientist named Jonathan Osterman. Jon is transformed due to a scientific accident, but even as a superhuman, he's twice Laurie's age. In 1966 when he shows up to the Crimebusters meeting alongside his girlfriend Janey Slater, he cannot stop staring at the young Laurie. Laurie's flattered by the attention, and the two soon begin a relationship, to the disapproval of his now ex Janey and Laurie's own mother (who compares sex with Dr. Manhattan to "sleeping with an H bomb").

Unsurprisingly, a relationship between a genetically altered pedophile and a teen girl doesn't lead to lifelong happiness. Laurie moves in with Jon at Rockefeller Military Research Center and stays with him until her 30s, when the Watchmen comic picks up. Laurie is clearly dissatisfied with her relationship with Jon in Watchmen; being able to see the past and future has made him completely disconnected from the present, and he's unable to give Laurie any emotional intimacy. After Laurie discovers that he made copies of himself that she could have sex with while his main body worked in the lab next door, she storms out and eventually begins a relationship with Dan Dreiberg, aka Night Owl.

Jon and Laurie's relationship strains even further when Ozymandias, the main villain of Watchmen, pulls some strings so Jon is confronted on national television with the fact that his radioactive body gave Janey Slater cancer. It didn't, but Jon is so overwhelmed by the prospect that he runs off to Mars. He doesn't see Laurie again until the Ozymandias-engineered apocalypse is nearly upon them, and transports Laurie to Mars so they can have a debate about whether humanity is worth saving.

It's a meeting that frustrates Laurie. Jon forgets she can't breathe on Mars, and she nearly dies before he remembers to put a forcefield around her. Then he pulls out the jerk textbook and tells her if she's sleeping with Night Owl now, he has no interest in saving the entire Earth. "Human life is brief and mundane," he explains, pointing out that the vast emptiness of Mars is much nicer than the messiness of humanity.

But then he pretty randomly decides to stop the apocalypse after all, after hearing Laurie stumble upon a "thermo-dynamic miracle" during her long-winded explanation of why life matters: Laurie realizes the much-despised Edward Blake, who sexually assaulted her mother, is actually her real father, due to a later consensual encounter. Jon is awed by this unpredicted and inexplicable turn of human events, and decides to teleport them back to Earth to eventually join Rorschach and Night Owl against Ozymandias.

The problem is they all fail. By the time they get there, Ozymandias has already deployed his giant engineered squid on New York City and killed three million people, thus achieving his goal of world peace against an "unknown alien threat." Laurie shoots Ozymandias but it fails to hurt him, and then she's roped into agreeing to keep the lie that Ozymandias' squid was indeed from outer space. Jon, meanwhile, seems pretty unbothered by the whole thing and literally goes back to Mars without saying goodbye to her. Laurie finds comfort in Night Owl, and her years-long relationship with Jon, assumedly her first, just hangs unresolved in the air.

The Watchmen show picks up 34 years later, and it's easy to see how this abrupt end has metastasized into bitterness on Laurie's end. Jon accidentally teleported the two of them right into the bloody chaos after the squid attack, so she's now pessimistic about the good anybody with a mask can do, and spends all her time arresting vigilantes. This leads to several tense confrontations with Angela Abar, aka Sister Night. "You know how you can tell the difference between a masked cop and a vigilante? Me neither," Laurie says.

Laurie spends her downtime visiting a Mars-connected phone booth, telling jokes to Jon's voice machine that allude to how Rorschach, Night Owl, Ozymandias, and him are all going to go to hell for what they did that night. Between the end of the comic and the beginning of the show, Laurie has taken it upon herself to be "the girl who threw the brick in the air" like in her story: the one who finally takes down god, Dr. Manhattan.

In this way, Laurie's story has come to mirror her mother's. Despite being sexually assaulted by Edward Blake, Sally ended up falling in love with him, and the Watchmen comic ends with Laurie coming to terms with this messy fact. Laurie is a smart woman who knows, ostensibly, that Jon cares little about her and humanity, but she still feels a sentimentality for him that defies rationality. Laurie taking on Blake's last name confirms that Laurie has accepted the complex, irrational nature of love and attraction.

We'll have to wait and see if all that outweighs her anger, though. It's not yet clear what the car dropping from the sky was about. Was that Jon, or Ozymandias, or someone else reminding her she's powerless? Laurie is emphatically not the sensitive young soul portrayed in the comic anymore, and she has quite a bone to pick with Jon and Ozymandias regardless. If Laurie and Angela figure out how to really work together, those two men may finally just get their comeuppance.