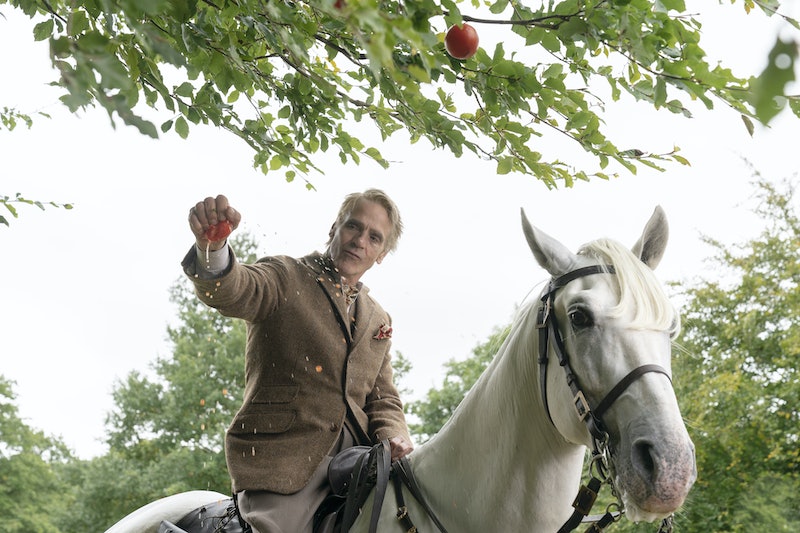 Adrian Veidt, aka Ozymandias, is the smartest man in the world in Alan Moore and Dave Gibbons’ Watchmen comic, and the primary antagonist behind everything that occurs. In the HBO series he’s declared dead, but it’s pretty obvious that Jeremy Irons’ unnamed, reclusive aristocrat is Ozymandias himself. (Press materials for Watchmen name Iron’s character as “Probably Who You Think He Is.”) Ozymandias in the comics shaped the Watchmen world as it stands today, and his weird, secretive activities in the show may just hint at an even more nefarious plan.

Iron’s Ozymandias doesn’t sound or look that imposing, but the danger of Ozymandias has always been his mind. A man of “implacable intelligence” and near-superhuman athleticism in the comics, Adrian is a wealthy genius who develops electric vehicles and genetically altered animals by the ‘80s. Adrian feels his incredible intellect isolates him, and claims the only human he feels any kinship for is the long-dead king, Alexander the Great. Adrian deeply idolizes Alexander, and fixates on how he too wants to “bring an age of illumination to a benighted world.” So he adopts the superhero identity Ozymandias, in reference to Percy Bysshe Shelley’s titular poem about the “king of kings,” and decides to vanquish the “evils that beset men.”

Ozymandias starts off with breaking up organized crime, but soon sees war as man’s greatest danger. He begins to believe global nuclear war is inevitable, and that the only way to stop it is to unite all humans against some alien threat. He definitely doesn’t trust the costumed vigilantes to be able to prevent a war, as none of them have powers, and he sees them as all either unintelligent or morally bankrupt. He doesn’t even believe the godlike Doctor Manhattan, the only actual superhuman in Watchmen, who can bend space and time, can deter a nuclear war, and in fact believes his mere presence accelerates the possibility.

So Ozymandias hatches an elaborate plan that unfolds across the comic. It’s convoluted, but prior to the events of Watchmen, Ozymandias retires from hero work, builds a corporate empire, and uses his massive wealth to buy a secret island and hire scientists to build said alien threat. (For whatever reason, he decides this alien is going to be a giant squid monster, hence, the raining squid in the premiere episode.) In the final chapters, the costumed vigilantes Rorschach and Night Owl rush to Ozymandias’ lair thinking they’ve arrived just in time to stop him, only to learn he already unleashed his squid on New York City and three million people are dead.

Shockingly, he gets away with it. Night Owl, Silk Spectre, and even Doctor Manhattan agree to keep the lie about the aliens when they see that Ozymandias’ terrible bombing literally did cause world peace. The only one who refuses to lie is Rorschach, so Doctor Manhattan kills him. Rorschach did mail his findings, which implicate Ozymandias, to a right-wing newspaper before his death, but considering that paper is shown to peddle conspiracy theories, the real accusations were likely buried.

Ozymandias ostensibly wins, but at the end of the comic it’s clear he’s not satisfied. Before Doctor Manhattan flies off to Mars — where he still is to this day, according to the show — Ozymandias asks him if he did the right thing in killing millions to save billions. “Didn’t I? It all worked out in the end,” he frets. Doctor Manhattan’s answer clearly unsettles him: “In the end? Nothing ends, Adrian. Nothing ever ends.” Ozymandias’ last panel in the comic is him staring unhappily at his map of the galaxy. Doctor Manhattan was the only living person Ozymandias saw as his equal, but as Doctor Manhattan said earlier, Adrian is nothing but a “termite” to him.

That leads us to the events of the show, set 34 years after the comic. It seems Ozymandias has gotten away with his genocide. It’s not clear where he is — his lair in the comic was in Antarctica, but he could also be off-world at this point — but he’s entirely alone, surrounded only by an army of identical servants. In the comic he had a genetically made red and striped lynx, and in the show he’s obviously figured out how to make humans (or at least robots who convincingly look human). He’s also, unsurprisingly, obsessed with Doctor Manhattan.

The play that Adrian forces his servants to put on for him is essentially the story of how the scientist Jonathan Osterman became Doctor Manhattan. “Gila Flats” is the name of where Jon was working when he accidentally stepped into an Intrinsic Field Subtractor, which destroyed his physical body. Only later did Jon figure out how to piece his atoms back together to become an all-powerful glowing blue meta-human. Doctor Manhattan is both the pinnacle of science and someone who completely defies it, so it makes sense that Adrian, in his old age, is still fixated on him.

It’s not clear if Adrian is just acting out his bitterness against Doctor Manhattan on his servants though, or if he’s literally trying to figure out how to make yet another Doctor Manhattan. It seems he’s just torching his servants alive, but he does reference that there will be a use for the bodies eventually. It’s possible Adrian sees his mission of uniting the globe as unfinished, and believes making more meta-humans is the answer. Maybe he wants to conquer the galaxy, or lure back Doctor Manhattan to finally kill him. Or maybe, in his old age, the mass murderer has just become even more casually cruel and bored of human life. Who knows, but it certainly doesn’t bode well for Detective Angela Abar, who may eventually have to cross paths with him.

More like this
Netflix Shut Down 'Bridgerton' S3 Rumours About A “Very Dark” Storyline
By Bustle
This 'Gossip Girl' Wardrobe Error Has Gone Viral On TikTok
By Alyssa Lapid
'The Last Of Us' Has Officially Been Renewed For Season 2
By Darshita Goyal
Ozzie’s Coming Out Scene With Kitty On 'That ’90s Show' Has Twitter Sobbing
By Brad Witter
Get Even More From Bustle — Sign Up For The Newsletter
From hair trends to relationship advice, our daily newsletter has everything you need to sound like a person who’s on TikTok, even if you aren’t.