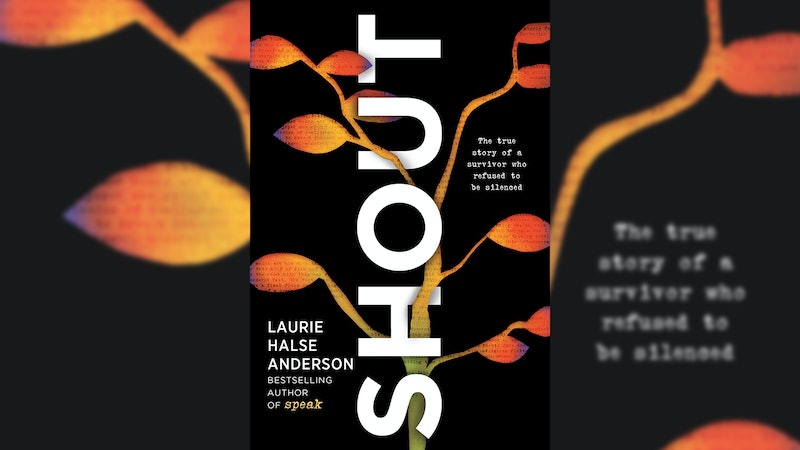 When it was published in 1999, Laurie Halse Anderson's Speak, a finalist for the National Book Award, was one of the first young adult novels to tackle sexual assault and its aftermath head-on. Like so many other teens who have read the book in the 20 years since its release, I was moved by Speak’s unflinching portrayal of the physical, emotional, and social consequences of sexual assault. I felt understood by the book and seen by its author who, like me, seemed to know what it was like to walk the precarious line between victim and survivor. Two decades later, I still feel understood by Anderson through her latest literary achievement, Shout, a book every fan of Speak should read.

This article discusses sexual assault, which may be triggering to some readers.

"This is the story of a girl who lost her voice and wrote herself a new one," Anderson writes in the introduction. A verse memoir about her dysfunctional childhood, her experience with rape, her creative process, and the legacy of Speak, Shout is as much Anderson's personal story as it is a universal one about rape culture in America. Part memoir, part survival handbook, part advocacy guide, Anderson doesn’t pull any punches in describing her own painful experiences. She is even less shy about expressing how angry she is that, 20 years after first writing about sexual assault, it remains a pervasive problem all over the country.

"The taste of shame smells / like stubborn vomit in your hair / lingering no matter how often you wash it / sometimes you have to shave / yourself bald / and start again like a newly hatched chick leaving / the faint rot of broken magic in shattered eggshell pieces / behind you,” Anderson writes about the aftermath of her rape. But she could very well be writing about the shameful truth that, in 2019 America, a person is sexually assaulted every 98 seconds, according to data from RAINN.

For readers who have experienced sexual assault, Anderson’s heart-wrenching descriptions of sexual trauma, and more specifically its aftermath, will hit close to home. "I could hardly think at all / because feelings hid in the closet, under the bed, shadow-cloaked and hungry, dark mountains and oceans of noise threatened to spill over if I opened / my mouth, I was afraid / I'd never stop screaming," she writes, putting beautiful words to those ugly feeling so many victims have come to know.

Anderson talks as openly and honestly about her trauma and its aftermath as she does her recovery and advocacy, such as this verse, which celebrates the power of survivors and their allies:

"The Reckoning / transforms us into tigers / hunting you down / one by one, / dragging you by the nape / of your dirty necks / to face her / to face him / to face them / the souls possessed of the bodies you stole for what you thought was just a few minutes."

Although it takes a few verses to find its footing, Shout is a unique book that should be able to both inspire and educate its readers without overwhelming them. Its format makes what is a painful subject, a pervasive yet heartbreaking truth, just a little bit easier to digest. It is as if each poem, whether its focus is on dysfunctional families or sexual violence or political activism, is there to train to readers how to conserve their emotional energy. As Shout’s author is well aware, the fight against rape culture isn’t a race, it’s a marathon, and to be victorious in the end will require serious stamina.

Shout is filled with rage and fury and anger, but it isn't a bitter book. A compassionate, cautiously optimistic collection, Anderson’s memoir leaves space for hope to grow. Not hope for a miraculous and instantaneous change, but for the hard fought, lasting cultural transformation that the author has spent the last two decades advocating for.

For anyone who has been sexually assaulted or abused, reading Shout will feel like looking into a magic mirror, one that shows not only the dark past but the possibility of a brighter future. For everyone else, it will serve as a kind of guidebook, offering insight, understanding, and some answers to questions that are often too painful to ask, and too heartbreaking to answer.

That is what Anderson set out to do, 20 years ago, with Speak: to connect with readers who have had the same experiences. To say, I am here, you are not alone. Only Anderson isn't speaking anymore, and she certainly isn't alone. She is shouting, her voice buoyed by so many others who aren't afraid to say, to scream, Me too.

More like this
10 Equally Romantic & Heartbreaking Books From British & Irish Authors
By Shahed Ezaydi
Prince Harry Incorrectly Recites Christina Aguilera’s “Genie In A Bottle” Lyrics
By Jake Viswanath
The Mysterious Gunther Corporation From 'Gunther’s Millions' Has Dissolved
By Brad Witter
Rachel Nickell’s Son Wants The Police To Take Accountability Over Errors
By El Hunt
Get Even More From Bustle — Sign Up For The Newsletter
From hair trends to relationship advice, our daily newsletter has everything you need to sound like a person who’s on TikTok, even if you aren’t.