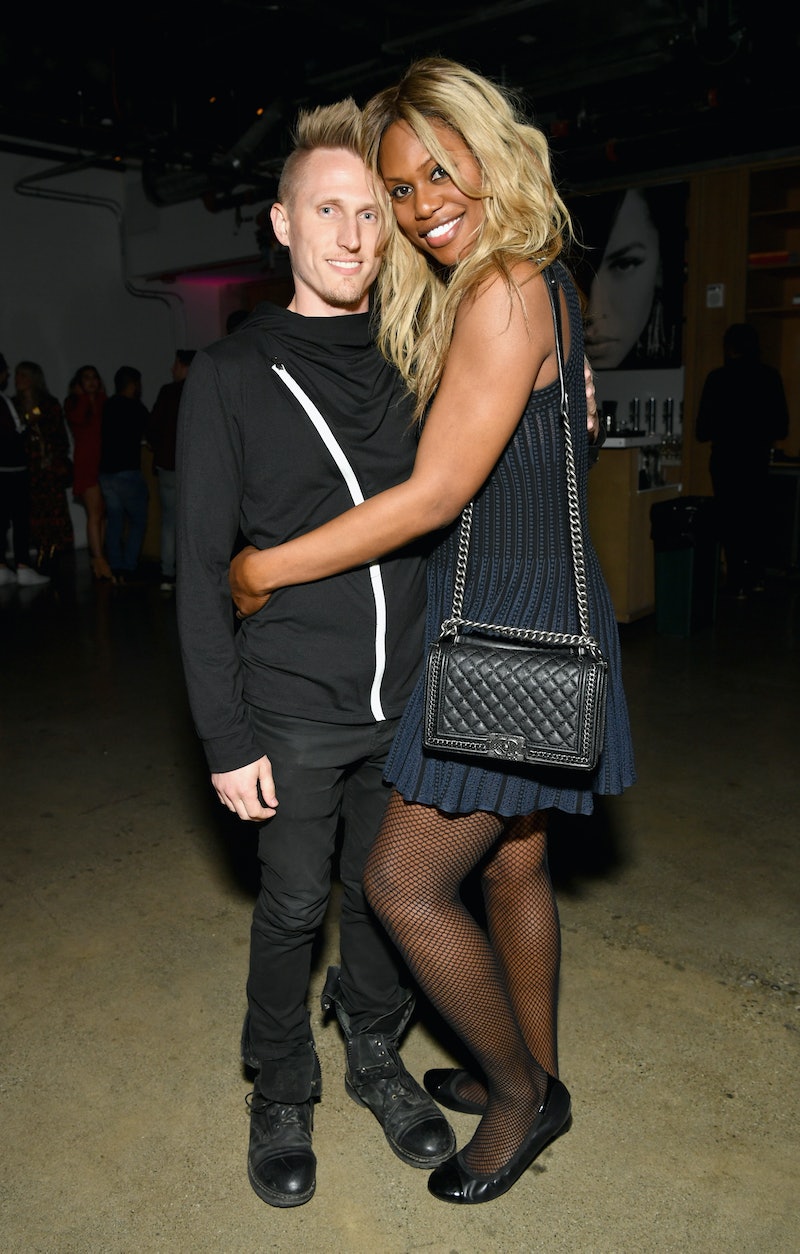 For those who can't help but feel like 2018 hasn't been your year, let this Orange Is The New Black star convince you otherwise. Laverne Cox celebrated her one-year anniversary with her boyfriend earlier this week. She did it with an adorable set of photos that puts their love on full display and makes it clear she's in love and she don't care who knows it.

On Tuesday, July 12, Cox posted an anniversary photo collage with her boyfriend, who is all smiles in each of the four photos. Seriously, four out of five dentist's would definitely agree that he has a great smile. Just look at those pearly whites! Get this guy a toothpaste commercial. Cox on the other hand was serving major face in all four of the shots that have her cuddling up to her boyfriend. “Happy 1 year anniversary babe," she wrote on Instagram. "I love you so much!”

It's hard not to love these photos of Cox and her guy, who she told People back in April, she met on Tinder. In a bit of happenstance, it happened right before she was about to delete the app. “It’s really dumb luck that we met and clicked,” Cox said, adding, “I’m in love. He’s amazing on so many different levels, I’ve never experienced that before."

Their love story started like so many in this new digital age, with a meme. Cox told People that it was the first message her partner — who she hasn't identified by name — sent her and it was a good strategy on his part. “Laughter is huge," she told the magazine, especially at the time when the two met. Cox had just gotten out of a relationship and was just dipping her toes back in the dating scene, the meme felt like a sign. Unfortunately, Cox didn't reveal exactly what meme he shared, so you'll have to pick your own if you decide to make this your new Tinder strategy.

In a March interview with Access Hollywood, Cox said she'd gotten good at screening dating profiles and pretty quickly could know if someone was worth it or not. That meme let her know right away this guy was. "I’m not putting effort into a guy I don’t know yet ... You might not look like your pictures. You might smell," she said. "I showed up with my current boyfriend … like with no makeup. I had some jean shorts. And it worked out."

At the time of the People interview, Cox said that she was she was living in the moment and not worrying about the future. "I’m very grateful that I get to experience this,” she said of her relationship. “It’s so deeply connecting. It’s just a full spiritual experience," adding, "I’ve never felt a man as all-in as he is.”

That is a big deal for Cox who revealed to People that like many people, dating wasn't always easy for her. “For most of us it’s really hard," she said. "It’s been hard for me dating while trans. But there is hope!” Three months later that hope is on full display. The couple is still going strong and looking cuter than ever, which is why it's no surprise she'd want to show that love off on the 'Gram.

In return, she got a love from fans wishing her a happy anniversary. "Happy anniversary with many more to come," a fan named @porchaperry wrote. Another Instagram user named @miss_jalexander commented: "How cute @lavernecox serving her man with Anniversary loving smoochies."

It's not the first time Cox has shared a photo of her mystery blonde. Back in April, Cox shared the first snapshot of her boyfriend, it was photo of the two laying in bed together with heart emoji — 14 of them, which made it clear just how much love she has for her man.

More recently, Cox shared a black and white date night photo of her and her boyfriend. "We cute," she wrote and it's hard to disagree with her. Cox is celebrating her anniversary for everyone to see and possibly, encouraging some people to reactivate their Tinder accounts.