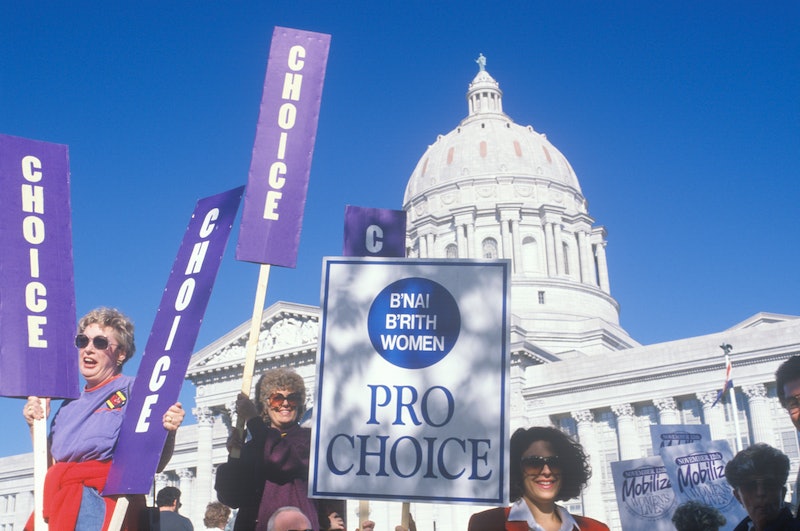 The United States Supreme Court has been asked to consider overturning Roe v. Wade, the landmark 1973 ruling that found that criminalizing abortion violates constitutionally protected privacy rights. Over 200 members of Congress filed an amicus brief in support of Louisiana’s so-called “Unsafe Abortion Protection Act,”which will be going before the Supreme Court in March. If the Court rules in support of the Louisiana law restricting abortion access, it could effectively overturn abortion protections nationwide, The Cut reports.

An amicus brief is a legal document filed by people who aren't technically involved in a case aimed at providing additional information and context to judges. These briefs are meant to influence judicial decision-making by providing arguments to flesh out one side of a case or another. In this instance, the amicus brief pertains to a case called June Medical Services LLC v. Gee. The 2014 case challenged the Louisiana law — which is not currently in effect — that would require doctors performing abortions have admitting privileges at a hospital within 30 miles of their clinic. The law in question is very similar to a Texas law that was overturned in the 2016 case Whole Women’s Health v. Hellerstedt, which found that that legislation placed undue burdens on pregnant people seeking abortions. According to the American Academy of Family Physicians, limitations on abortion rights like these only create unnecessary medical risks for people seeking abortions, rather than offering any improvement to care provision. If the court upholds the extreme restrictions placed on doctors outlined in the Louisiana law, the state would be left with only one abortion clinic.

The amicus brief, signed by 168 members of the House of Representatives and 39 Senators criticizes the physicians, lawyers, and patient advocates seeking to uphold the protections provided by Roe v. Wade. The brief dismisses advocates’ “doomsday predictions” that restrictions like Act 620’s will make abortions inaccessible and therefore unsafe, citing the fact that there are still clinics providing abortions in the state. "Hellerstedt has aggravated the already unworkable standard set out in Roe and [Planned Parenthood of Southeastern Pennsylvania v.] Casey, and the court should reconsider those precedents," the brief wrote. The brief does not acknowledge that restrictions like those being proposed have resulted in the closing down of all but three abortion clinics across the entire state of Louisiana.

Though the Louisiana law, Act 620, implies in its adopted title that abortions are unsafe, the National Academies of Sciences, Engineering, and Medicine found in a 2018 report that legal abortions are overwhelmingly safe. In fact, the report found, abortions are safer for pregnant people when they have ready access to medical care. In states where that access is limited due to the kinds of restrictions that Act 620 would impose, there are more boundaries to effective and safe care.

The burden of requiring abortion providers to maintain active admitting privileges at nearby hospitals would dramatically restrict access to safe abortion services across Louisiana. Beyond the state, too, abortion rights would be at risk — if the Supreme Court upholds Act 620, it would set a precedent that would jeopardize the medical and privacy protections provided by Roe v. Wade.

The case won’t come before the court until March, but until then, advocates maintain that being forced to obtain hospital admitting privileges can take abortion-providing clinics months or even years. Major medical and legal groups — including the American Medical Association, the American College of Obstetricians and Gynecologists, American Academy of Pediatrics — have all signed onto an amicus brief outlining that abortions are extremely safe and that restrictions like those proposed by Act 620 are both medically unnecessary and harmful to potential patients’ health. Advocates will have to wait and see how the Supreme Court rules.