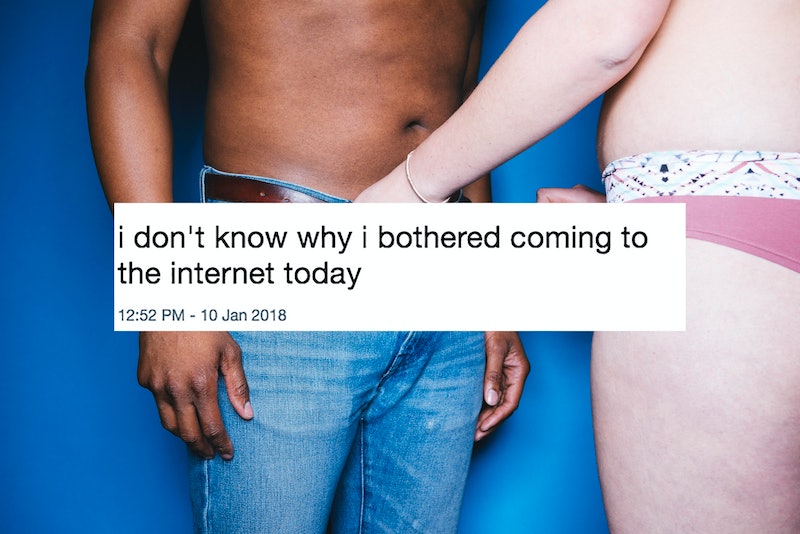 App development seems like one of those fields that we squeezed every ounce of use from very quickly. Inviting itself to the party is LegalFling, a blockchain-based app that generates consent contracts for people before they hook up. Aside from the fact that consent is an ever-shifting entity that can't be hammered out and then expected to remain static, should making conversations about consent "easier" by automating them really be the goal here? The fact that face-to-face communication about consent is so difficult for so many people points to a skill that needs to be built, not an inconvenience to be simplified by app. (Bustle reached out to LegalFling, but did not receive an immediate response).

LegalFling works by combining the features of a dating app with the features of a contract signing app using blockchain technology, a decentralized and encryption-secured records database that was originally designed for bitcoin transactions. Users fill out their sexual preferences on the app, then match based on mutual preferences. If they want to get in touch, LegalFling lets them send a "Fling" via third party messaging apps like WhatsApp, Telegram, Facebook Messenger, or text. If both users accept the Fling, they then draft a "Live Contract" together, which basically looks like an in-app version of an old school yes/no/maybe list. Users check off the sexual acts they consent to and leave off the ones they'd prefer not to engage in. Blockchain technology makes the contracts private to the signatories and resistant to modification or tampering after the fact.

If one of the parties later changes their mind, they can revoke consent in-app "with a single click." But if someone feels so unsafe that they can't revoke consent verbally mid-hookup, how likely is it that they'll be able to untangle themselves from the encounter to fiddle with their phone? It just doesn't seem very practical. However, if a user does manage to tell the app there's been a breach of contract, then they can deploy an arsenal of penalties, from cease and desist letters to payments. As much as I love the idea of financial restitution in exchange for having your boundaries violated, this, too, seems like a feature that could be exploited.

There are a few scenarios in which LegalFling seems useful. For example, you can get a legally binding contract put in place against distributing nudes or sexually explicit video before sharing them with your partner, which may actually be an effective way to combat revenge porn within the constructs of the legal system. And as Daily Dot points out, the app could be a handy tool for sex workers to negotiate contracts with clients. Of course, this doesn't offer much legal recourse in places where sex work is criminalized, but things like contractually agreed upon financial penalties for canceling sessions or for crossing negotiated boundaries mid-session might be helpful here.

But for non-transactional sex, the limitations of this app were obvious to people. And Twitter picked up on them right away, with no reservations about roasting LegalFling's understanding of consent.

Also, This Idea Is Patently Unsexy

People Have So Many Questions

Basically, the internet doesn't really think this is a viable way to navigate consent. If the concept of consent is baffling to someone, then it's important that person needs to practice having conversations about it, either with a partner, a therapist, or with another support human. Outsourcing complex emotional work like this to a black and white technology is positively dystopian.