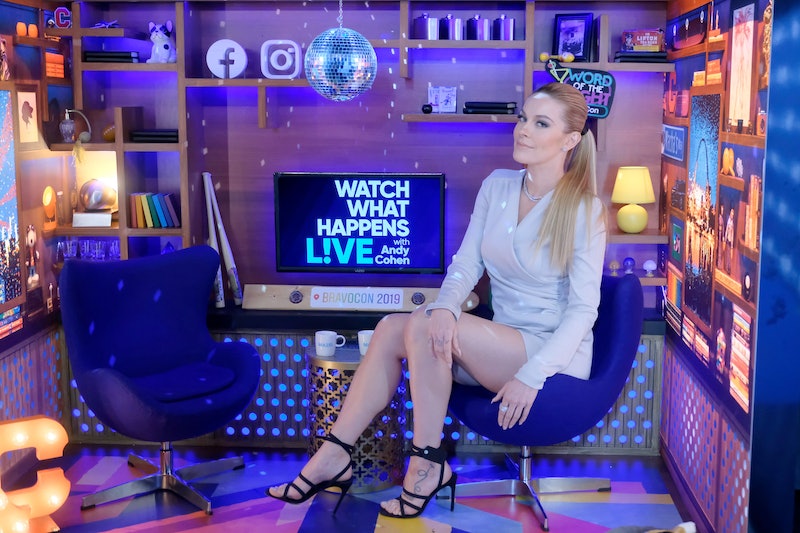 Three months after Bethenny Frankel decided to leave the reality TV franchise that made her famous, the Big Apple is ready to introduce its newest star. On Friday, November 15, Leah McSweeney was added to the Real Housewives of New York cast during the show's star-studded panel at BravoCon in New York City. Shortly after the news broke, the fashion mogul — who is founder and CEO of the brand Married to the Mob — confirmed the news herself in an excited Instagram post. "It’s MOST OFFICIAL, B*TCHES!" McSweeney wrote, alongside a photo from BravoCon. "I got the Apple & I’m bringing it to the Real Housewives of New York for season 12.

McSweeney was first spotted filming alongside her fellow Housewives back in August, according to People, and is a longtime friend of costar Tinsley Mortimer, which should likely help her out as she begins to navigate the drama-filled friendships of RHONY. While she and her new costars didn't share much about what fans can expect from Season 12 of the reality franchise, the entrepreneur did tell host Andy Cohen that she was impressed by her fellow Housewives thus far. "They’re all unique individuals, but they’re all very badass," McSweeney said.

McSweeney's casting comes in the wake of Frankel's sudden departure from RHONY, which the latter announced back in August. "It’s time to move on and focus on my daughter, my philanthropy and my production partnership with Mark Burnett, producing and starring in shows which represent a shift in the conversation for women," Frankel told Variety in a statement at the time.

The SkinnyGirl founder was one of the original RHONY cast members when the show premiered back in 2008, before departing the show briefly in 2010. She starred in two spinoff shows, Bethenny Getting Married? and Bethenny Ever After, centered on her marriage to Jason Hoppy and the first years of motherhood, before she rejoined the show during its seventh season. Now, with her departure from RHONY ahead of Season 12, Frankel will move behind the camera, to develop and executive produce unscripted projects in partnership with Burnett and MGM Television, according to Deadline.

However, in true Housewives fashion, Frankel's departure came with its own drama, as Ramona Singer told People in August that the entrepreneur never informed her costars that she was thinking of leaving the show. Explaining that she "respects the fact that Bethenny has decided to go on with other endeavors," Singer added that, "I’m only disappointed that Bethenny did not inform her costars that she’s not coming back to the show."

Still, with the new addition of McSweeney, it seems like the Real Housewives of New York — and the franchise itself — is focused on the future. Fans will get a chance to meet the newest cast member for themselves when Season 12 of RHONY premieres in 2020.