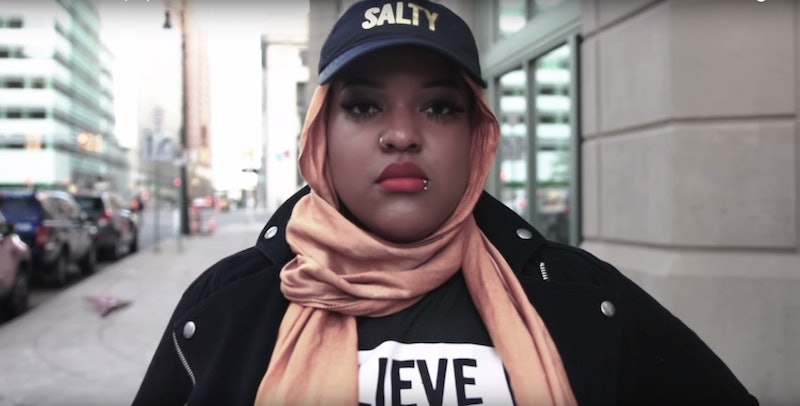 "Do I make you feel uncomfortable?" The question is posed by plus-size style blogger Leah Vernon, of Beauty And The Muse, in the introductory scenes to her latest video Muslim Girl Dance #BodyProject. "Are you afraid that if we could love, really love, our true selves, imperfections and all, that we'd be free?" she continues. Only a few second in, the video feels like an admission of self-love. It's a project that, as Vernon later tells Bustle in an interview, was made to show viewers that self-love is something only we can find (and claim) for ourselves.

For two minutes, Vernon dances on the streets of her hometown of Detroit, MI, to a beat that lends itself to smooth vogueing. She glides and sways on the pavement, the words "salty" and "believe" printed boldly on her hat and t-shirt. Her hijabs and turbans are always in plain view. Her body proudly takes up space against the backdrop of the city.

"I believed that a fat girl dancing, a Muslim girl dancing in the streets of Detroit, would make for a powerful statement, a conversation on what an American Muslim looks like," Vernon wrote on the video's accompanying blog post. She wanted to show what a "modern-day fat girl" and an "overly educated black girl" can look like, too.

Vernon exists at the intersection of many identities with which certain Americans are uncomfortable. She is fat in a world that has historically valued thinness. She is Black in a society that prizes whiteness. She is Muslim at a time when Islamophobia is undeniable, rampant. And she's a feminist in an era during which women's rights feel constantly under attack.

Rather than shrink or silently wait for things to grow more progressive, Vernon is taking action. In doing so, she's copping to the love she has for herself — another trait that women, in particular, aren't frequently taught to work toward.

"Society gets off on us fearing one another. Fearing our own selves," Vernon tells Bustle. "[But] imagine if we all loved our bodies: the diet industry, retail, and beauty industries would come crashing down. There’s power in loving yourself and being free. Freedom, to me, means living my best life unapologetically and without societal restraints."

When Vernon first came up with the idea for her dance video this past spring, she knew she wanted to combine spoken word, runway stances, vogueing, and dancing in one creative medium. She knew she wanted "to do something that you wouldn't see a fat, Black, Muslim girl doing. Like ever."

When Vernon first began blogging, her plan was to focus on fashion and beauty alone. Beauty And The Muse, and her subsequent social media pages, would have no political or social justice dialogue, or talk of mental illness or religion. What she quickly learned, however, is that people wanted more. "Slowly, I started to see that my mere presence was a political stance," she tells Bustle. "I was showing women to go against the grain. Go against standards being set. I found that I had a duty to be truthful ... and use my platform to spread tolerance." She began to see that the fashion was important, particularly for plus size consumers who still didn't have the options and boldness of their straight size counterparts. Being visible in the many intersections of her identity was important, too.

Of course, the more popularity Vernon (who has over 16 thousand followers on Instagram) amasses, the more trolls come out of the woodwork. People claim that she cannot possibly be both a feminist and a Muslim. In light of her new video, others have said that a Muslim woman should not be dancing in such a provocative way, let alone in public.

"What I choose to call myself and what I believe is no one’s business," Vernon tells Bustle. "It’s just sad that people box other people of different faiths and cultures into this unrealistic category. We are who we are and that’s it."

Although terms like "body positivity," "fat acceptance," and even "feminism" have gone mainstream enough to be readily discussed across many different mediums, Vernon ultimately hopes that folks who watch this video and follow her work learn that only we as individuals can change our narratives. "I want people to understand that body love will never come from anyone or anything but YOU," she tells Bustle. "That on the road to self-confidence and body acceptance, you have to be present and open to it." You have to make the conscious choice to be proud of your body, your skin color, your faith, or your style, and stop making apologies.