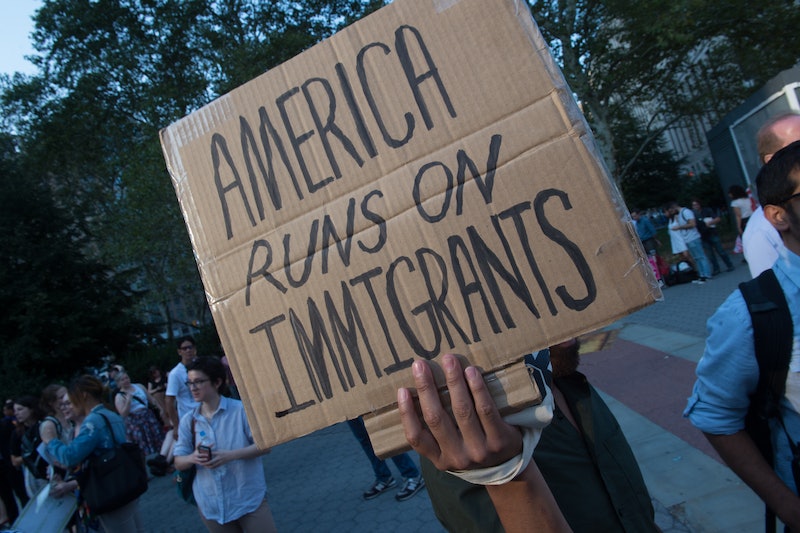 On Tuesday, the Trump administration announced it would put an end to the DACA program, which allows children and young adults who were brought to America illegally to remain in the country without fear of deportation. The only somewhat positive announcement was that the administration had planned a two-year phase out of the program, rather than begin abrupt deportations of children. But, it turns out, the full talking points from the administration included much harsher directives then were relayed on Tuesday. A leaked White House memo urged DACA recipients to "prepare for departure from the United States."

CNN posted a copy of the memo on Tuesday evening, and said that it was a background document sent from the White House to offices on Capitol Hill, and was forwarded to CNN by multiple sources. The memo provided both background on the White House's DACA position for supporters and surrogates, as well as talking points related to President Trump's announcement today that he would begin phasing out what he called the "amnesty-first approach."

One of the talking points made the deportation process for the nearly 700,000 current DACA recipients seem much more imminent than the gradual, two-year phase out that was discussed on Tuesday by Trump and other administration officials like Attorney General Jeff Sessions and White House Press Secretary Sarah Huckabee Sanders. The memo said that they should use their remaining legal time in the country to begin preparing for their departure, whether that meant securing necessary travel documents, or applying for other immigration benefits.

Department of Homeland Security spokesperson David Lapan confirmed the legitimacy of the talking points to CNN, and said that while the agency hopes Congress creates a solution for the 700,00 people currently protected by DACA, those people should begin planning for the future, even if that means self-deportation.

"As noted, we expect Congress to pass legislation so this will hopefully be a moot point. However, of course we would encourage persons who are in the country illegally to depart voluntarily, or seek another form of immigration benefit for which they might qualify. No one has an entitlement to live in the United States illegally. Individuals have an independent obligation to comply with the laws that Congress passes, in all contexts."

DHS said on Tuesday that if DACA permits were to expire with no alternate program in place, than those people would then be considered undocumented immigrants, who would be eligible for deportation. And while it said that those individuals would not be sought out or prioritized for deportation by Immigration and Customs Enforcement, it also said that ICE would be able to access the DHS' extensive records on former DACA recipients.

It seems that the White House aimed to soften the blow of its DACA announcement by leaving out some of its harsher initial language. But no matter how you slice it, the clock is now ticking for these young immigrants who know little outside of a life in America, yet still may be forced to leave the country and return to an unfamiliar homeland.