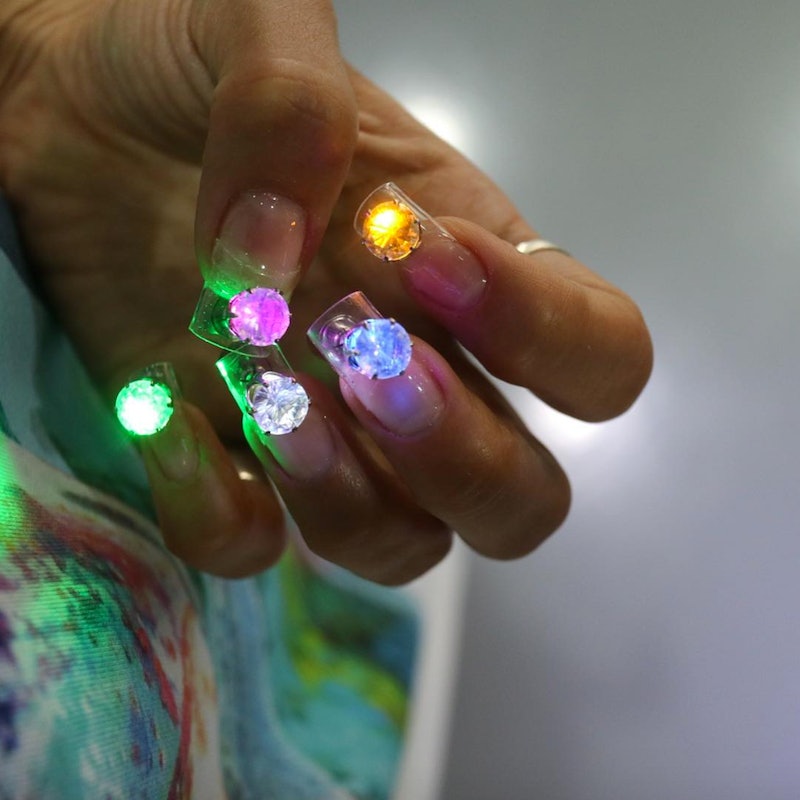 Remember the woman who started the shattered glass nail art trend? Well, she may have just started the next big thing: LED light disco nails. Yes, South Korean nail artist Park Eunkyung of Nail Unistella pioneered the look on her Instagram account, and it's pretty darn stunning. Using extra long (and super shiny) clear fake nails, Park applied a different colored gemstone-style light to the tip of each nail, using green, lavender, blue, orange, and purple. If you look closely, you can see that each light is basically like an earring, with a post going through the tip of the nail, with a backing on the other side. The resulting look lets the shiny, shiny lights take center stage (as they should)

She posted her first video of the new nails, along with the fun comment, "I got LED on my nails!" as well as the hashtag #LEDdisconail. Right now, there are only six posts using that hashtag (all from Park's own handle, @nail_unistella), but let's hope it catches on like wildfire soon — after all, who doesn't want rainbow-lighted fingertips? It's definitely an ideal look for the rave set, but seriously — pretty much anyone can get on board with the concept.

Don't you love how they twinkle and flash? Some of the lights even change colors!

It's a lot of extra work, but the flashy results are more than worth it. Is it a trend you'd consider taking out for a spin?

Cue Saturday Night Fever, because these absolutely mesmerizing nails truly live up to the disco name!