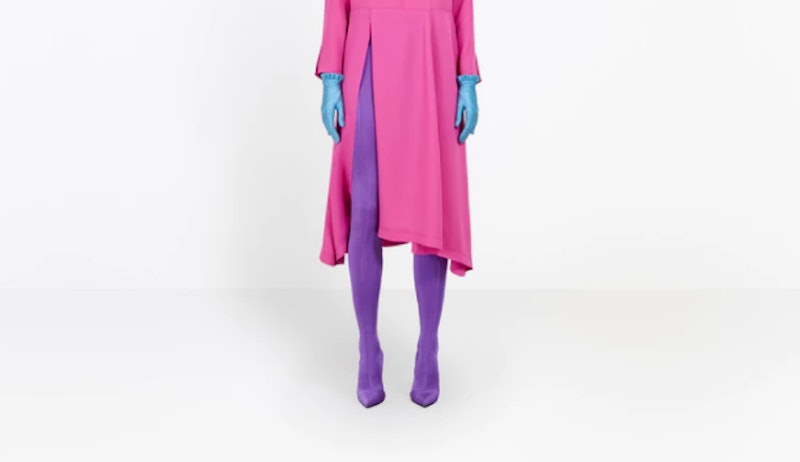 Now that the "are-leggings-pants" debate has been settled with a firm victory for "yes," it's time for a whole new shake-up in the leggings world: The legging boots trend. You read that right. Legging boots are a thing now, and you'll have no idea how to feel about it.

Legging boots are exactly what you imagine them to be — boots which extend not just to the calf, or the knee, or the lower thigh, but either to a high part of the thigh or, in some cases, all the way up, where they become a pant-like (I for one am not willing to declare them pants/not pants before the rest of the internet weighs in) all-in-one.

They appeared on the fall and spring 2017 runways in Balenciaga and Balmain shows, and now, according to PopSugar, some of Instagram's favorite models have embraced the look, including Kendall Jenner, Hailey Baldwin, Miranda Kerr, and Kylie Jenner.

Kylie and Kerr both stepped out in Balenciaga, while Kendall scooped a pair of snakeskin Balmain legging boots off the fall 2017 runway.

While the majority of looks featuring these boots seem to employ skirts that make it impossible to tell just how high-rise they are, Balenciaga flirted with the concept of just boots under a top on the spring 2017 runway, and that is truly where the question lies.

I don't know yet if celebs' enthusiasm will turn legging boots into the next yoga pants, but it could be a real possibility.

Check out some legging boots looks below.

Here's Kylie sporting Balenciaga Spandex boots in a pastel grape. This pair isn't as high as some other versions of legging boots, but Kylie's wearing them under just a top, in true Balenciaga style.

Here's Kendall showing off just how high these boots can go, much to her Instagram followers' confusion.

"What are thoooooose," someone responded. Another user chimed in with a straight-up, "Wtf are those."

Meanwhile, here is Balenciaga's pair that ride all the way up to the waist, like an actual pair of leggings.

Baldwin's cherry-red Fendi Cuissard boots sit lower than some of the other legging boots, but they still fit the bill (another thing the internet at large will have to debate if this trend sticks around).

Whether legging boots seem cute and trendy or outlandishly eye-roll-worthy, it's impossible to deny they're catching on fast. Now all that's left to do is wait and see if they stick around.