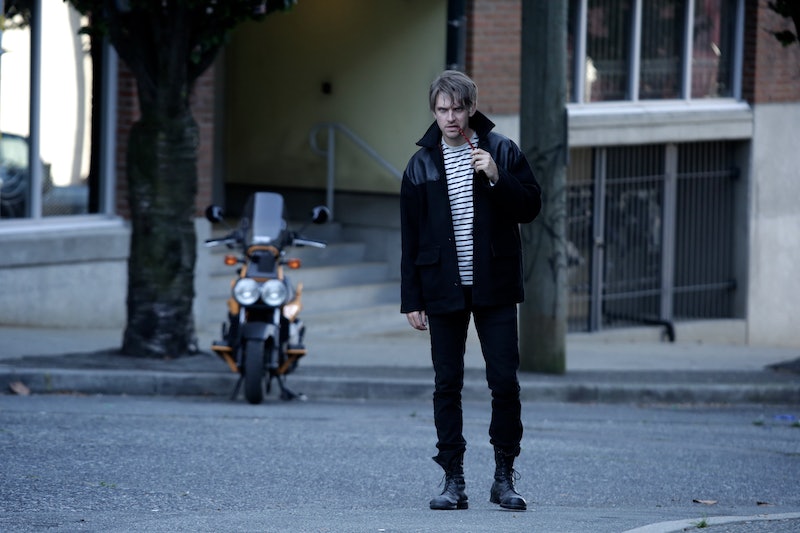 Upon watching Legion, audiences were forced to ask one simple question, "Wait, what?" This, of course, lead to other questions like, "What is happening?" or "Is all of this — like all of this — happening in David's head?" or "Why does everything look like it's happening in the 1960s idea of what 2017 looks like?" Of the many questions that the show asks and has yet to answer — the one that is probably causing the most nightmares is who the Devil With Yellow Eyes is on Legion. This mysterious Devil, who looks like the most terrifying possible interpretation of Humpty Dumpty ever concocted, haunts David Haller's life at every inopportune moment.

There seems to be something about the color yellow that inspires some of television's most terrifying villains. The Devil With Yellow Eyes follows in the footsteps of The Man With The Yellow Eyes from Supernatural and The Yellow King from True Detective. It's clear that yellow is NOT a color to be trusted.

Like its fellow yellow-themed monsters, The Devil of Legion is introduced as a haunting presence that is has yet to be seen in close proximity. It's always lurking in a corner or hiding off in the distance. The Devil With Yellow Eyes likely won't reveal itself any time soon, but there are a few possibilities as to its true identity.

A Figment Of David's Imagination

The events of Legion themselves veer into the fantastical early and often — the most powerful mutant in the world breaks out of a mental institution recruited by rogue agents to help him discover his powers. The out-of-this-world plot gets a lot more confusing when it's clear that David's mind is not trustworthy. He remembers things incorrectly and he sees things that aren't there. Perhaps The Devil is just another thing that only he can see which represents his own fear. Or perhaps it represents something else...

A Spector From David's Past

Before David takes Melanie Bird's hand and decides to begin his journey towards controlling his powers, he gives a long and meaningful look back at The Devil With Yellow Eyes, who is hiding in a conveniently placed cave. In any movie or film, if a character has to choose between their past and a possible future, then looks back at something, then turns back and chooses the future, you can bet your life that whatever that character was looking back at represents the past. Although The Devil With Yellow Eyes looks decidedly inhuman, it's just human enough to have been a real person before David's mind distorted the image. The Devil With Yellow Eyes could be a very real figure that tormented the young mutant in his childhood that left a traumatic memory that ripples throughout David's life.

It's An Actual Character From X-Men Comics

Legion is the least-obvious X-Men adaptation in existence. For one, the name X-Men isn't used anywhere, and there are no clear connections with a larger comic universe as is normal for a comic book adaptation at this point. However, fans suspect that one of two comic book culprits could be the true Devil With Yellow Eyes. One suspect is the Shadow King, an evil yellow-eyed mutant capable of possessing humans that David Haller has previously encountered in comics. Others suspect it's Mojo, a literally spineless alien with a penchant for violent television and a similar physical build to The Devil as he's seen in Legion.

If Legion has proved one thing so far, it's that this will be a truly unpredictable series. It's best not to get to comfortable with whatever your theory for who the Devil With Yellow Eyes is, as the show could go in a million different directions that no one has even considered yet. Until then, do what you can to keep this horrifying figure out of your own nightmares while Legion fans search for answers.