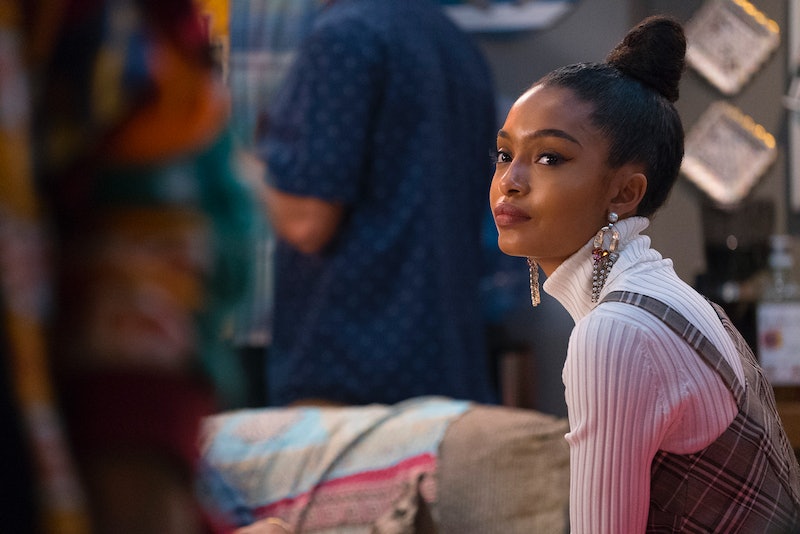 If one goes to college to find oneself, Zoey Johnson is not doing all that well, considering how lost she's been feeling lately. Her fashion designs are not flowing like she thought they would, and frankly, she’s having a hard time finding the motivation to even make anything at all. It doesn't help that Luca, her boyfriend, is being called a "genius" by her friends. And this week, while Zoey is questioning her own expectations of genius, Leikeli47’s grown-ish video drop underlined Zoey’s point about how society processes — and casts aside — female artistry.

While Zoey is suffering through designer’s block, the rest of her friends are feverishly talking about this surprise midnight album drop that’s allegedly going to happen from some anonymous artist. Who could the artist be? Kanye? Drake? Neither? Soon, the conversation turns to what makes a "genius" when it comes to art. Funnily enough, every one the group is calling out happen to be men and Zoey is happy to note this lack of diversity.

Why are men like Kanye West looked upon as geniuses, but women, like Beyoncé, who are just as powerful and prolific are “hard-working?” Why don’t women get a seat at the table of profound artistic ability? It’s like many in the group never thought of it, and the irony is that the video drop at the end of the episode is from a female artist. The Brooklyn-bred rapper Leikeli47’s “Tic Boom” is an explosion of bad-ass visuals and sounds. Not only is the song a banger and the video, directed by Edgar Esteves, captivating, it's also a super 2019 way to release a music video. Some might even venture to say that the whole package, is...well, genius. (If you need to watch it again, Leikeli47's spokesperson tells Bustle the video will be available on Vevo and YouTube after the Freeform 24-hour exclusivity period, which is also a particularly genius form of marketing on all fronts.)

Zoey is taking this convo to heart given that she's been all up in her feelings about her own passions and career goals. She is stressed because the ideas just aren’t coming to her anymore when she stands in front of her sketchbook or starts draping fabric. Zoey always thought she really wanted to be a fashion designer, ever since she was on black-ish every week, and now that she’s actually putting her childhood dreams into practice, Zoey is finding that it’s not what she thought. The pervasive idea that the work of a creative person should come easy has led her to believe that she might as well drop the design lab. If only our culture didn't discredit the work of women and romanticize the work of men (who are not always great people or all that great at what they do), Zoey might feel differently.

Genius in general is seen as effortless in our culture — Zoey laments that Luca’s designs just seem to fall out of him at the last minute, perfectly formed — and that could be a reason why female artists are looked over when referring to musical geniuses. There is nothing effortless about being a woman in a patriarchal society. So much brain space is used up just to be taken seriously that it can be assumed that a woman isn’t in it to be a “genius” in the first place.

Women are also not allowed to go off on wild tangents, not allowed to speak their mind when making off-kilter statements or assertions like so many men who are lauded as "geniuses" often do. If a female artist went on one of Kanye West’s Twitter rants, she would be dismissed as hysterical and out of control. But when Kanye has a new spin on slavery (there is no fresh take on slavery, by the way), it’s considered genius. Or at least up for a lot of debate.

Ultimately, grown-ish undercuts the crew’s points in using Leikeli47’s new video as its closing scene. Leikeli47 is definitely in on the joke, as lyrics from another of her songs, “Attitude,” include the phrase: Kelis is god/So is Beyoncé. Leikeli47 is calling out the erasure of women, especially in art, too. She tells Bustle, "These young women are in a face-off with their inner fears; that’s why it sometimes may look like they’re engaging in a face-off with themselves. It’s about facing whatever your Goliath is and chopping its head off. That’s what ‘Tic Boom’ is about. It’s about owning your moment, mastery, and doing it afraid if you have to.” And that's where Zoey is — figuring out how to "own her moment." For now, she needs to find the inspiration she once held for design and channel this muse into something new.