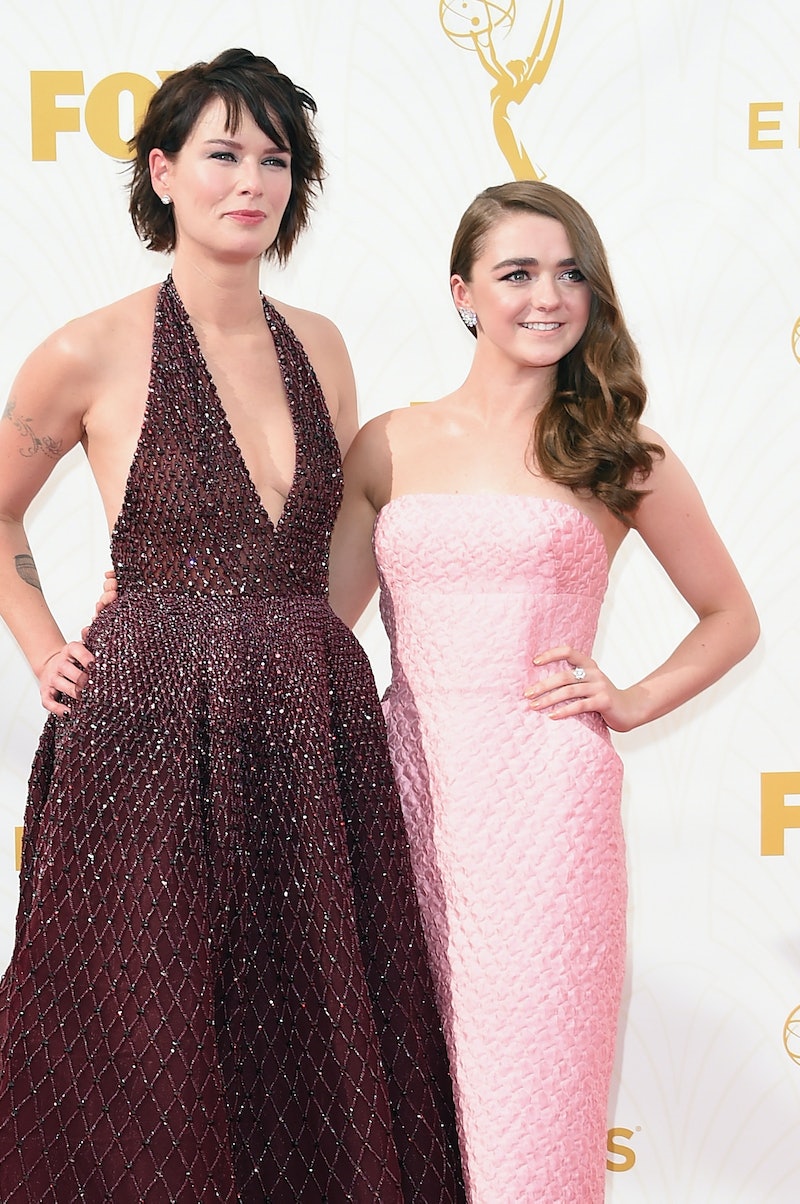 There was no love lost between Cersei Lannister and Arya Stark, but their off screen counterparts' bond is very real. In a recent post on Instagram, Lena Headey teased she's working with Maisie Williams again. It seems Headey is directing a music video for French DJ Madeon starring Williams. This marks the second time that the Game of Thrones actors have collaborated on a music video — earlier this year, Headey directed her 22-year-old GoT costar in Freya Ridings' video for "You Mean the World to Me."

Teasing the news on Instagram, Headey didn't go into detail about what song the video is for, but she did share some intriguing stills from the shoot. It looks like Williams may have to channel her inner Arya one more time, because her character is covered in blood. Then again, so is her male costar. Maybe the song has Bonnie and Clyde vibes? GoT devotees will have to wait for the music video's release to find out for sure. For now, Headey is looking forward to putting the video together, per her caption.

Seeing the GoT cast reunite for new projects is always fun, but there's something extra special about seeing Headey and Williams working together again. Despite not appearing in any scenes together after Season 1, the two actors formed a close bond. In a March interview with Metro, Williams discussed her longtime friendship with Headey.

"I’ve been close with her a long time. When I first met her she didn’t have any kids and I was 12 years old and now she's a mother of two," the New Mutants star told the outlet. "We've been with each other for these crazy times in our lives. Knowing someone for a decade is huge and she's always treated me like a grown up. She always respected me on a real level and for that I'm so grateful."

And the feelings of friendship and admiration are definitely mutual. Williams interviewed Headey for Net-A-Porter in 2017, and when she asked her older co-star how to stay sane in the business, Headey was quick to tell her friend that she had nothing to worry about. "I’ll always love you, Maisie, because you’ve just remained," she said. "You guys Game of Thrones’ younger cast members have all handled it brilliantly. I just think it’s great; you’ve grown up with this, and you’ve remained delightful."

The duo's latest project is a reminder that even though Game of Thrones is over, Headey and Williams' friendship is still going strong — and so are their collaborations.

More like this
Beyoncé & Blue Ivy Performed A "Brown Skin Girl" Duet At Her Private Dubai Concert
By Brad Witter
Ariana Grande & Kristin Chenoweth Sing A Wizard Of Oz Classic On TikTok
By Alyssa Lapid
'The Queen’s Gambit' Season 2 Tweet Wasn’t From Anya Taylor-Joy
By Mary Kate McGrath, Jack Irvin and Grace Wehniainen
8 Easter Eggs From Taylor Swift's “Lavender Haze” Music Video
By Shahed Ezaydi
Get Even More From Bustle — Sign Up For The Newsletter
From hair trends to relationship advice, our daily newsletter has everything you need to sound like a person who’s on TikTok, even if you aren’t.