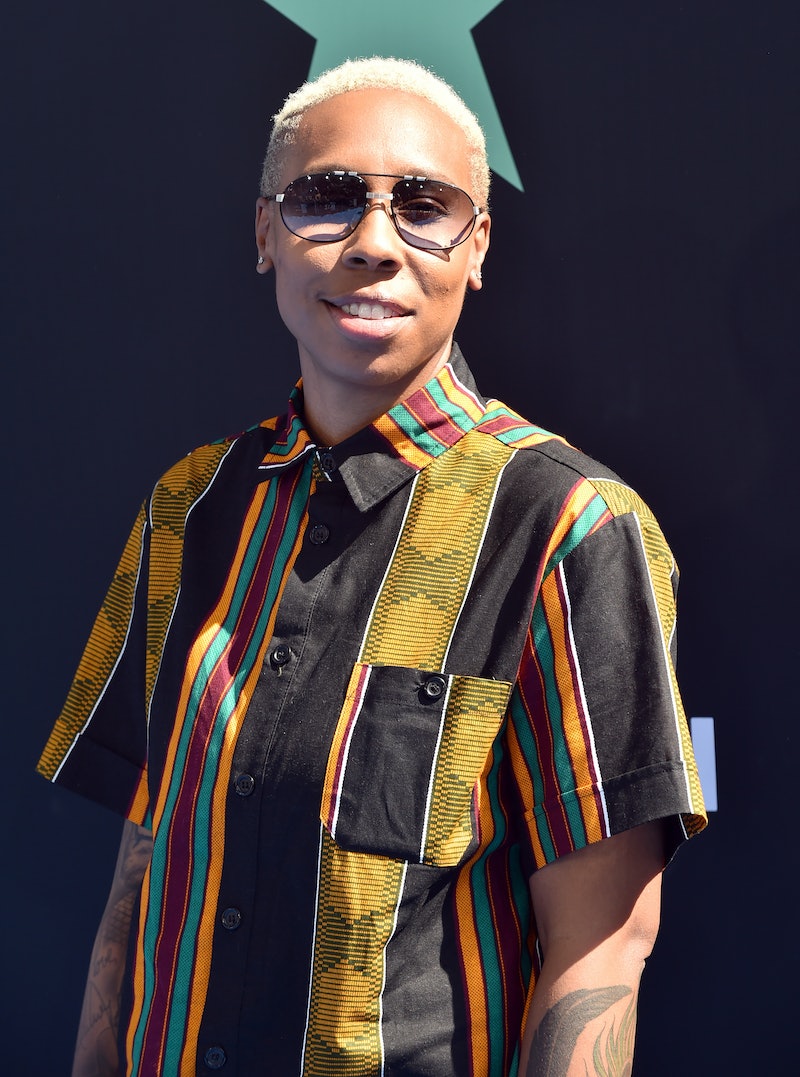 The BET Awards isn’t only a space for Black and brown people in entertainment to show off their talents, but also their statement-making fashion choices. Lena Waithe just wore a '90s-inspired Kente cloth short sleeve button-up top and velour pants on the BET Awards red carpet, pairing the look with aviator sunglasses, and a bleach blonde buzz cut — and it is everything fans could have asked for.

Anyone who's a fan of the filmmaker and TV show-runner knows that Waithe has no problem creating bold looks by jazzing up the snazziest attire — and clearly tonight was no different. Opting to wear old school fashion certainly comes as no surprise for Waithe. Just by scrolling down Waithe's Instagram page, it's easy to see that her style has an old school flare. From wearing color-blocking windbreakers to black turtlenecks and chains, the artist is all about rocking retro styles. The actor also rocked a pair of sneakers to the BET Awards to keep her look cool and comfortable.

The Chi creator is only a presenter for the evening, sharing the first look at her new film Queen & Slim, but the writer and producer is a winner in her own right. Waithe is all about being herself and her mantra shows throughout her particular fashion choices. Challenging societal norms in her looks is what Waithe is best known for as an up-and-coming fashion icon, but not without the help of her trusty stylists.

Waithe has been described as a "soft stud" and she's certainly serving '90s Martin vibes all throughout the top. But according to an interview with Out Magazine, Tiffany Hasbourne has been a crucial part in helping Waithe create her memorable (literal) statement-making stud looks, including her custom Carolina Herrera Pride flag cape for the 2018 Met Gala.

"[Lena] explained to me that she was a female who loved to wear men's clothing," Hasbourne said. "And so she wanted a suit for the Emmys. It was then my job to figure out how to still put the divine feminine energy into a masculine suit. And that was what we got in her Emmy suit."

Both Waithe and Hasbourne are proclaimed "sneakerheads," so it seems there's never a debate for wearing practical shoes during events and found a quick shoe fix.

"We don’t just love them, we collect them all the time," Hasbourne said. "Our biggest challenge is how to get sneakers that are either hard to acquire or that nobody can get. So over the past couple of years we have built relationships with different brands."

Even in Waithe's casual wear for red carpets, she still makes her subtle statements. The star was decked out in a Shirley Chisholm top at the 2018 MTV Movie & TV Awards where she accepted the ceremony's Trailblazer Award. Chisholm was the first black woman elected to Congress. Evidently, trailblazers rock other trailblazers in their red carpet looks.

Lena's fashion proves that the biggest statements make for the sharpest looks — and her BET style continues that trend.