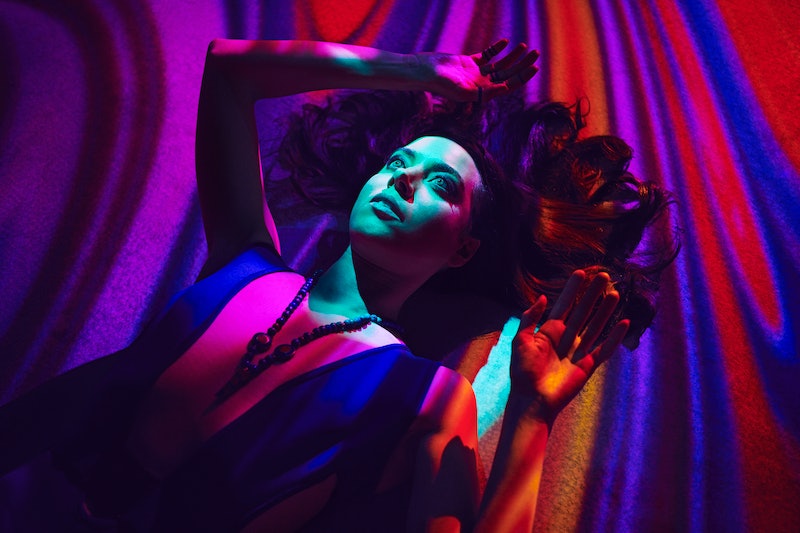 In many ways, Legion is a show about change and rebirth. We've seen our protagonist David Haller (Dan Stevens) go from a victim at the psych ward, to a tortured hero, to an outright villain who is determined to alter the past in Season 3. At his side through it all has been Lenny (Aubrey Plaza), who has been David's friend, his unwilling antagonist, and now the closest thing he has to family. She's grown from being a vessel for and prisoner of Amahl Farouk (aka the Shadow King), into her own person, of sorts: though she lives in David's sister's body, she has a personality that's mostly her own. And when we see Lenny in the Legion Season 3 premiere, she has a new gig as David's right-hand man in his radical new commune. Things are changing for Lenny, and according to Plaza, it just might be possible for a not-quite person like Lenny to become self-actualized.

"The final season is the closest we get to who Lenny's ideal kind of aspirational self [is]," Plaza tells Bustle during a phone interview with journalists. "I think that we find her in a place where she's more at peace than she has been in the last season."

Lenny has taken a long, winding road to get to this point. While she's a morally grey character, her story has also been marked by a significant lack of agency, with most of her suffering coming at the hands of men. We know Lenny had a rough childhood, and has spent most of her time on Legion being controlled by someone other than herself. She was killed early on in the first season when David and Syd accidentally swapped bodies and Syd-as-David half-phased Lenny through a wall. Her body was destroyed, and her consciousness was trapped by Farouk, who used her likeness to taunt David. This was all done while the real Lenny was imprisoned in Farouk's mind — one jaunt to the astral plane revealed she had tried to commit suicide several times, but Farouk just brought her back. Farouk finally revived her in David's sister's body, which grants her freedom, but is yet another calculated move in the ongoing war between the two.

"I think that Lenny is a survivor," Plaza says, when asked if Lenny is a good person or not. "And in my mind, she's doing the best she can at all times."

Considering Lenny's ongoing struggle to control her own narrative, it's refreshing to see that at the start of third season, Lenny seems to have found her own groove. Hailed as "The Breakfast Queen," Lenny not only has power and respect in David's new commune, but she also has a family of her own: the lackadaisical Salmon and their unborn daughter. (It's not fully explained how Salmon is carrying Lenny's child, but Legion has never been great with explanations, after all.)

At the start of the season, Plaza says, "Lenny is really living her best life, as they say. She's kind of right where she wants to be. She's not being tortured by the Shadow King. She has power and control and a clear kind of idea of what she wants, finally." It's notable that this season is the first time we really see Lenny as she is, rather than through the lens of David (who we know by now is an unreliable narrator).

Perhaps it's the Amy side of her, or it's just the real her we never knew (or that David never let us see), but fans will meet a Lenny this season who may feel unfamiliar: one who's willing to trade in mayhem for marriage, even if that means leaving David's side. "I think that ultimately she wants to be happy," Plaza says. "And she knows what she loves and she wants to settle down, however that means for her."

Her connection with David is a complex one, though, even more so now that Lenny has absorbed some of Amy's personality and desires. "That's always kind of [Lenny's] link to David," says Plaza of Amy Haller. "[It's] the reason why she's still, you know, drawn to him and has a connection to him."

It's clear Lenny loves David in her own way, but at the same time most of her suffering can be attributed to the fact that Lenny has been used as collateral damage between David and his enemies. So how does one go about untangling that knot?

Not without a significant amount of pain, as audiences will find out. It's clear that Lenny has endured enough, and her love for her family is undeniably going to put her at odds with David, a man who feels he's owed love and is so determined to have it that he's willing to manipulate those around him. Legion has always portrayed Lenny and David as a sort of dysfunctional, codependent pair, but how does one who desires freedom remain with someone who thinks of himself as an all-controlling god?

That's ultimately the beauty of Legion: David was portrayed as the hero until suddenly he wasn't, and now that his true intentions are revealed, other characters like Lenny come into sharp focus. Lenny may be what Plaza calls a "lovable trickster," but she is also still human, and she deserves, in the end, to feel like she's piloting her own ship.

This season undeniably has plenty of twists and turns, and will likely cement Lenny as one of the most memorable female villains to date. "She's already died multiple times. She's been tortured. She's been fighting to survive," says Plaza. "She's had enough."