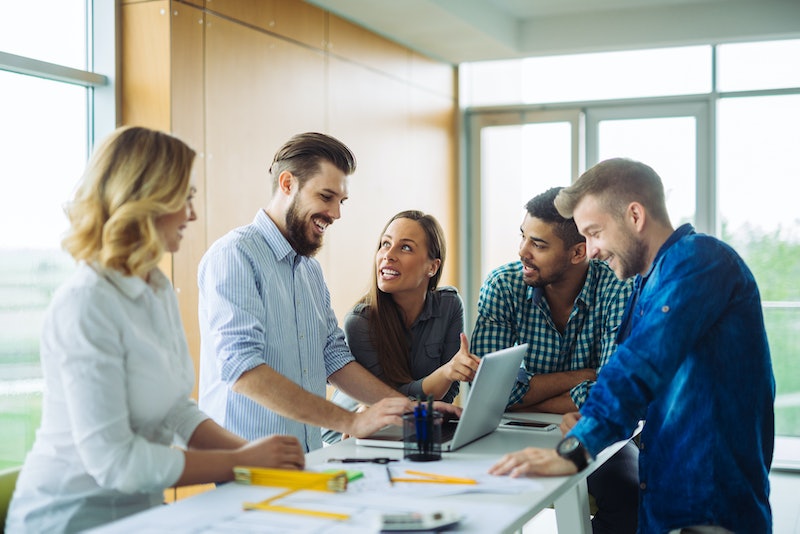 Some people are unduly bothered by filler words in conversation. These are the people who rage when they hear "literally" used figuratively, or call you a Valley Girl for saying "like" while talking. It seems like a tremendous waste of energy, especially because these verbal tics are just a sign that someone's making spontaneous conversation like, you know, a human being. But there is one small request I have when it comes to these small phrases we all unconsciously use: Let's stop asking, "Does that make sense?" every time we speak up in a meeting, or explain an idea we have, or ask for something we need, when the request is perfectly cogent, logical, and reasonable.

It's never the people who we actually need clarity from who ask other people if what they just said made sense. Rather, this comment usually tends to come from women in professional contexts who are unintentionally trying to soften an idea they've just presented. It's the same concept as adding 'lol' to a straightforward text so that the recipient doesn't misinterpret your tone and think you're mad at them. Full disclosure: A quick search of my Google chat history is a reminder that I'm guilty of cushioning almost every suggestion or concern with, "Does that make sense?" Ninety-nine percent of the time, what I said does, indeed, make sense. But asking it suggests that I'm not entirely sure of what I'm saying, and offers up the opportunity for whoever I'm talking to — usually, a male supervisor or coworker — to pick apart my perfectly articulate argument.

Remember the push to get women to stop apologizing during meetings? A 2015 article in The New York Times notes that men are notorious for talking over women and taking up space on the subway — and yet, we're the ones who are more likely to say sorry. Granted, I'm speaking from personal experience, and a quick Twitter search shows a fair amount of men questioning whether the matter-of-fact things they say make sense. If you're self-assured and confident in what you say, why are you asking whether it makes sense?

This isn't meant to tone police anyone who speaks up in a meeting, by the way, and, like most things, the issue isn't black-and-white. "I don't know if this makes sense" can let the person on the other side of the exchange know that you're open to feedback on your idea. The expression also serves a legitimate purpose when you truly aren't sure if the point you're trying to get across is being interpreted in the way it's intended. But often, it's like adding a hug-face emoji to a work email, or saying, "It could just be me, though!" after sharing your opinion; it depreciates the value of your opinion, which is actually, like, worth a lot.

Because, at the end of the day, we're responsible for all of our opinions, even the bad ones. I've written my fair share of terrible takes in the 15 years I've had Internet access, and it's hard to own up when you are wrong, or even when your well-meaning missive is misinterpreted. But when we doubt ourselves before we've even finished speaking, we shift blame unnecessarily. It's OK to give someone instructions or express a new idea without having to couch it in self-doubt. It's OK to ramble, to daydream, and to rant, and to be a little confusing sometimes.

As a writer, I value clarity and conciseness. I think we can all do a better job communicating our points. But it feels like we're not asking other people whether we sound rational — instead, we're giving them an out by subtly suggesting that we don't know what we're talking about from the get-go. And we do.

I don't actually expect anyone to change their speech patterns based off what I'm saying, but just like we started to think about "sorry" and all the other turns of phrase that subtly undermine our authority (in the office and out), let's start thinking about how, when, and why we're saying this. There's nothing wrong with striving to be well-learned and well-spoken, but give yourself some credit. If you're able to have level-headed conversations, own it.

Does that make sense?

More like this
What Is Brad Pitt’s Net Worth? The Bullet Train Star Now Makes 8 Figures Per Film
By Hugh McIntyre
Gemma Collins' Net Worth Is Only Going Up
By Catharina Cheung
What Is Beyoncé's Net Worth? The 'Renaissance' Hitmaker Makes 9 Figures On Tours
By Radhika Menon
Beyoncé & Madonna’s “Break My Soul” Remix Honors A Group Of Black Icons
By Stephanie Topacio Long
Get Even More From Bustle — Sign Up For The Newsletter