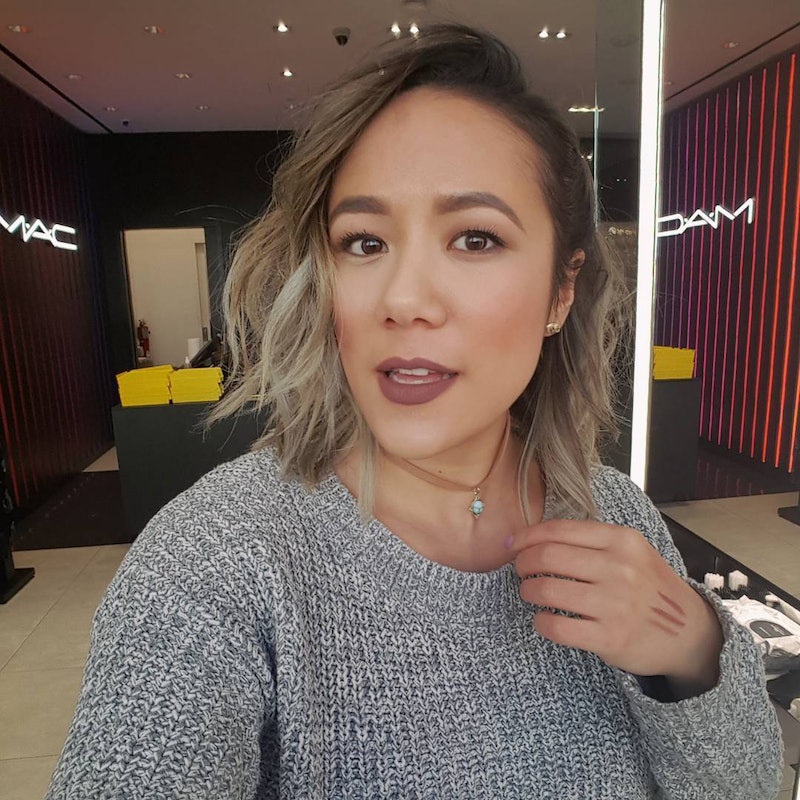 When I made my New Year's resolutions for 2017, I tried my best to come up with a tangible plan so I could manage them and keep track of my progress. For example, I wanted to increase my intake of water every day, so I resolved to drink eight glasses a day, which is easy to record. I either tally up the glasses in my daily planner, tick them off in my Fitbit app, or, if I'm in a bind, just take a magic marker and tack some lines on the back of my hand.

My other main resolution isn't so easy to track, though. I resolved to stop saying sorry this year, because I realized that I, like most women, apologize for everything — for the barista getting my drink wrong, for forgetting what I was about to say, for the tall person who elbowed me in the head as they walked by, etc. I'm not actually regretful or remorseful for these silly things. The truth is, I honestly just don't want to come off as a bitch, so I would rather say sorry than risk sounding too demanding.

So over the next month I made it my priority to nix sorry from my vocabulary whenever possible, because there's got to be a way this year to say what and I want and get what I want — without apologizing for everything along the way.

Yoga studios are chock-a-block full at this time of year. People are cashing in hard on their New Year's resolutions, so there was actually a line-up of people waiting to write their names on the sign-in sheet when I arrived for the hot vinyasa flow class. The person behind the front desk recognized me as I was waiting in line and said, "Hey, Gloria!" My name is not Gloria, although many acquaintances seem to make that mistake.

I could feel the apology bubbling up from my diaphragm ("Hey, sorry, but it's actually Gina"), but before it reached my tongue I swallowed.

"Good morning," I replied with a smile. "It's Gina, actually."

She felt terrible and apologized profusely, but I insisted it wasn't a big deal at all and we were still yogi buddies. OK. Crisis averted.

A study published in Psychological Science in 2010 showed that women have a lower threshold for what constitutes an apology than men have. I had a feeling my threshold was lower than most women's, because I apparently thought correcting my name was a good enough reason to offer an expression of regret. So I spent the rest of the week taking internal notes to figure out exactly where my threshold started.

Apparently, it's most common for me to want to apologize for the following: when I interrupt someone to ask for their help with something, when I correct someone, and when I needed another person to get something done. At least I now know what to look out for in the coming weeks.

Now that I knew what my apology weaknesses were, I felt like I was entering this week with more of a purpose. The very first day I had an appointment to touch up my hair color, and I knew I was stepping into familiar territory. I told myself I wasn't going to be sorry for asking my stylist for something a little bit different (more gray instead of blonde), no matter how "demanding" I thought it would sound. Do you think Michelle Obama apologizes when she tells designers what she wants to wear? No way.

My stylist is so nice, butter wouldn't melt in her mouth. So it wasn't a problem to tell her exactly I wanted, sans sorry, even if I did have to tell her I wanted something different than what she suggested.

A few days later, I had to send an email to one of my editors telling her that I wasn't available to take on any extra assignments over the next two days because I was feeling really overwhelmed with what I had on my plate, and I simply didn't want to put any unwanted stress on myself. I sat down in front of my computer, took a deep breath, and wrote a polite email to her explaining my situation. At the end of the message, rather than apologizing, I typed, "Hope that's ok!"

It was hard to send, because I was fighting off feelings of not living up to her (and my own) expectations, and I was worried I was letting her down. She promptly sent back an email that said, "No problem! Thanks for the update!"

There weren't any other big opportunities to test out my sorry experiment this week, but I'm hoping something in the next couple weeks will give me the chance to withhold apology when I'm in a difficult face-to-face conversation with someone, because that's really when I feel the sorries bubbling up.

I got deathly sick at the beginning of the week. Like, wrapped around the toilet for 24 hours sick. I had recently arrived to Mexico and, just like the rite of passage that happened when I first landed in Peru and Bolivia a few years ago, I ate something weird and puked my brains out for a day.

I currently live with two guys, and we made a pact to have a fun weekend together since we hadn't spent any quality time together in ages. So when I fell sick halfway through our weekend, I found myself apologizing profusely for being a joy-kill.

Those were the only words I could muster. In my defense, New Year's resolutions are the very last thing on your mind when you've got food poisoning, so I would really like to cut myself a break for this one. Of course, neither of the guys were upset at all about my sickness. In fact, they were nothing but helpful — they turned on Netflix for me, brought me soup, and made me toast when I could stomach food again.

I ruminated on this throughout the rest of the week. It occurred to me that, in general, the moments in which I'm most worried about being a nuisance to people are usually the times when my loved ones are most willing to help me out. It's silly to think that saying sorry is my first instinct, especially because if the roles had been reversed, I would never in a million years let my friend apologize for being sick.

Check back in on Friday, February 3 for another update!