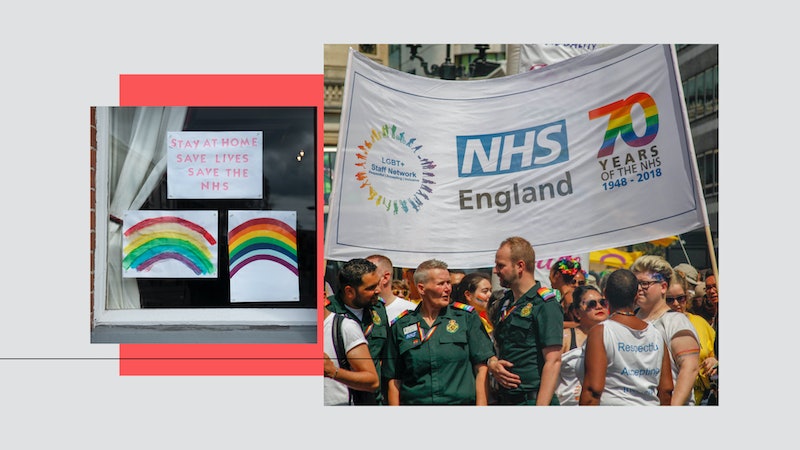 Shortly after the UK went into lockdown on March 23, rainbow posters started appearing in the windows of homes across the UK. Often drawn by children, they were intended to show support and appreciation for NHS workers who were not only dealing with an influx of coronavirus patients to hospitals, but shortages of essential PPE, which put their own health at even greater risk. According to the BBC, the NHS rainbow trend was started by a Birmingham nurse, who invited members of the public to send rainbow drawings into the temporary NHS Nightingale Hospital.

Since then, the symbol has become short-hand for support for the health service across the UK's four nations. NHS rainbows have been chalked on pavements, spotted at football stadiums and tennis courts, displayed on banners on Oxford Street as it reopened, and spray-painted onto playing fields. A host of merchandise has sprung up, with rainbow badges, mugs, tote bags, pizzas, and even inflatable sprinklers being sold in aid of NHS Charities Together. But, as many members of LGBTQ communities have pointed out over the past few months, however well-intentioned the displaying of NHS support posters and selling of charity items is, the rainbow symbol was already taken. The NHS rainbow and the Pride rainbow are slightly different, with the NHS rainbow consisting of five stripes and the traditional Pride flag having six (though there are growing calls to add more stripes to better include trans people and LGBTQ+ people of colour). But this hasn't stopped members of the public and companies accidentally – or deliberately – confusing the two.

Members of LGBTQ communities have expressed concern that the use of the rainbow to celebrate the NHS will undermine its meaning. As LGBT Foundation Pride co-lead Joe Nellist told the BBC, "There is genuine fear that its use as a symbol of hope for the NHS will lead to the disassociation of it as a symbol of LGBT equality." But how do those who are both members of LGBTQ communities and NHS workers or patients feel? We spoke to Dan, a junior doctor in Manchester, Dr Mike Farquhar who spear-headed the rainbow badge initiative at London's Evelina Hospital, and Sarah, an NHS user. Here's what they have to say.

"I’m never going to say that somebody using a rainbow symbol to support the NHS pisses me off — I don’t think anyone in the LGBTQ community would. I mean, most of my family are currently working on the frontline in hospitals battling coronavirus. The NHS holds a very special place in my heart. And, if you look at it from the beginning, it all started with kids counting the rainbows in windows. That was so sweet, and it turned into a show of solidarity for the NHS. I don’t have any problem with it on that level.

All these things that normally would have been used in Pride parades are suddenly being sold as something else.

The issue is that, before coronavirus happened, if you saw somebody hanging a rainbow flag outside their window or in their front garden, that was a way for us to see if somebody else was an ally. But I’ve seen young people share images of their grandparents putting rainbow flags out in their garden when they know for a fact that their grandparents are homophobic, for example. That’s what gives me anxiety: that a symbol of allyship can now mean one of two things and I don’t know which of those two it is.

What muddies the situation even further is that larger companies are actually openly selling things they would have sold for Pride this year as NHS flags. All these things that normally would have been used in Pride parades are suddenly being sold as something else. That’s when it feels like something has been taken from us.

With the rainbow NHS badge initiative, that was a way to make us feel like we could open up to our doctors and caretakers. Even though doctors take the Hippocratic Oath (which is supposed to ensure that they treat each patient equally), as we’re seeing in America right now — where they're trying to roll back healthcare protections for trans people — that won't always be the case. And the UK aren’t far behind on that front. It’s really big stuff and we’re all very worried about it. So as much as doctors can say that they are not affected by somebody’s lifestyle, people’s treatment is still massively affected by prejudice. If I walk into a doctor’s surgery for a sexual health appointment, for example, it takes a few questions before I feel comfortable enough to turn around and say 'Look, none of these questions apply to me because I’m gay.' People rarely begin consultations with 'What’s your sexual orientation?' and almost never ask 'What are your pronouns?' But those are massive things that can answer a lot of questions and stop a lot of embarrassment down the line. So if somebody treating you is wearing a rainbow badge, we now have to think, what do you mean by wearing that badge? Can I be open and honest with you or do I have to be careful?"

"I don’t really mind the use of the rainbow in support of the NHS. However, I associate it so strongly with Pride and the LGBT rights movement that it’s a bit weird seeing it in this context. I certainly don’t feel that LGBT people own the rainbow. The six original colours of the Pride flag each had separate meanings, and I wonder how many people could actually even name them — I can’t. Besides, more recently the flag has begun to evolve, to include colours for trans people and people of colour, making a flag distinct to the historical rainbow.

If a bus company wants to save a few pennies by slapping the NHS logo on a Pride bus, I think there are much bigger battles to be fought.

I know there were a few tweets by people who were offended at a bus company in Plymouth taking their Pride bus and slapping an NHS symbol on it. I found whole thing silly as it seemed we were debating which completely inconsequential branding of a bus was worse. If anything I’m outraged by the absolute lack of tangible improvement for anyone involved [either NHS staff of the LGBT community]. Not to mention the fact that Pride was consistently referred to as a ‘brand,’ which is a depressing reflection of its commercialisation and de-politicisation. What matters is not whether an organisation ‘brands’ itself in support of Pride, but whether their actions advance the rights and interests of LGBT people. Like the fact that the Home Office marches in the Pride Parade. I don't think there's any pride in deporting LGBT people back to countries where they're in danger just because they weren’t born here.

One of the more concerning things for me is that people read these articles and think ‘look how ridiculous these people are, getting annoyed at what colours are on a bus,’ and use this to delegitimise valid LGBT causes, like the ongoing attack on trans rights. If a bus company wants to rebrand and save a few pennies by slapping the NHS logo on a Pride bus, I think there are much bigger battles to be fought.

I'd probably have the same opinion even if I didn't work as a doctor. The NHS has got a long way to go still with LGBT rights, in particular trans rights and the treatment of trans patients and staff. In that respect, I identify more strongly as part of the LGBT community than with being an NHS worker. Because at times the NHS has not supported me. So if we're picking teams, that's where my affinity lies."

"Launched at Evelina London in October 2018, our rainbow NHS badges, uniting the strong visual symbols of the NHS logo and the Pride Flag, are intended to send a strong message of support to LGBT+ people and families that our hospital is an open and inclusive place, that we see them, that we understand their needs, and that we are here to listen and support them. Sadly we know many LGBT+ people still face challenges and unhealthy attitudes when accessing NHS healthcare across the UK. As a result LGBT+ people are at risk of poorer health outcomes compared to non-LGBT+ people. NHS staff who choose to sign up to the project and wear a badge commit to understanding the specific healthcare needs of LGBT+ people, the challenges they can face, and to accept the responsibility of being a part of the solution to make things better.

There’s more than enough room for rainbows and the Pride Flag to exist side by side, but it’s important to make the distinction between the two.

The rainbow has long been a positive symbol of hope, and it’s been brilliant to see it used to send messages of support to NHS staff during the pandemic, including some really creative rainbows from some of our patients and families here at Evelina London. During some very challenging times, the rainbows have helped put smiles on the faces of many NHS staff, reminding us storms eventually pass and better days will come again.

I think there’s more than enough room for rainbows and the Pride Flag to exist side by side, but I do think it’s important to make the distinction between the two.

The rainbow’s positive associations, as a natural image of beauty, hope and inclusivity, were one reason Gilbert Baker used it as a starting point when he designed the original Pride Flag in 1978, to create a new symbol for the LGBT+ community. His now iconic eventual design adapted the rainbow’s seven curves of colour into six bold stripes and, over the last 40 years, has become a rallying symbol universally recognised as being associated with the LGBT+ community, a symbol of strength, solidarity, protest, pride and safety, used both in celebration and defiance.

The Pride Flag means a lot to our community, so seeing the specific Pride Flag being branded as a 'thank you NHS' flag, without reference to LGBT+ people has got some people worried. That’s especially because 'rainbow washing,' where big companies drape themselves in the Pride Flag during Pride Month but without necessarily a meaningful commitment to LGBT+ rights or issues, has become an increasing problem. When symbols are used carelessly it can risk diluting what the symbol is meant to stand for.

It gives us the opportunity then - especially in Pride Month! – to remind and educate people that the Pride Flag isn’t just a pretty image, but a symbol of LGBT+ history, power and community. The rights it now represents have been hard fought for and, for many of our LGBT+ family, both within the UK and across the world, those rights are still not fully achieved. For our project, it lets us re-emphasise why something like our badges are needed in the first place, what they represent when worn by NHS staff, and what still needs to be done to continue to make things better for LGBT+ people in this country.

Rightly, where the Pride Flag has been appropriated in generic ways that has been called out and corrected. As a result, I think people without that personal connection to the Pride Flag perhaps understand a bit better why it means so much to us. Rainbows are always going to make me smile but, as a gay man, the Pride Flag reminds me that I am not alone, that I am part of an LGBT+ community that stretches across history and continents, and that together we will continue to make things better for us all. Happy Pride!"