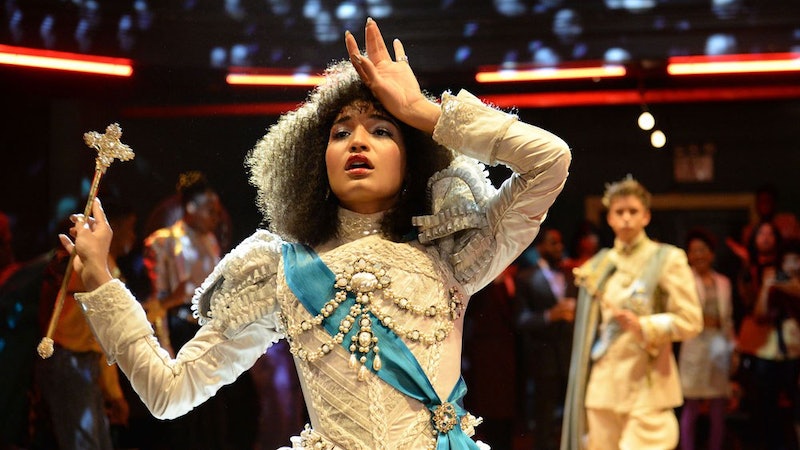 2018 hasn't always felt like the most uplifting year, but there are some bright spots. Among those is the recently released annual GLAAD “Where We Are on TV” report. This year, GLAAD's report shows that TV is casting more queer characters than ever before. According to the latest report, the 2018-2019 season will include a record-high percentage of LGBTQ characters on broadcast television. And for the first time ever in GLAAD's 23-year history of conducting this study, LGBTQ characters of color outnumbered white ones. It's a rare sign of progress, a bright spot in a report that can often be a depressing look at Hollywood's lack of diversity. But, there is still a lot of work to be done when it comes to LGBTQ inclusion on TV, and GLAAD is showing Hollywood the ways in which they could do better.

According to the report, The CW had the highest percentage of LGBTQ series regulars with 16 percent. The network's series Supergirl will make history by featuring TV's first transgender superhero, Nicole Maines as Nia Nal.

The 2018 "Where We Are On TV" report also shows that across broadcast, cable, and streaming, the number of bisexual+ characters (117, up from last year's 93), transgender characters (26, up from 17), and characters with HIV and AIDS (7, up from 2) is also up this year. FX even made history with Pose, which features the largest number of transgender series regulars on a scripted U.S. series, most of whom are trans characters of color.

Perhaps one of the most exciting findings of this year's study is that for the first time, LGBTQ people of color accounted for 50 percent of all LGBTQ characters on broadcast TV. Black representation went up to 22 perfect from last year's 18 percent, while Latinx representation held at 8 percent. Asian and Pacific Islander (API) representation also saw a small increase of one percent this year, getting to 8 percent.

Of the 28 LGBTQ regular and recurring characters listed as “Multiracial or Other Race” across all platforms, GLAAD found that 19 are multiracial, while eight are Middle Eastern, and one is First Nations.

While progress was made this year, GLAAD is upping the stakes for the 2019-2020 TV season. They don't want to just see more LGBTQ characters, they want to see more nuanced depictions of these characters to better reflect the community itself. For instance, GLAAD found that only 2.1 percent or 18 LGBTQ characters were people with disabilities, which is far below the national average of 13.3 percent reported in the 2017 American Community Survey conducted by the U.S. Census.

"GLAAD is calling on the industry to make sure that within the next two years, 10 percent of series regular characters on primetime scripted broadcast series are LGBTQ," Sarah Kate Ellis, GLAAD's president and CEO, wrote in the report. "This is an important next step towards ensuring that our entertainment reflects the world in which it is created."

What this year's report shows is that, while the numbers are improving, television is still far from representing the real world, but GLAAD will be there to make sure Hollywood gets there. Preferably, sooner rather than later.