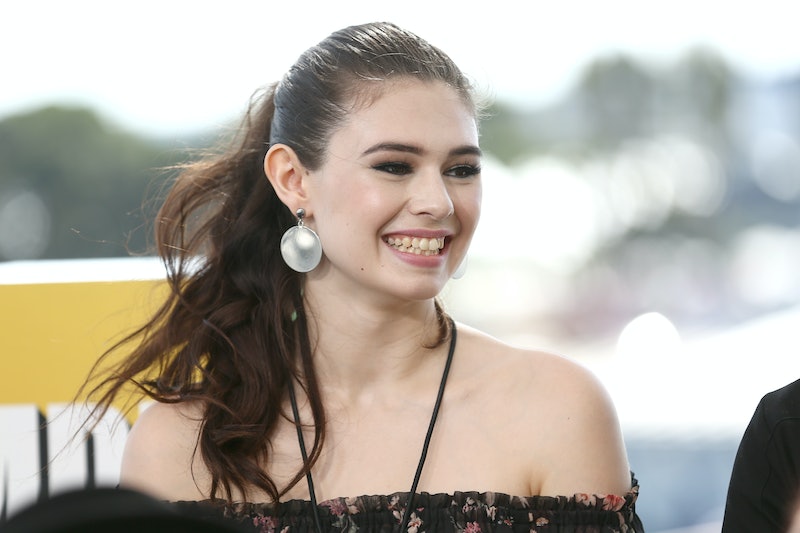 This year, history was made at the Supergirl San Diego Comic-Con panel on Saturday, when it was announced that Supergirl cast a transgender superhero for Season 4. Not only will this transgender superhero be the first on the series, but on television overall. This particular barrier will be broken down by transgender actor and activist Nicole Maines. Fans might recognize her from a previous appearance in the HBO documentary The Trans List, but this time around, she'll make history as series regular Nia Nal, aka Dreamer, who's described thusly in Supergirl's official character descriptions, provided by TVLine:

"Nia is the newest addition to the CatCo reporting team. A soulful young transgender woman with a fierce drive to protect others, Nia’s journey this season means fulfilling her destiny as the superhero Dreamer, much like Kara came into her own as Supergirl."

What's important to note here is that Nia's gender identity isn't just a label that's being slapped on her, but something that deeply informs her character. (Just like Kara's initial unwillingness to embrace her powers has informed her character arc.) Because of her own lived experiences, Nia has been endowed with an instinct to protect others, and that's part of her power. "She has this ferocious drive to protect people and to fight against discrimination and hatred," Maines shared with the audience at the July 21 panel, adding, "She’s the superhero we need right now."

If Dreamer is the superhero we need, then Maines is definitely the actor we need right now. For one thing, she's clearly thought hard about how best to represent the transgender community onscreen; during an interview about the project the 21-year-old told Variety, "It feels fitting to say with great power, comes great responsibility. I’m nervous because I want to do it right." And in this case, "doing it right" doesn't just mean acting well, it means expanding her audience's horizons about what exactly a trans character is capable of. (Read: anything and everything.) She continued:

She's referring to the trend of cisgender actors playing transgender characters, which is finally starting to come under some fire. After Scarlett Johansson was cast as trans massage parlor owner Dante Tex Gill in the upcoming film Rub & Tug, there was so much backlash that she ultimately backed out of the project. And while the role has yet to be recast, many are hopeful that it will be filled by a trans man.

Others have had trouble understanding the controversy at all, and Maines spoke directly to those critics in her interview with Variety. "I think we’re in a time right now where more than ever representation in the media matters," she noted. "And what we see on television has a very dramatic effect on our society." It has been proven time and time again that representation matters, so just having trans roles isn't enough. Those roles also deserve to be filled by those who can do so three-dimensionally, as Maines emphasized:

"I think that cis gender actors don’t take roles out of malice, it’s just a failure to realize the context of having cis gender people play transgender characters. We don’t see the same issue with sexuality, we see straight people play gay all the time. With trans folks we have a lot of people accusing us of just playing dress up for whatever reasons and that’s just not true. Having trans people play trans roles show that we are valid in our identities and we exist."

Hopefully, Maines' role on Supergirl will help dispel the belief that trans people are "playing dress up." And every trans story that gets told makes more space for the next one to be shared, so hopefully Maines won't have to carry the mantle of "first and only transgender superhero" for long.