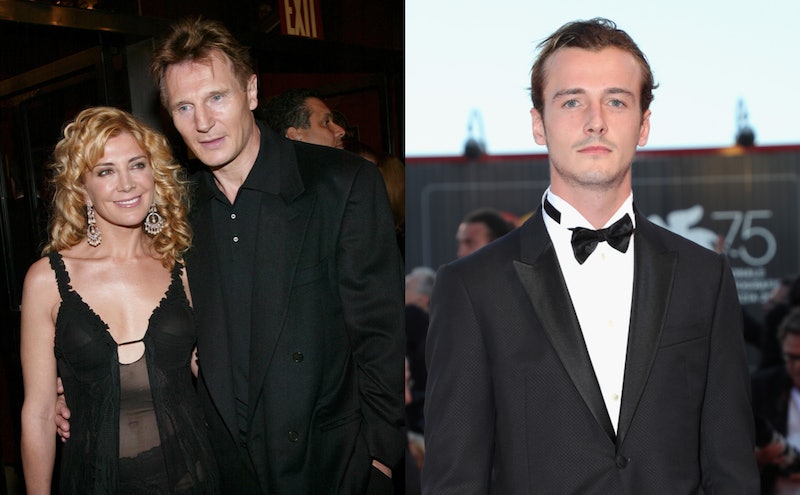 Almost 10 years after Natasha Richardson died following a skiing accident, one of her sons is honoring her memory in a special way. According to People, Micheál Neeson has changed his last name to Richardson to remember his mother. Now 23 years old, Micheál was 13 when Richardson's fatal accident happened at Mont Tremblant in Quebec, and it sounds like his decision has nothing to do with father Liam Neeson — it seems he simply wanted to pay tribute to his mom.

The Daily Mail also reported the news of Micheál's name change, speaking to Richardson's mother, Vanessa Redgrave, who said that his decision is now official.

"He’s taken, officially, the name of his mother. He’s Micheál Richardson, not Micheál Neeson," Redgrave said. "That wasn’t because he wanted to avoid his father’s fame, which is enormous. He wanted to hold his mother close to him — because she was a remarkable actress. Absolutely remarkable."

She also added that she approves of his choice, because his new name is "as good as any."

"Our quaint customs dictate we have to have a male name," Redgrave added while talking to The Daily Mail. "I don’t object. Why not? It’s as good as any."

The late Parent Trap star's 2009 death was shocking, especially since she was only 45 at the time. As People reported, Richardson was skiing on a beginner's slope with an instructor when she fell. She reportedly refused ambulances at first, but was later rushed to the hospital when her condition got worse. When Neeson made it to her bedside from where he was working in Toronto, she was brain dead, and later passed away after she was brought to New York so family and friends could say goodbye.

During a 2014 appearance on 60 Minutes, Neeson said U2 lead singer Bono played a big role in helping Micheál cope with the death of his mother, having been in a similar situation himself at his age. Neeson told host Anderson Cooper:

"You know, it could have been a hell of a lot worse. I'm name-dropping for a second. Bono is a pal, and he came 'round to have a dinner, and I remember he was sitting beside Micheál and, just out of the blue, he said, 'What age are you Micheál?' He said. Micheál said, 'Thirteen.' And Bono said, 'Yeah, that's the age I was when I lost my mum.' That was it. And it I could've kissed him for it! He was, like, saying, 'You know, I lost my mom at this age and I'm doing okay. And you will do okay, too.'"

It's hard to imagine what Neeson and his sons have gone through in the years that have passed since Richardson's death, but even though she's gone, it's clear that they haven't forgotten her. Micheál's name change is a sweet gesture that will surely help keep his mom's memory alive, and it seems like fans of the beloved actor will do the same by continuing to watch her movies.