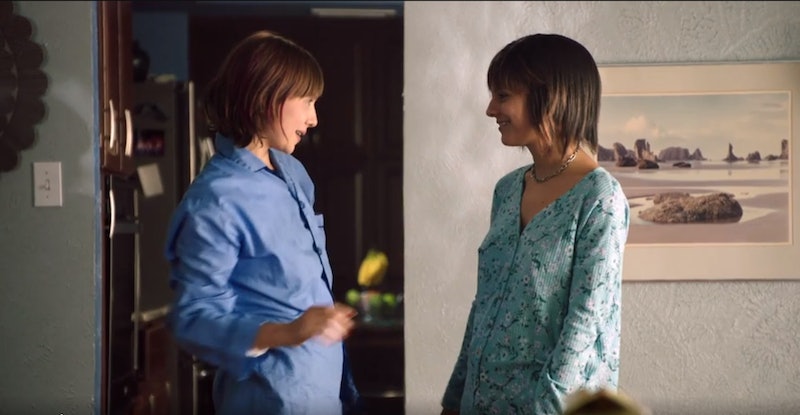 In Kindred Spirits, Sadie (Caitlin Stacey) moves back in with her big sister Chloe (Thora Birch) and Chloe's 17-year-old daughter Nicole (Sasha Frolova). It seems to be a happy family reunion at first, until it quickly becomes clear that Sadie is a "deeply disturbed young woman with a sinister agenda." Thankfully, Kindred Spirits is completely fictional, but that doesn't mean it's not extremely creepy.

Written by Chris Sivertson (All Cheerleaders Must Die) and directed by Lucky McKee (May, The Woman), Kindred Spirits is a female-centric thriller that takes a popular trope — Single White Female-ing another woman out of jealousy — to the extreme. Neither the trailer nor the official synopsis for Kindred Spirits tells us much about Sadie's past. Instead, all we see is her donning a ridiculous wig to impersonate her niece and violently swinging a shovel, presumably over someone's head, though the clip is intentionally too dark to make out exactly who is on the receiving end.

Chloe does inform her daughter that her Aunt Sadie has always been "a little immature," a voiceover that appears over a clip of Sadie playing with a doll house. It's a sentiment that's echoed in the other brief glimpses we see of Sadie hanging out at a masquerade party with Nicole and even declaring, "Twins!" when she notices they have the same hairstyle. That seems to aid Sadie a fair bit when she tricks a younger boy, presumably a friend or even a boyfriend of Nicole's, into believing that she's actually her niece.

Exactly why Sadie wants to impersonate Nicole isn't really explained, nor is the fact that Sadie somehow manages to convince people who probably know Nicole pretty well that she's Nicole. One of Nicole's friends does mention with not a small amount of distaste that she "never realized how much you guys look like each other," but surely not so alike that people can't tell them apart.

Part of Sadie's fixation on Nicole is based on jealousy, since Chloe, as a single mom, likely has a close relationship with her daughter and Sadie views this as a threat to her own relationship with her sister. The Kindred Spirits trailer seems to imply that Sadie will stop at nothing to ensure nothing comes between herself and Chloe, even potentially resorting to murder, or at least extreme violence.

Of course, this doesn't explain the whole impersonation aspect of the storyline. If Sadie views Nicole as a threat, wouldn't she just get rid of her? Or, is getting rid of Nicole only part of her plan, the other part being an attempt to take over Nicole's life and enjoy not only a close relationship with Chloe again but also the teen's popularity and youth? Kindred Spirit probably won't make much logical sense, but it should creep audiences out just in time for Halloween.