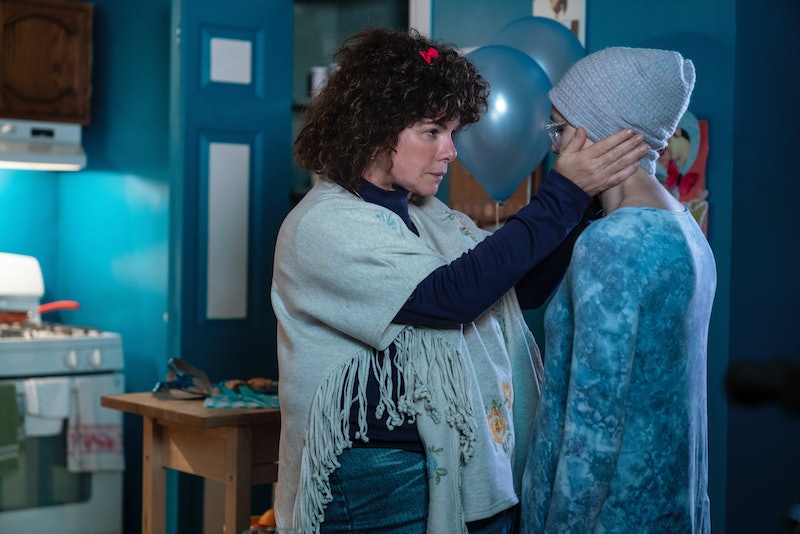 This article contains details about physical and mental abuse, which some may find triggering. This Saturday, Lifetime debuts its latest TV movie which documents the facts behind a brutal murder. Love You to Death is based on a true story about a mother and daughter with a disturbing and tragic ending. Love You to Death dramatizes the story of Gypsy Blanchard who, according to Springfield News-Leader, devised a plan with her boyfriend to kill her mother DeeDee Blanchard after years of psychological and abuse.

The network’s synopsis details their take on the incident with Oscar winner Marcia Gay Harden starring as Camile, the seemingly perfect caretaker for her wheelchair-bound daughter Esme (Emily Skeggs), who sufferers from a host of ailments. Camile is found stabbed to death in her home and Esme is no where to be found, which leads their tight-knit community to believe she has been kidnapped by the killer.

In reality, Esme planned the murder with her boyfriend and has skipped town. She’s later to be found perfectly healthy with the exception of being a victim of Munchausen Syndrome by Proxy which means she was forced to believe she was sick by her mother, per WebMD. The layers start to unfold and reveal that Camile was a controlling, abusive parent who actually had a negative relationship with Esme.

Lifetime released a shocking Love You to Death trailer, which shows Camile getting praised for being a wonderful mom in public while living a darker life at home. She’s seen smacking Esme, binding her to a wheelchair, and insisting that her daughter is very sick despite Esme moving her legs. A doctor suspects that Esme has been misdiagnosed and the girl is later seen asking her boyfriend to save her from her mother. Esme accuses Camile of using her for attention and the clip ends with a bloody hand to signify the latter’s death. A disturbing version of “Tainted Love” plays throughout the trailer as things quickly escalate in this ill-fated relationship.

In real life, DeeDee and 14-year-old Gypsy relocated to Springfield, Missouri from Louisiana after Hurricane Katrina, per ABC News. DeeDee had been at odds with Gypsy's father and grandparents over the multiple diagnoses that she claimed her daughter had, including epilepsy, leukemia, muscular dystrophy, hearing impairments, and a learning disability while using a wheelchair and a permanent feeding tube, which led them to become estranged. They quickly became well-known in the community as an inseparable duo and gained some benefits from their story, including TV appearances, monetary support from charity groups, and trips to Disney World.

The report continues to detail Gypsy's story, including a turning point in 2013 when she met her boyfriend Nick Godejohn on a dating website. She confided in him about her mother's abuse and her health status as they began a secret relationship that wasn't discovered by DeeDee until early 2015. She forbade Gypsy to continue seeing Nick, so the lovers devised a plan to kill her in June. She gave him blue gloves and a knife before going to hide in the bathroom while he stabbed her mother to death. They fled to his parents’ Wisconsin home but were quickly apprehended after posting about the crime on DeeDee and Gypsy’s joint Facebook page a couple of days after the murder.

Per People Magazine, Gypsy pleaded guilty to second-degree murder in July 2015 and is currently serving a 10-year prison sentence. The article also states that experts believe she was indeed a victim of Muchausen by proxy. Gypsy told People that her mother was “very protective” and her only friend outside of her stuffed animals until she started to get older. According to her, DeeDee started becoming more controlling and started using physical abuse that included chaining her to a bed, withholding food, and hitting her with a coat hanger. She also admits that she never thought about exposing her mother by standing up out of her wheelchair in public because she was afraid.

She also admitted to Dr. Phil that she didn't know what medications her mother could have put in the feeding tube and said she was forbidden to speak at her doctor's appointments. Gypsy also said her mother told her that she was mentally incompetent and would frequently switch doctors if they didn't tell her what she wanted to hear.

Meanwhile, Godejohn was found guilty of first-degree murder and faces a life sentence without the possibility of parole according to a separate Springfield News-Leader report. He will be formally sentenced in February 2019.

Lifetime's dramatization is bringing this story back into the spotlight after the 2017 documentary Mommy Dead and Dearest, but hopefully everyone involved in this real-life tragedy can keep moving forward. Watch Love You to Death on Jan. 26 at 8 p.m. ET.