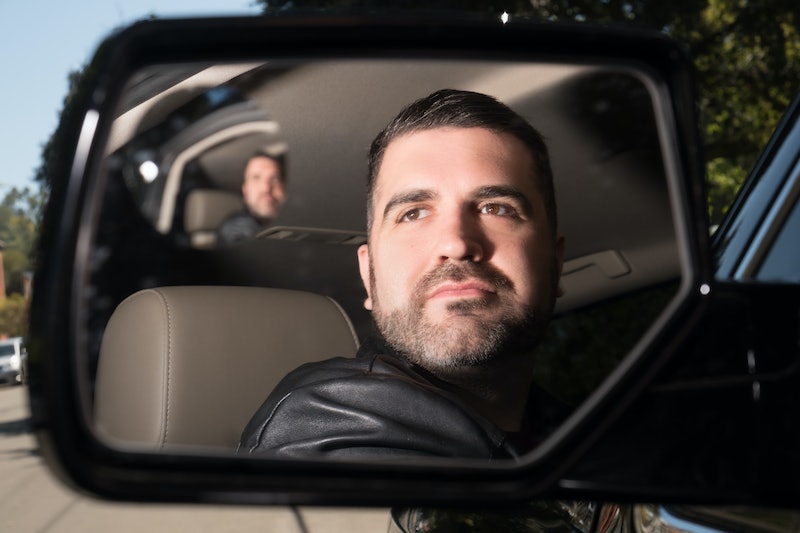 To be honest, I'm a little superstitious. I knock on wood if I say something I don't want to jinx, I read my horoscope most mornings, and I've ventured up multiple flights of stairs in tiny NYC buildings with friends after seeing a $10 palm reading sign propped up on a side street near Times Square. So when the opportunity came to get a reading from Thomas John, the titular psychic and medium in Lifetime's new series Seatbelt Psychic, I absolutely took it.

If you're already feeling suspicious, John wouldn't be phased; in fact, he welcomes that mindset. "I think it is good to go into any experience like this as a skeptic," he tells me during our recent interview in the Bustle office, promoting his show that premieres on Wednesday, July 11 at 10 p.m. EST on Lifetime. "I even said recently in an interview, we definitely welcome skeptics. We had many skeptics in the car."

On the show, passengers think they're getting into an ordinary ride-share service, à la Uber or Lyft, only to find out they can get a reading from John instead. I wasn't in a car, though. I was sitting in a brightly lit conference room, next to my coworker Olivia, who was listening as John began to rattle off details about her relatives. I accidentally spaced out a bit... until a question snapped me back into focus: "Does somebody have a name that's like Dorene? Dorothy? Do you have a Dorothy?"

It took me a minute to realize John was actually talking to me. "Oh yeah," I blurted, "That's my grandma's name."

From there, John shared messages from my late grandmother, who passed away my junior year of high school, that honestly only close family members would know. I won't dive into specifics, but it's not anything you could pull up in a Google search or perusal of Ancestry.com. And when he mentioned, "She's talking about your relationship with your dad, she's really happy that you guys are close... It feels like you guys have a good connection," I even got a little teary-eyed. Sure, that may seem generic, but it also sounds exactly like something my grandmother would've said and it wasn't always necessarily true. (I had a bit of a bratty phase in high school — sorry, Dad.)

After that, my grandma apparently showed John a broken heart, signifying a recent breakup and feeling unresolved in that regard. (Full disclosure: I, uh, tweeted about this particular split nearly six months ago, but I highly doubt John spent the 12+ hours pre-interview scrolling through hundreds of my old tweets to find it.) Regardless, the words shared on my grandma's behalf gave me an unexpected sense of closure I hadn't yet found elsewhere, emphasizing it wasn't my fault.

"This is a pattern for him," John told me, referencing my ex, who I eventually learned cheated on me with not just one other woman, but two. "So I feel like maybe he does this in other relationships, or he'll do it again. It's not like a one-time thing, I think it's more of a character trait." Suffice to say, I was shook. Especially since he added, "I feel like maybe it's possible you don't know the whole story. Like maybe you know part of it, but there's a lot more to it."

Not only did John give messages from my late grandma, but he also shared insight about the one who's still alive and happens to be one of my favorite people. On behalf of my mom's dad, who passed away decades ago, John said of my maternal grandmother, "He's telling me that this is somebody who's very special to you. And he feels like by [staying close with her], you're kind of honoring him." He later threw in, "I feel like she's a full-of-life type of person. It's good that you're close to her, because I feel like she's an important energy to you." Again, true.

Interestingly enough, the story about how John discovered his abilities also involves grandparents. When he was around 4 years old, he interacted with a late relative. He recalls, "My grandfather visited me and he was able to give me messages to share with my family. Then it kind of developed from there."

And he really did develop those skills. Beyond his upcoming TV show, John's client list has included names ranging from Jennifer Lopez, to Sam Smith, to Janet Jackson. Yet John tells me, that doesn't phase him — he values the work he does with any client, famous or not. "Sometimes there's situations where I do know who they are, sometimes I don't. I don't really pay attention to that so much," he says.

On his TV series, which is basically Carpool Karaoke meets Cash Cab meets Long Island Medium, John encounters his share of skeptics, but again, it doesn't bother him. "People like to test you and stuff like that. And of course, I can't on demand pull things. But sometimes there were things where people were like, 'Well, I'll believe in this if my dad can tell me his nickname for me.' And when their dad said it, they're like, 'Oh sh*t, now I have to kind of reevaluate here.'"

Speaking of reevaluating... on top of digging up the past, John's reading also gave me something to look forward to. "There's a new person coming in," he said of my love life. He then spilled details about my supposed future suitor: "I feel like this person is very tall, and you don't know him yet, but he likes to cook." Not only that, but he gave me a specific moniker to keep an ear out for. "For some reason, I am hearing the name Joe, Joseph... It could be maybe connected to this new relationship. I just feel like I want to give you that name."

While I probably won't hold my breath waiting for Extra-Tall Joseph to magically appear, there was additional peace of mind that John gave me. Speaking of my mom's mom, he said, "I want to tell you that her energy is really strong. And she'll be here when you get married." Since I don't foresee that happening anytime soon, it's a comforting thought. Now excuse me while I go knock on wood.