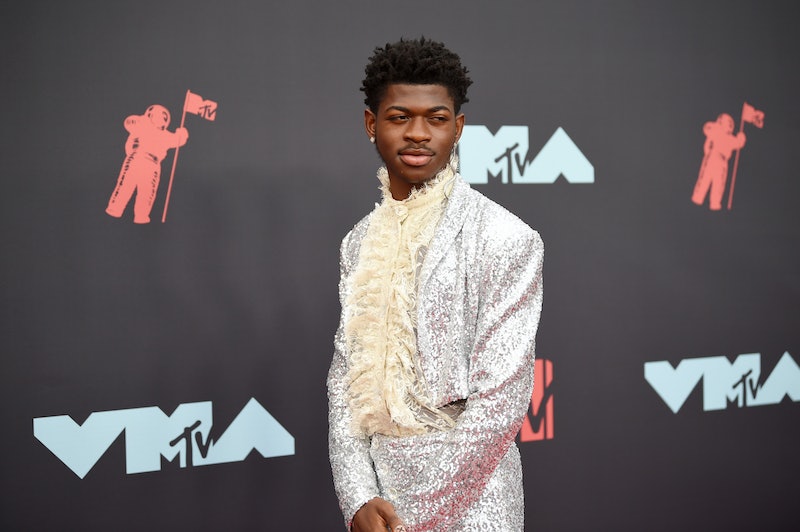 At the MTV Video Music Awards last year, no one knew the name Lil Nas X. This year, after one viral hit that stayed at number one on the Billboard charts for an unbelievable 19 weeks, people can't stop talking about him. Lil Nas X has been the most unpredictable breakout star of 2019, and he's taking on the music industry in style. Lil Nas X's 2019 VMAs outfit is definite proof of the fashionable takeover that no one could have imagined just a year ago. A 20-year-old gay country rapper smashing all-time music records with Billy Ray Cyrus as a sidekick? What was previously unfathomable is now gorgeous reality, all thanks to Lil Nas X.

Lil Nas X is known for having eccentric red carpet style that mixes hip-hop and country influences, much like his smash hit "Old Town Road." But at the 2019 VMAs, Lil Nas X switched things up a bit with an unconventional suit that channeled a different era. Wearing a silver sequin suit with a frilled lace shirt, Lil Nas X was all about those disco Beethovan vibes at the VMAs — which is definitely a vibe he just created with this look alone. And you can bank on the fact that he wore silver Pskaufman cowboy boots to stick to his "Old Town Road" roots. Just take a look at this flashy suit-and-shirt combo for yourself.

Lil Nas X certainly didn't skimp on the accessories to go along with the sequin suit. Along with a long silver snake earring dangling from one ear, the rapper went all out with several rings decorating his fingers. From a rainbow gem band to a silver horseshoe ring, Lil Nas knows how to jazz up an already jazzy look with accessories.

All that bling certainly brought attention to his hands — and his fitting manicure in honor of, well, himself. Lil Nas X had his own name spelled out in black across his nails with added gems on strategic fingers, adding some mani style to an already incredible look.

Let's be honest, we all stan a man with a badass mani who stans himself. Get it, Lil Nas X.

For his performance of "Panini" at the award show, Lil Nas X wore a metallic white Power Rangers, robot-like suit with chest plates, knee pads, and black accents. The outfit accented a futuristic performance of the artist's second single.

To accept the award for Song of the Year later in the night, Lil Nas X wore a standard outfit for the rapper — a gawdy red cowboy-inspired outfit. The third outfit change for the rapper came complete with a red cowboy hat to complete the monochrome look.

Lil Nas X is up for a whopping eight awards at the 2019 VMAs, only second to Billie Eilish who gained a staggering nine nominations. Lil Nas X's "Old Town Road (Remix)" featuring Billy Ray Cyrus is nominated for Song of the Year (and won for this one), Best Collaboration, and Best Hip-Hop Song. The video for the track is nominated for Video of the Year, Best Direction, Best Editing, and Best Art Direction. And last, but not at all least, Lil Nas X is nominated for Best New Artist. That's more than incredible for a man who was unknown and unsigned before independently releasing "Old Town Road" on Soundcloud in December 2018.

Lil Nas X is a favorite to win tonight, thanks to his viral success. But even without a moon person in his hand, he certainly won over fashion lovers with his signature campy style on the VMAs red carpet.

More like this
Dua Lipa’s Best Looks From Her ‘Future Nostalgia’ Tour
By Dominique Norman
Dan Levy Gave Loungewear New Meaning In His Hilarious IG Runway Show
By Brad Witter
At 28, Vera Wang Worked At Vogue & Partied At Studio 54
By Allie Fasanella
Camila Cabello's Y2K-Chic 'Fit Serves Major Underboob
By Meguire Hennes
Get Even More From Bustle — Sign Up For The Newsletter