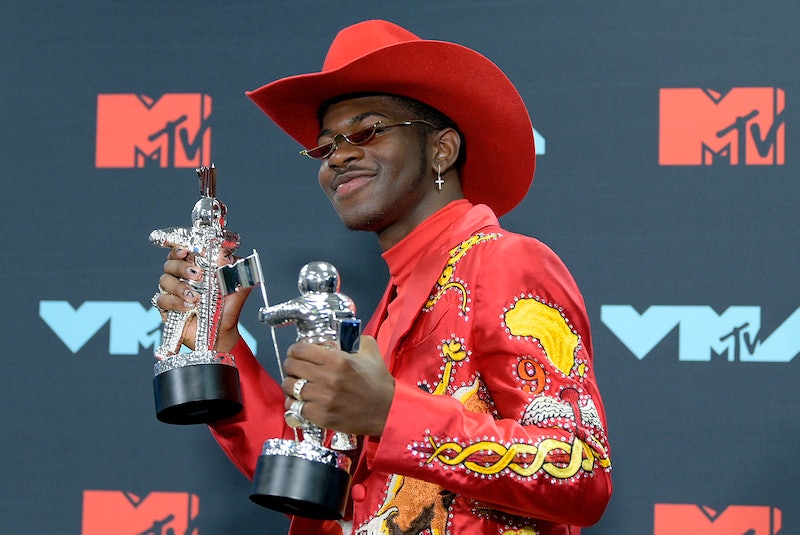 Thanks to the dominance of "Old Town Road" on the charts, Lil Nas X is on top of the world right now. And in a new interview for HBO's The Shop, the relatable rapper shared why he chose this time in his career to share a significant fact about himself. Lil Nas X detailed why he came out during such a high point in his career by offering up an important explanation for the personal moment.

During a roundtable discussion on the HBO series in an episode that aired on Sept. 3, the co-creator of the show, Paul Rivera, addressed Lil Nas X by saying, "With all that early success, you felt that it was important to make an announcement recently." When others during the discussion, including Kevin Hart, jumped to say "so what?" about the rapper being gay and deciding to share that with fans, Rivera went on to ask, "Why did you feel it was necessary to come out and say that?" Lil Nas X responded to the question firstly by saying that it was not easy growing up within an environment that wasn't overly accepting of LGBTQ+ individuals, "It's not that it's being forced, it's that growing up, I'm growing up to hate this sh*t."

Hart (who stepped down as the 2019 Oscars host after his past anti-gay remarks resurfaced, which he has since apologized for) wanted him to clarify, by asking, "Hate what?" Since the answer was pretty apparent based on the course of the conversation, Lil Nas X responded by saying simply, "Homosexuality, gay people."

Hart once again prompted, "Why?" The rapper tried to explain further, as the Jumanji star didn't quite seem to grasp the point he was making, "Come on now, if you're really from the hood you know it's not some..." Someone off-screen helped Lil Nas X finish the sentiment by offering up that there's "stigma" attached to the label, particularly within the black community.

Lil Nas X went on to explain that he felt as though it was the right time to come out because of the fact that he was at a high in his career. He said,

"For me, the cool dude with the song on top of everything to say this, any other time, I'm doing this for attention, in my eyes. But, if you're doing this while you're at the top, you know it's like for real and showing that it doesn't really matter, I guess."

Back in June, the rapper — who became well-known for his Billboard charting hit, "Old Town Road" — came out as gay, per Pitchfork. On June 30, the last day of Pride Month, he took to Twitter to share a personal message with his fans. He pointed out that people should take notice of the lyrics in his track "C7osure," which begins with, "True say, I want and I need to let go, use my time to be free.” He goes on to sing,

“Ain’t no more actin’, man that forecast say I should just let me grow / No more red light for me baby, only green, I gotta go / Pack my past up in the back, oh, let my future take ahold / This is what I gotta do, can’t be regrettin’ when I’m old.”

Ever since he came out, Lil Nas X has been open about why he chose to share such a meaningful, personal note with his fans, especially during a period when he has shot to fame. Additionally, he's been open about some of the unfortunate backlash he's received as a result of doing so. But, throughout it all, and as he explained in his interview on The Shop, the rapper has maintained that he came out at the right time, which, in the end, is really all that matters.