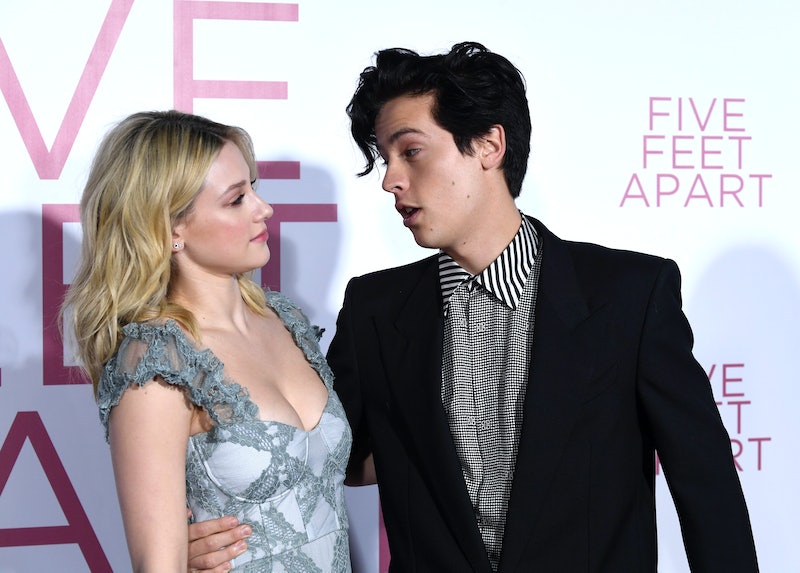 Bughead stans have been in mourning over the last few days, as there have been several reports suggesting that one of Riverdale's on and off-screen couples had decided to end their real-life relationship. Then, a recently published interview with the pair seemingly confirmed that news. Now, though, Lili Reinhart has responded to breakup rumors about her and Cole Sprouse, and it's safe to say that she definitely didn't mince any words.

So, Reinhart and Sprouse spoke to W Magazine back in May for the outlet's latest cover story, which was published on July 25. The piece made a point of calling attention to a few things that basically served to foreshadow their split in retrospect, such as the fact that they asked to be interviewed separately.

Hours after the story came out, Reinhart shared a photo of the cover on her Instagram page, and she did not seem thrilled. "BREAKING: A reliable source has confirmed that none of you know sh*t," she wrote in the caption. (Bustle reached out to Reinhart's rep for context on her post, but did not receive an immediate response. Bustle previously reached out to both actors' reps about the split reports.)

So, Reinhart's response made it pretty clear that she's not a big fan of speculative stories about her relationship. Totally understandable and fair enough. What's not clear about her response, however, is whether or not it's implying the breakup rumors aren't true. Like, is she just upset that the article included assumptions? Or is she upset that the article flat-out confirmed their split when that's not actually the case? Or was she not even specifically calling out W, but instead, other publications who have cited sources that claimed to confirm the breakup?

The whole thing was made even more confusing by the fact that W Magazine's Instagram account commented on Reinhart's post. No, they didn't try to clarify the situation. They simply commented with three heart emojis.

Then — yes, there's more — Sprouse shared the same pic of W on his Instagram page. The caption? "UNPRECEDENTED: Cole Sprouse and Lili Reinhart consume the flesh of 'reliable sources' to fuel their bacchanalian sex cult," he wrote. OK, that's pretty funny. It *still* didn't clarify if they've actually split, though. (Bustle reached out to Sprouse's rep for further comment as well.)

Look, at the end of the day, Reinhart and Sprouse's relationship status is nobody's business but their own. They don't have to tell their fans anything one way or another, and people shouldn't really expect them to — they've been intensely private all along.

The whole thing just feels unnecessarily perplexing, though, you know? Reinhart and Sprouse's comments come off as irritated, but also purposefully vague. On the other hand, W's article appeared to confirm that the stars broke up — without mentioning getting confirmation from "reliable sources" *or* from the stars themselves.

Regardless, we'll just have to wait and see if and how the outlet chooses to respond to all of this ruckus. Sprouse and Reinhart have said their pieces about it, though, so let's just let them live their lives in peace now.