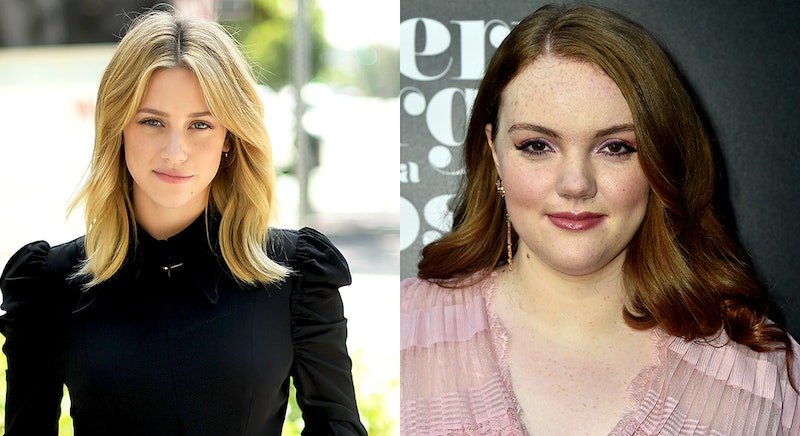 OK, so Jughead and Ethel kissed. What's the big deal? Unfortunately, not all Riverdale fans were quite so cavalier about last week's unexpected smooch. That's fine, except that some reportedly chose to voice their upset by way of harassing Shannon Purser (who plays Ethel) online. Luckily, Lili Reinhart and Shannon Purser's response to Riverdale trolls should, more or less, put those nonsensical haters in their place.

Re-tweeting a post from the fan account @CWRiverdaleNews Tuesday morning, Oct. 30 — which rightfully defended Purser and reprimanded those gnarly trolls — Reinhart penned an additional message of her own:

"Adding to that. Shannon is my friend, and it is embarrassing that people felt the need to attack her personally for something that happened on a SHOW. Written by WRITERS."

Continuing, Reinhart couldn't have been clearer about where she personally stands on the whole Jughead-Ethel situation, and how she feels about Riverdale audiences who've taken to hating on Purser as a twisted sign of allegiance to Reinhart's character, Betty (and her on-again, off-again romance with Jughead). Finishing the tweet, she wrote, "You are not a fan of mine if you treat my friend like this." Everybody got that?

Reinhart's response to her cast mate's internet trolls mostly served to expand on similar sentiments expressed in the Riverdale fan account's original post. Earlier Tuesday morning, @CWRiverdaleNews retweeted a story from Teen Vogue, published a little less than a week ago, right after the Riverdale trolling first picked up. Teen Vogue's story essentially chronicled Purser's initial response to the social media trolls, and it seems the fan account just recently caught wind of it. So, in a conceivable effort to stamp out the madness once and for all, the account took to Twitter with an FYI. Alongside a link to Teen Vogue's story, the account tweeted,

"Your daily reminder that bullying a cast member over a FICTIONAL ship is never ok. Please get a grip on reality."

That might sound a little harsh out of context, but after last week's trolling incidents, perhaps it's necessary to reiterate: Coming after an actor, just because you've got an issue with their fictional character's fictional behavior, really doesn't make sense. Plus, it should go without saying that harassing anyone online, under basically any circumstance, is hurtful, unnecessary, and often pretty dangerous, too.

As Teen Vogue mentioned in its Oct. 26 report, the trolling started last week, following Wednesday's new Riverdale episode. Those who watched it know the episode didn't come without its share of surprises — isn't that kind of the point? — the most jarring of which seemed to be Jughead and Ethel's first kiss. From an audience's perspective, the smooch did sort of come out of nowhere, so the fact that some viewers were a little caught off guard seems fair. But, as several outlets reported, there were others who took their upset over the Jughead-Ethel pairing way too far.

According to an Oct. 25 report from PopBuzz, Purser called out Riverdale trolls (who'd apparently been virtually body-shaming her via the social media platform ever since Jughead and Ethel's onscreen kiss) in a two-part string of tweets that have since been deleted from the social media platform. Alongside a snapshot of the out-of-breath Spongebob meme, Purser's first now-deleted tweet read, according to PopBuzz,

Purser definitely shouldn't have had to deal with the Riverdale trolls, or their hatefulness, in the first place. That said, the fact that she did manage to craft an extremely on-point, clever comeback for the ages is a truth that's pretty hard to argue with. Continuing, the actor reportedly said she's "not stressed" about what the trolls think of her, though she does "wonder what these people will think in like 10 yrs when they remember their twitter and realize they insulted an attacked real human beings for their character on a tv show..."

Valid question, that's for sure. Perhaps those Riverdale trolls should seriously consider what both Purser and Reinhart said in their respective tweets, and hopefully stop misdirecting their upset over Ethel to the actor who plays her on TV.