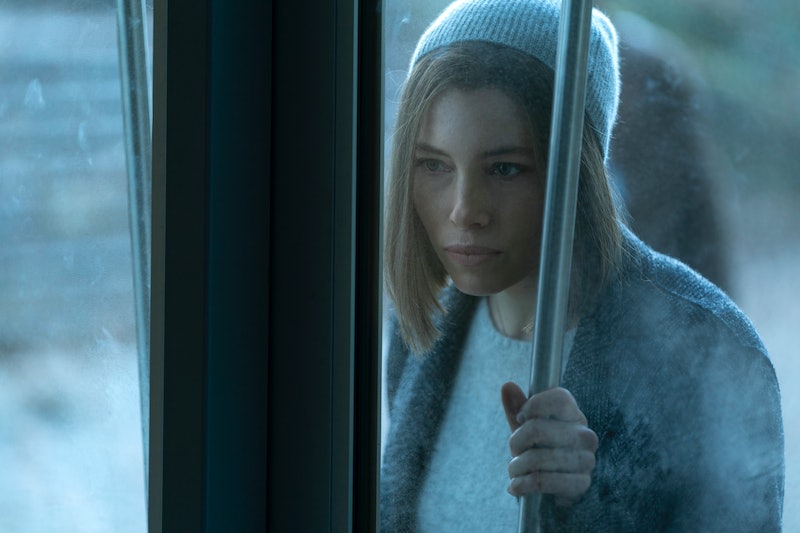 A town that just disappears overnight and a journalist driven to uncover why. This is the set-up for Limetown, a podcast turned TV show set to premiere on Facebook's streaming service, Facebook Watch. For those used to the set-up and high production value of This American Life and Serial, the Limetown podcast might at first sound like a true story. It's entirely a work of fiction though, and Limetown is not a real place. Limetown is inspired by strange and mysterious cities centered around technology, though.

For those unfamiliar with the 2015 podcast, Limetown was created by Zack Akers and Skip Bronkie, friends from their NYU film days. Their story centers on Lia Haddock — Jessica Biel in the adaptation — an American Public Radio journalist trying to unravel the mystery behind the ghost town of Limetown, Tennessee.

Originally home to over 300 people, mostly scientists and researchers, Limetown was built around a neuroscience research facility. One night, a frantic 911 call brings police and first responders to Limetown's gates, but security refuses to let them in. Three days later, the gates finally open, and every single person is missing. The only evidence that anybody even lived there is a single pyre in the middle of town, which contains the remains of one of the researchers.

It's a compelling mystery, but one that Akers said has no basis in a real occurrence. “I don’t know where it came from,” Akers admitted to The Wall Street Journal. “One day I just called Skip and I said: a town disappeared. He said, why? And I said, I don’t know, we’ll figure it out.”

Akers told Tennessee's Knoxville News Sentinel that despite being a Tennessee native, the story wasn't even originally set there. He wanted the story to feature large limestone cave systems, and was set on South Dakota until Bronkie convinced him to change it to Tennessee. Only after the story's conception did Akers realize Limetown was similar to Oak Ridge, Tennessee.

"I wish that it had a cooler origin story, so I could say 'Oh it's inspired by Oak Ridge.' And ... maybe subliminally it was, but it wasn't a conscious thing," Akers said.

In the 1940s, Oak Ridge was the home to the Manhattan Project, the secret World War II project that created the atomic bomb. Like Limetown, Oak Ridge housed all the workers and their families, and the entire town was fenced off and stationed with armed guards. Everyone living there was sworn to secrecy, and, as The Atlantic puts it, most were unaware of what they were even working on until the bombs were dropped on Japan. Unlike Limetown though, nothing tragic happened to the citizens of Oak Ridge, and it's a city you can visit today.

Oak Ridge isn't the only reference that the creators have brought up in connection to Limetown. In Interview Magazine, Akers and Bronkie said they drew inspiration for Limetown from two very different sources. Akers saw Limetown as a kind of fictional Fordlandia, which was a real life project Henry Ford started to build a city in the Amazon. "It was a complete failure, but it was an interesting concept to me: 'we’re going to build a utopia in the middle of the jungle,' and then the jungle won," explained Akers.

Bronkie, meanwhile, saw Limetown as a sort of dystopian Silicon Valley experiment. "You go to the Facebook campus and you have a dessert shop, you have restaurants, you have a barber. It’s incredible, but it feels odd to know that your whole life could be there," explained Bronkie.

Ultimately the basis for Limetown can be whatever the viewer wants to believe it is. It doesn't change the central mystery of the story, nor of Lia's determination to find out what really went down there.