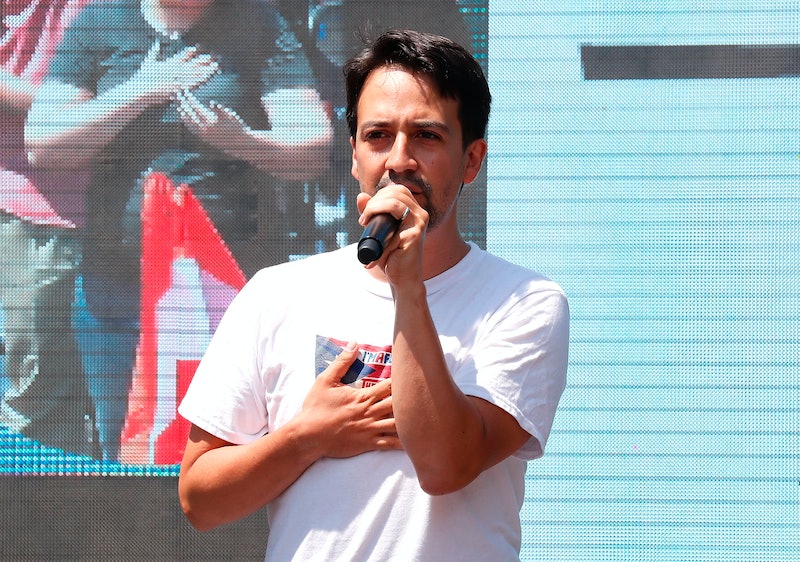 Lin-Manuel Miranda will bring Hamilton to Puerto Rico in January 2019, but it's not the only way he's planning to support the arts on the island. On Sunday, Lin-Manuel Miranda announced an arts fund for Puerto Rico, which will help restore the U.S. territory's arts institutions after the damage of Hurricane Maria, according to Entertainment Weekly.

Puerto Rico was already wrestling with an 11-year economic recession when the devastating storm hit. Cultural institutions and arts organizations were hit hard by both. Miranda revealed his plans for the multi-million Flamboyan Arts Fund on Twitter, and later revealed in a public appearance on the island who the first five recipients of the grants would be. He also noted that all proceeds from Hamilton's run in Puerto Rico would go toward the effort, with the hopes of sustaining artists and cultural programs for a long time.

Puerto Rico still has a long road toward recovery after the hurricane, and the fund is meant to aid relief efforts. On Twitter, Miranda noted the territory's resilience and how funding the arts will play a role in the rebuilding process. "Many artists and arts organizations are under resourced, others are barely making it, but they do what they can to survive, despite the economic situation in Puerto Rico before and after Hurricane Maria," Miranda wrote. "Of course, we continue our efforts on behalf of the long term recovery of Puerto Rico."

According to CBS News, the first recipients of the fund will include a dance company and a local theater company, Y No Había Luz. The seven-member company reportedly struggled to find funding and canceled all performances after Hurricane Maria. "This will allow us to start dreaming again, to come up with new ideas, to visit more cities," Julio Morales, artistic co-director of the company, told the news source. "This will allow us to breathe."

Miranda was planning to bring Hamilton to Puerto Rico before the hurricane, but sped up the production timeline and pledged the show's proceeds after the storm, according to Playbill. The performances will take place at the University of Puerto Rico's Teatro UPR stage. The theatre, which was damaged in the storm, will be repaired before the show's run. Jeffrey Seller, Hamilton producer, said in a statement to Playbill that the performance was meant to lift up the community.

"In the aftermath of Hurricane Maria, we hope Hamilton can play a positive role in bringing the artistic pulse of the community back to life," Seller said. "Arts and culture are pillars for economic development, cultural tourism, community empowerment and growth."

Hurricane Maria hit Puerto Rico in September 2017, and was the strongest storm to hit the island in 85 years, according to CNN. The storm destroyed much of the island's infrastructure and left thousands dead, and according to the New York Times, the federal government's slow response was criticized by the United Nations. Six weeks after the hurricane passed, many residents were still without clean drinking water and power, according to TIME. Miranda, whose family is Puerto-Rican, has been raising awareness on social media about the U.S. territory's dire situation since the storm hit.

The Hamilton writer and star is visiting Puerto Rico this week, and tweeted the announcement of the arts fund while on a plane to the island. He hopes to raise $15 million dollars for the Flamboyan Fund over the next few years, according to The Hollywood Reporter. In his Twitter statement, Miranda explained why the arts shouldn't be forgotten in the rebuilding and recovery. "Artists entertain, inspire, heal, give voice to the voiceless, call out injustice and keep us in touch with our humanity," he wrote. "So we're gonna have their backs."