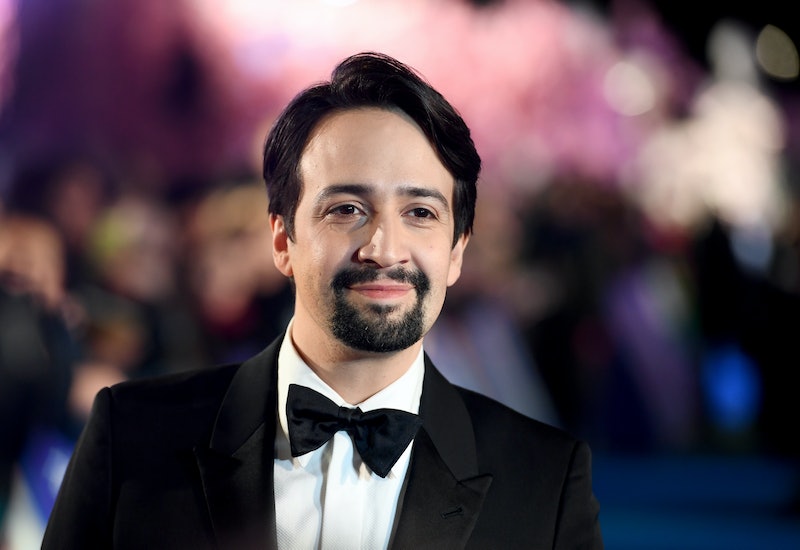 The star of Hamilton just can't stop surprising his fans in the best ways. On Friday, Lin-Manuel Miranda surprised a high school drama club by showing up to their performance of In the Heights at New York's George Washington High School, per Entertainment Weekly. Miranda, who wrote and directed the original Broadway production of the show, showed his support for the local performance by coming on stage during a curtain call for the show. Alongside director Jon M. Chu, who will helm the film adaptation of the musical, and Quiara A. Hudes, who wrote the book version of In the Heights, the writer and performer posted on social media about how meaningful it was to see the show performed by young people.

A movie version of In the Heights is slated to begin filming in Washington Heights this summer, and according to Chu, the surprise was a way to get inspired after the final rehearsal. The director shared a video of the curtain call on Twitter, writing:

"We start shooting #InTheHeightsMovie on Monday. So after our final rehearsal we took a trip 2 GeorgeWashington highschool in the Heights 2 see them perform In The Heights! Could not b more Inspired by these students. Guess who else showed up #HeightsInMyHeart @Lin_Manuel"

Miranda can be seen in the video bowing to the student actors and congratulating them on the performance.

The Hamilton creator and star retweeted the video on his own Twitter page, and added a few thoughts about what it meant to see the show performed by students from the neighborhood that serves as the setting for the play. He wrote: "We saw In The Heights in the Heights for the first time, with kids from all over the neighborhood. It's cool I only cried 10 times. These kids were so good. Our future is so bright."

Miranda also shared a selfie with Hudes on Twitter, writing, "Me & @quiarahudes see Heights at George Washington High School" with three heart emojis. Hudes retweeted the cute picture, including a message about how powerful the performance was. She wrote: "These students were pure life and energy, and the local audience laughed at different lines than the Broadway audience. #InTheHeights was alive as it’s ever been last night at George Washington HS and gratitude is the name of my day."

George Washington High School's performance of the show was not the only way the star included the Washington Heights neighborhood in the creation of the movie. On Saturday, Miranda posted a video from the In the Heights neighborhood casting call on Twitter, wishing all the hopeful actors good luck. On Saturday, the production put out a casting call for kids and older Washington Heights residents to audition for extras in the movie.

In the Heights debuted on Broadway in 2005, and won a Best Musical Tony Award in 2008. Miranda announced the main cast for the movie on April 12, according to NBC News. Anthony Ramos, who also appeared in Hamilton and A Star Is Born, will play Usnavi, the story's protagonist. Melissa Barrera, Leslie Grace, and Corey Hawkins were also cast in the film.

It's clear that Miranda wants the film adaptation to remain true to the Washington Heights neighborhood in New York City, which is where the musical takes place. The surprise visit to George Washington High School shows how much Miranda loves the community, and nobody will be more excited to see the movie adaptation of the show than the young actors the star surprised on Friday.