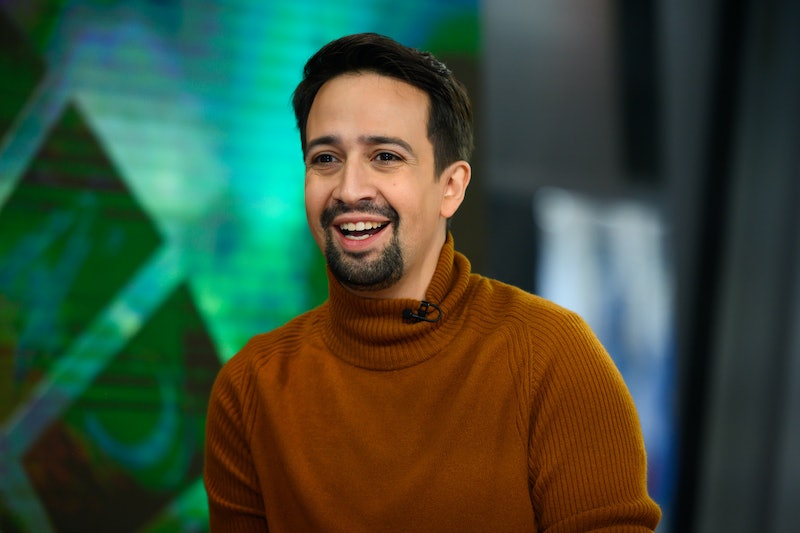 There are some well-known, or not-so-well-known, collaborations in music that are frankly bizarre on paper, but go on to create true bops. For example: Tony Bennett and Lady Gaga's Cheek to Cheek, Beyoncé and Shakira's "Beautiful Liar," and Lin-Manuel Miranda and Taylor Swift's VMAs promo. Yes, you read that correctly. Lin-Manuel Miranda collaborated with Taylor Swift, it was just way back in 2009, before Swift took over the world and Miranda's Hamilton premiered. The two worked together for the 2009 MTV Video Music Awards, as revealed by the actor-writer-musician via Twitter on Wednesday, Dec. 4. And there's only one question that matters: how did nobody know about this?

According to Miranda, he wrote the lyrics that Swift sang during an extravagant West Side Story-themed promo spot for the 2009 VMAs. In the commercial, the singer rode in a cab (donned with an actual Moonman) around Times Square, belting a unique rendition on the musical's iconic showstopper "Tonight," which was re-written to hype up the upcoming show. Swifties may remember this unique moment in time, but even the biggest fans likely didn't know that Miranda was at the helm of it.

Miranda reminded everyone of this momentous occasion in pop culture history after he initially included a Swift reference in a tweet comparing Rami Malek's masked James Bond villain to the Phantom of the Opera. When fan @LINcorrect responded to him, ecstatically celebrating that Miranda tweeted about Swift, he retweeted them and made the little-known fact of their collaboration go viral. "Hey... You know I wrote these lyrics for T Swift back in 2009, right?," he said. And just like that, the entire world was shook.

Graciously, he also included a YouTube link of Swift's take on "Tonight," which is just as wide-eyed and fantastical as you'd imagine from the then-budding country superstar. "Tonight, tonight, I'll sing my song tonight," she sang, referring her upcoming performance at the show. She even made a nod to one of her iconic past hits. "There'll be no teardrops on my guitar," she sang. The whole commercial is basically Swift starring in her own West Side Story, but without a distracting love interest.

As music fans from the late '00s may remember, Swift wasn't alone in these promos. To create "VMA Side Story," MTV worked with an assortment of artists, including Katy Perry, Ne-Yo, Cobra Starship (remember them?), Leighton Meester (remember when she made music?), and that year's host, Russell Brand. Each performer had their own decadent New York setting and a unique, VMA-themed take on "Tonight," truly embracing the message of the famed '50s musical.

Perhaps they could all reunite to star in West Side Story Live should a network bring it to life? We would love to see it.

More like this
Taylor Lautner Thought Taylor Swift's 2009 VMAs Interruption Was A "Skit"
By Alyssa Lapid
The Ticketmaster Senate Hearing & Taylor Swift Tickets Debacle, Explained
By Jake Viswanath
Tour Rehearsals Didn’t Stop Taylor Swift From Attending The 2023 Grammys
By Jake Viswanath
The History Of Taylor Swift's "All Too Well" & What The Lyrics Actually Mean
By Jake Viswanath
Get Even More From Bustle — Sign Up For The Newsletter
From hair trends to relationship advice, our daily newsletter has everything you need to sound like a person who’s on TikTok, even if you aren’t.