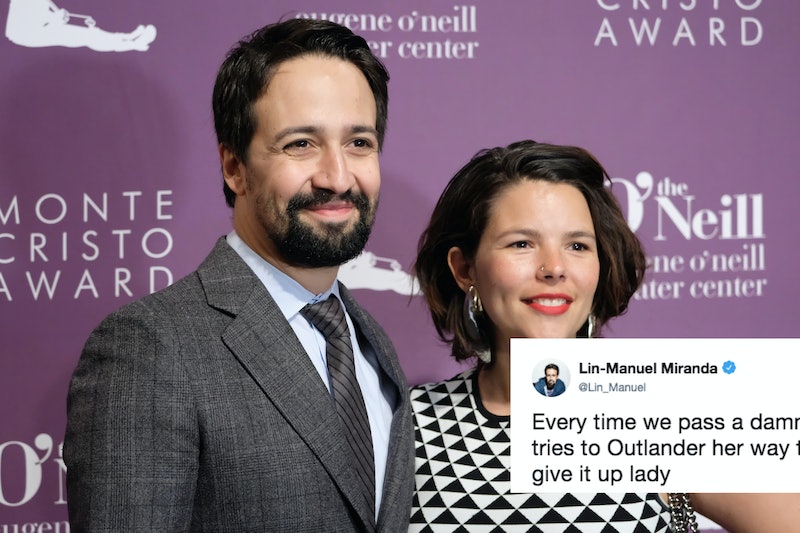 If there was a competition to find out who's the biggest Outlander fan, Lin-Manuel Miranda's wife, Vanessa Nadal, would probably take home that title, if her husband's recent tweet is any indication. To make his funny post even more amazing, the Outlander cast responded to Miranda's tweet, as JustJared reported. And their responses are sure to bring a smile to anyone who's a fan of the series.

On August 8, Miranda tweeted a photo of his wife tapping on a henge (a stone from Craigh na Dun perhaps?) and trying to perform a little magic. In case you were wondering, yes, there's a good (and fun) reason why she's doing that. As many probably already know, the plot of the Starz show kicks off with a 20th century woman named Claire (Caitriona Balfe) traveling through the stones of Craigh na Dun in Scotland to the 18th century, where she falls in love with the dashing Jamie (Sam Heughan). So Nadal is just trying to get her Claire on. Who can blame her?

Miranda jokingly captioned the snap from their British vacay with, "Every time we pass by a damn henge my wife tries to Outlander her way to Jamie-land, give it up lady." It's so cute to see that the couple can joke around about her serious Outlander stan status.

It had to have been fun to recreate an iconic scene from the series. What made the situation even more fun was the cast's hilarious responses. Jamie himself (Heughan) retweeted the pic and wrote, "Lady has remarkable taste." Can't exactly argue with that. Well, actually... Miranda can.

The Broadway star joked that he was going to seek out his Hamilton pistol in order to duel the Spy Who Dumped Me actor. He also included a GIF from the show, in which Claire can be seen saying, "How dare you," to really get his point across. Obviously, their entire exchange was just in good fun, though.

Balfe followed in her costar's footsteps, as she also reacted to Miranda's photo. She also managed to throw in a quip about Hamilton in the process. In short, she'd totally trade in her TV husband in order to get some tickets to the Broadway show. The actor hashtagged the post with, "#everyonehasaprice" and "#justfeedandwaterhimdaily." As Miranda later deemed it, fans may have a "time travel Wife Swap" on their hands here.

In case you weren't convinced yet that Nadal is one of the biggest Outlander fans out there, this isn't the first time that she's tried to pull a Claire. In March 2017, she once again posed with a henge and wrote, "Jamie, I'm on my way!" And, once again, Miranda had the best response to her Outlander love. "V I'm standing RIGHT HERE," he tweeted.

Considering the fact that Nadal is a big fan of the time-traveling series, as evidenced by her multiple henge travel "attempts," it's safe to say there are few who could rival her love of the show. And since she is such a fan, it was that much more exciting to see the stars of the show themselves get in on the fun.