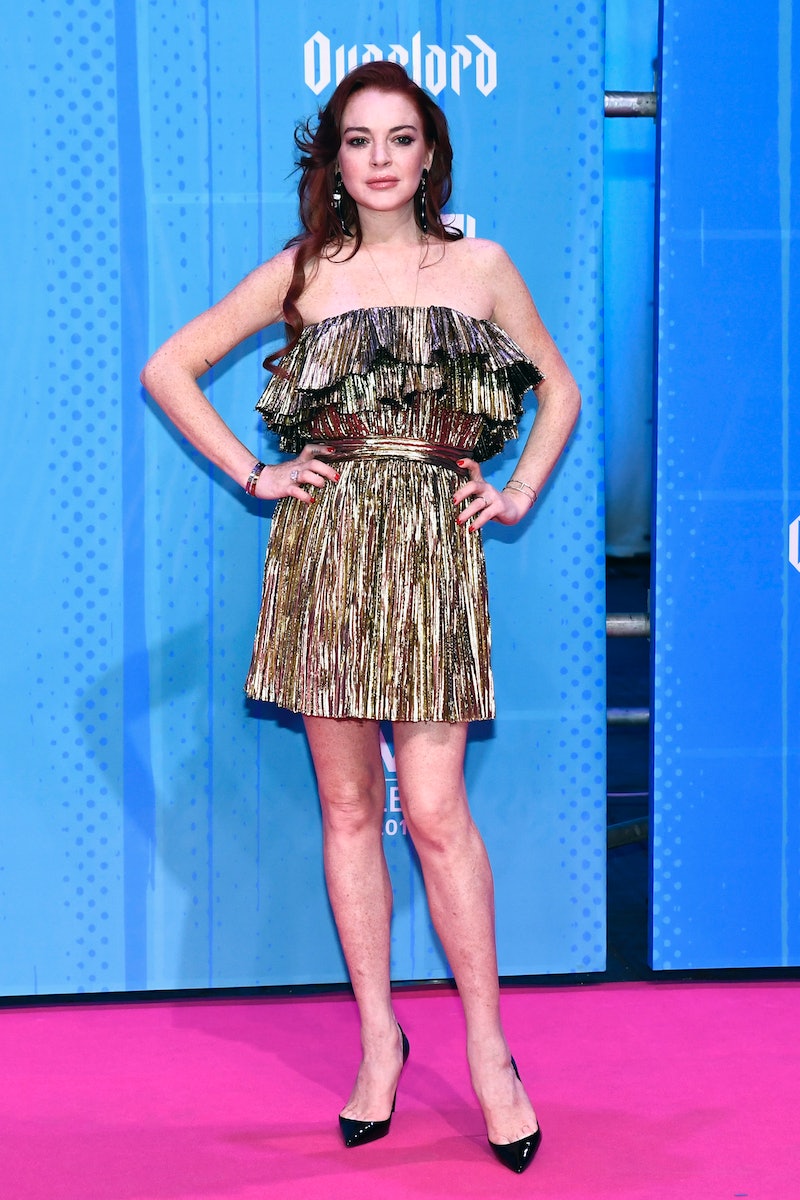 Rejoice: Lindsay Lohan is returning to television! Sadly, it's not at the Lohan Beach Club in Mykonos, but her new job might be even more exciting than her former MTV show. Lindsay Lohan is joining The Masked Singer, but for those who are obsessed with the U.S. edition of the popular South Korean format, there's a catch. Lohan won't be singing underneath an elaborate costume disguise, and she won't be sitting alongside Ken Jeong or Jenny McCarthy guessing contestants. Instead, she will be a judge on the Australian version of The Masked Singer, making its debut Down Under later this year.

On Sunday, July 14, Australia's Masked Singer announced its judges, or as they call it, the "guessing panel," on social media, revealing that Lohan is joining the panel alongside radio host Jackie O, comedian Dave Hughes, and Australian music icon Dannii Minogue. It will follow the same format as the U.S. edition of the show, with the unusual quartet being tasked with guessing the identities of the famous celebrities singing behind their extravagant costumes.

Minogue posted about the news on her Instagram, sharing a preview of the new show and stating how elated she was to be joining Lohan and the others as a judge. "Big reveal 🎉🎉🎉🎉 I’m so excited to be joining @lindsaylohan @jackieo_official and @dhughesy on the @themaskedsingerau panel," she wrote. "I ❤️ the US version of this show. Get your guessing shoes on Australia - you’re going to be OBSESSED!!!" Lohan responded to her new co-worker's post with two comments full of heart emojis, which just about says it all really.

Lohan herself acknowledged the news by simply posting the same preview video on her Instagram and tagging The Masked Singer Australia's account. This will be Lohan's first foray into being a judge on a reality competition, but luckily, she'll have support from veteran judge Minogue if she needs it. The singer has been a judge on both the British and Australian editions of The X Factor, so Lohan will be in great hands.

If you want more Lohan (who doesn't?) now that the future of Lindsay Lohan's Beach Club is unclear, The Masked Singer isn't the only thing that's in the cards for her. Lohan will be singing once again in the near future. In June, Lohan teased that she was in the studio working on new music with a post on Instagram. She confirmed the news on June 2, replying to a news story by The Blast on Twitter and saying that she was "Hard At Work" on new music.

It's been much too long since we've heard new music from Lohan. Her last album, A Little More Personal (Raw), was released in 2005, and her teen-pop single, "Rumors," remains one of the most iconic of the genre. Could we expect a live performance of her new single or a throwback hit on The Masked Singer Australia? A fan can dream.

While it would be a treat to have Lohan back home on the U.S. version of The Masked Singer, she's sure to be just as hilarious and adorable Down Under. We look forward to the inevitable memes.

More like this
Where Is Armie Hammer’s Ex-Wife Elizabeth Chambers Now After 'House Of Hammer'?
By Grace Wehniainen and Radhika Menon
Kanye West Apologizes To Kim K "For Any Stress I Have Caused" In Rare Interview
By Jake Viswanath
Confusion Reigns After Kanye Changes His Instagram Profile Pic To Kris Jenner
By Jake Viswanath
Kylie Jenner Goes Into Labor & Welcomes Her Baby On 'The Kardashians'
By Jake Viswanath
Get Even More From Bustle — Sign Up For The Newsletter