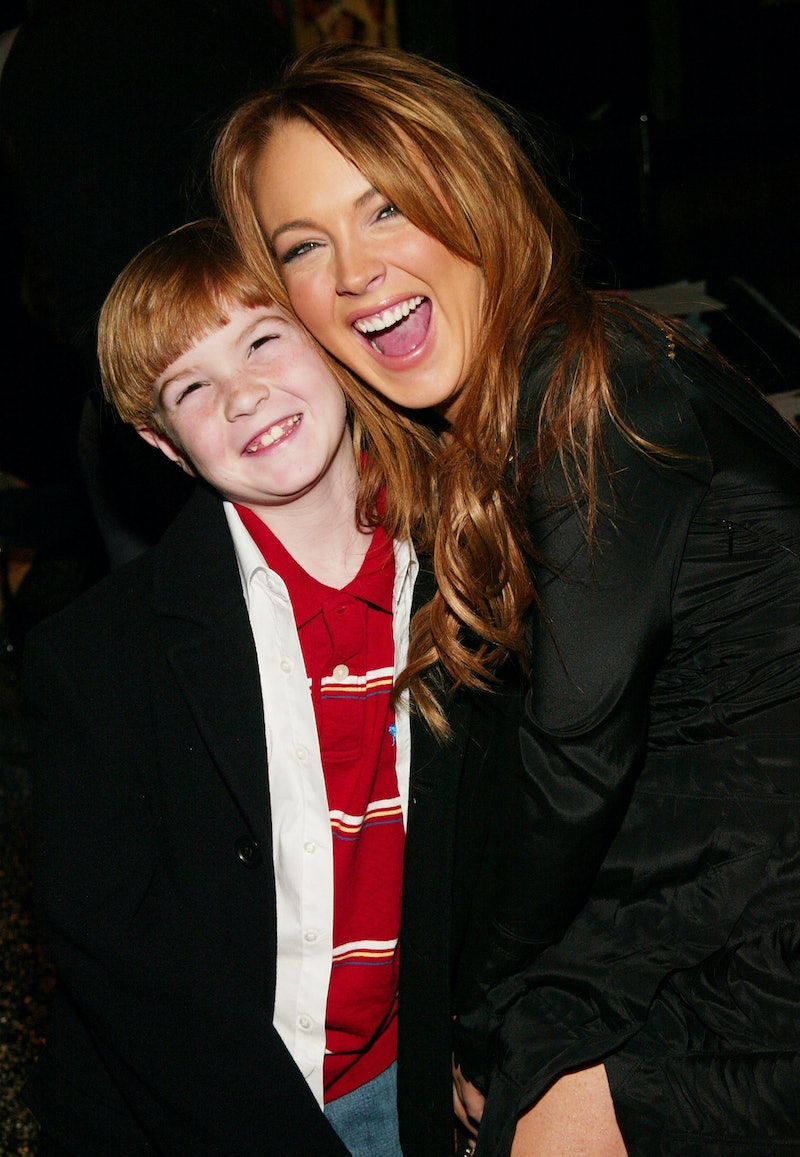 Step aside, Lindsay. There's a new Lohan heading into the spotlight. Dakota — aka Cody — Lohan is just 22 years old. Lindsay's little bro is trying his luck at a modeling career of his own, and with his auburn locks, steely blue eyes, and memorable last name, it seems like he's off to a good start. Dakota Lohan's Instagram features tons of throwback pics of him and his siblings, mom, and grandmother, giving fans a tiny peek into what life must have been like growing up in one of Hollywood's most famous families, and how that's helping him kick off a career of his own.

According to ET Online, the youngest Lohan signed with IMG modeling agency in March 2016. In an interview with W magazine from that year, he explained why modeling piqued his interest. "It's a great way to connect with tens, thousands, millions of people," Dakota said. "Models have a greater reach now than ever before and there's an entire generation of younger kids that look up to models. The platforms to reach people is surreal. It's aspirational."

ET reports that Dakota started modeling when he was nine years old, walking in the Child Magazine Fall 2006 Fashion Show as part of New York Fashion Week. He took an extended break after that (because he was probably, you know, being a child), but since signing with IMG, has been featured in Vogue Japan and Vogue China and once again walked in New York Fashion Week — this time at the Art X Show, reported W. He also nabbed his first cover at Odd A Magazine, per his own Instagram post. And he's not slowing down any time soon.

Lindsay Is Showing Him The Ropes

This September, Lindsay and Dakota appeared together at Paris Fashion Week. According to Vanity Fair, the sibs sat front row at Yves Saint Laurent, where they were guests of Anthony Vaccarello, the creative director of the fashion house.

Dakota is the proud owner of a four-year-old golden retriever named Koa, who has his own Instagram page.

In his profile with W magazine, Dakota explained that in addition to modeling, he's also an avid surfer, as well as a student.

Dakota's Instagram is filled with skating pics as far back as 2013.

He's Close With His Mom

TMZ reports that Dina Lohan is serving as her son's manager, just as she did for Lindsay, and Dakota's Instagram shows multiple pictures of his mother with sweet captions, conveying that he has nothing but love and respect for her.

He Has A Tattoo For His Grandmother

He got a tattoo to honor his maternal grandmother, Ann Sullivan.

He Loves His Siblings

Throughout Dakota's Instagram, there is one, clear, recurring theme: the four Lohan siblings together looking tighter than ever. Whether they're throwback shots of a Parent Trap-era Lindsay with her arms around her kid sibs, or more recent ones of the four adults together, Dakota's Instagram is like an online photo album chronicling the undeniable sibling love these four still share.