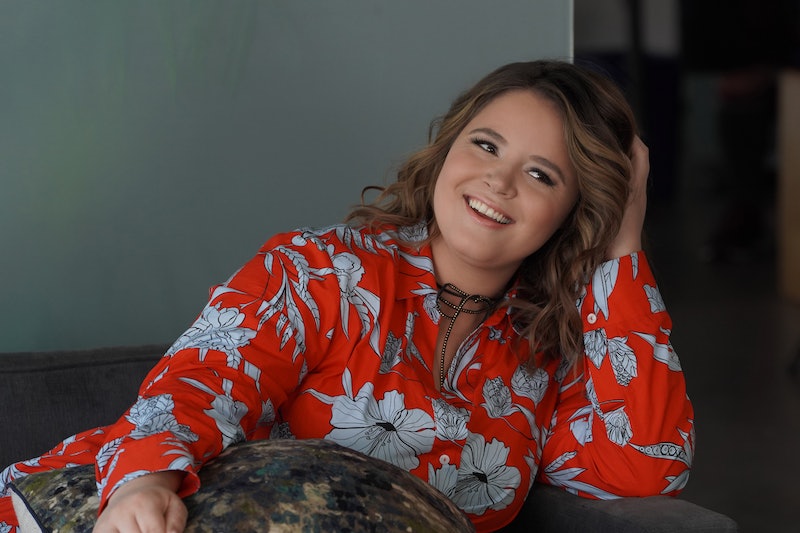 Spoilers ahead for You're the Worst Season 5, Episode 10. In the past five seasons, Lindsay (Kether Donohue) has been through the relationship wringer: First, she separated from her husband, Paul (Allan McLeod), impregnated herself with his sperm, got back together with him, had an abortion, experimented with cuckolding, got divorced, and then began having sex with Edgar (Desmin Borges). But on the March 13 episode of You're the Worst, Lindsay has an eye-opening sexual encounter with a woman, which may change everything for her relationship trajectory.

At the beginning of the episode, we see Lindsay dressed like a flight attendant in a gray business suit, glasses, and neck scarf, which frankly looks nothing like the fun-loving Lindsay we know and love. When Gretchen (Aya Cash) asks about her uncharacteristic outfit, Lindsay explains that her date tonight likes books. Hence, her "smart girl clothes." "Lindsay, you're not doing that thing where you try on a new identity for a man again, are you?" Gretchen asks, pointing out that she was at Burning Man all of last week with a guy.

Enter Gretchen's boss Yvette (JoNell Kennedy), whom Lindsay hitches a ride with back to the PR office. And although Lindsay also works for the firm, she has no idea who Yvette is, and soon begins unloading her relationship woes on her. She admits to hating Burning Man (no surprise there), but says that she could learn to love it if she tried hard enough. "You can't force love," Yvette points out. "But I want it now!" Lindsay responds. "I want someone to love me. I'm ready! I'll do whatever it takes! Even if I have to change my name, my hair, the date on my birth certificate. I'll leave out all the bad details of me."

It's such a heartbreaking thing to hear from Lindsay, who has always been such a confident, shameless person. And it's true — she has calibrated her personality to whoever she's been with. When she was married to Paul, she dressed like a rich housewife, attended his work events, and molded her life around his personality. (Granted, she never really tried getting into his hobbies, but knowing what those are, it's understandable). Only with Edgar was she fully herself, but as they came to realize earlier this season, they're better off as friends.

"Stop looking for who to be," Yvette advises her, taking off Lindsay's silly glasses. "Because guess what? You already are her." After they kiss, Lindsay's eyes become wide with realization: She is into this! And when they start getting frisky, Yvette asks if it's OK (because consent is sexy!). Lindsay responds with an emphatic, "Hell yeah!"

While the women had a great time together and plan to meet up again, it's too soon to tell what this will mean for Lindsay's arc this season. Will she and Yvette start dating? Will Lindsay decide she's interested in dating other women? Or does this tryst simply serve as a reminder that people will love her for the lovable, all over the place weirdo that she is? At the end of the day, she doesn't have to like Burning Man, bird-watching, or books in order to be loved. After all, tailoring your personality to someone else tends to reap unseemly results.

Whatever the case, it's exciting new territory for the woman who once proclaimed, "Men are mean, and they hurt my brain."