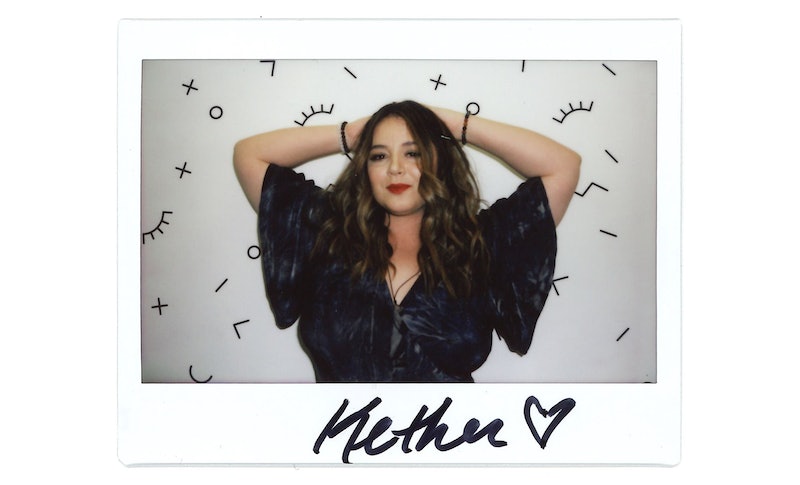 When celebrities hang out with Bustle writers, we want to give them the chance to leave their mark. Literally. So we hand them a pen, a piece of paper, a few questions, and ask them to get creative. The rest is up to them. This time, You're the Worst star Kether Donohue is leaving her mark in the Bustle Booth.

Kether Donohue's character Lindsay on You're the Worst has made a name for herself as the fun, shameless friend of Gretchen's (Aya Cash) who draws from an endless pool of self-confidence. Over the past five seasons, she's grown and evolved from a disgruntled housewife to a divorced, self-sufficient publicist — and through it all, she's maintained that unflappable confidence. It's an evolution that's helped Donohue, who says she's nothing like her character, learn how to channel her own.

"Contrary to what people might think, because I know I come off very outgoing and extroverted — I get very, very insecure and very shy, and I get social anxiety disorder," Donohue tells Bustle. "So I definitely have to incorporate that no-shame, Lindsay quality into life situations." It's clear that, even though Lindsay has done things as unhinged as artificially inseminate herself with piping hot semen from a turkey baster, the actor has nothing but affection for her You're the Worst character. "She’s a blassstt!" she chirps. "I'd love to go out with Lindsay!" In fact, Lindsay has an attribute that Donohue fondly refers to as the "no-shame muscle," which the actor soon learned how to flex herself.

What would Lindsay do, for example, in an audition? "In my head I’ll be like, 'Wait! Just tap into whatever you use when you're playing Lindsay, where you're able to do ridiculous things,'" Donohue says. "I have to remind myself I have that in me to do that.... I'm like, 'Well, no, you did that scene where you stabbed your husband, so you could go into an audition room with a bunch of producers.'"

Channeling Lindsay for five years has also helped Donohue stop catastrophizing. Donohue recalls that back in Season 1, she often cried after filming scenes — she was convinced that she was doing an awful job. "Not everything has to be so extreme and the end of the world," she explains, adding that she's since realized that every take doesn't have to be her absolute best. She's also been learning how to let go of caring about other people's opinions of her — an unfortunately essential skill for any woman starring on a television show.

"Over the course of five years, more people watch, more people know about the show, but that also equals more people [who] can criticize your appearance," Donohue says. "Chin fat started developing in Season 3, and watching that, I was like, 'Oh sh*t, I just have to not take it seriously.' I've named my chin fat Debbie. I'm like, 'Debbie loves to hang out!'"

Donohue's outlook is a healthy, gracious way of viewing herself, and it's allowing her to move forward instead of dwelling on the little things. "Not everything's going to go your way, and you wake up tomorrow, and life goes on," she says. "It's as simple as that." Or, to quote Lindsay, "Whatever, history — you happened already. Let it go."

Check out Kether's answers to our Bustle Booth questionnaire below.