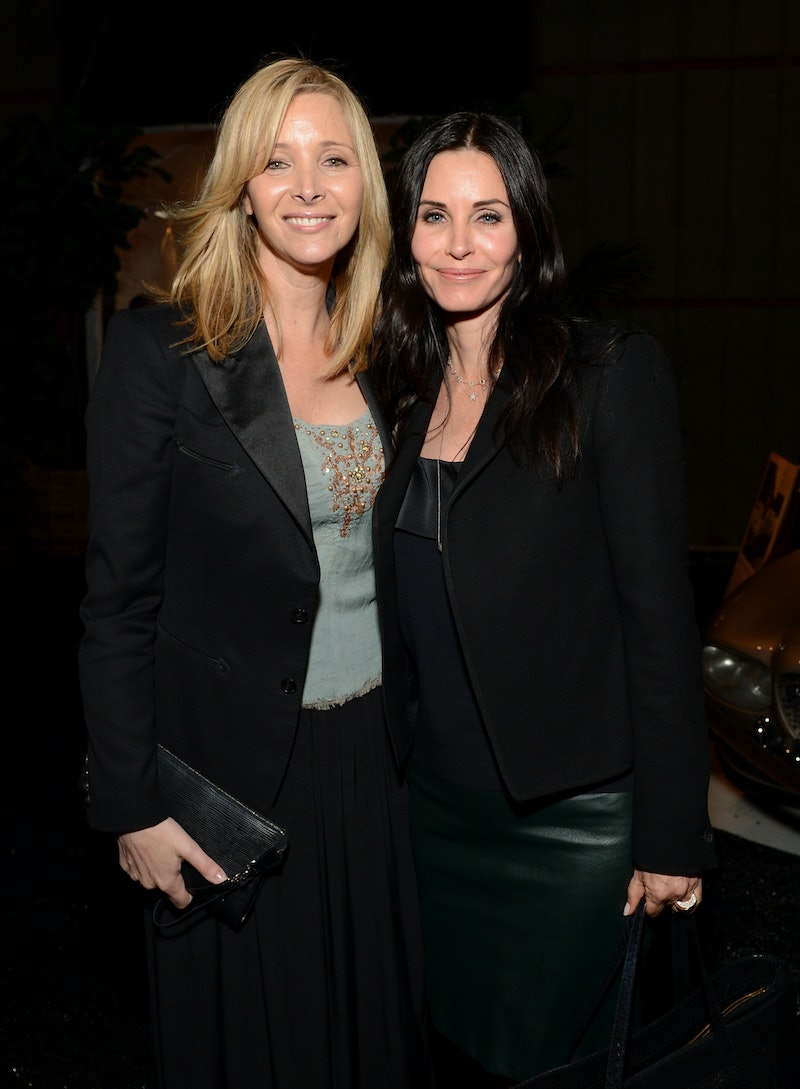 It's 2019, and despite the fact that a lot of people are still marathoning Friends on Netflix, there's been no real sign of a reboot in the works. But as it turns out, the cast doesn't need a revival to hang out together. On Sunday, Lisa Kudrow, Jennifer Aniston and Courteney Cox had a girls' night and shared photos of all three of them together on Instagram, and it's basically a Friends' fan's dream come true.

In a photo that Cox posted on Instagram, she, Aniston, and Kudrow are all standing close together for a selfie. She didn't fill her followers in on what they were doing that night, but the photo is epic enough all on its own. "Trying to figure out what to say on Instagram," Cox wrote, adding the hashtags, "#gotnothing #friends #girlsnight."

It's awesome anytime actors who play friends on TV are friends in real life, and somehow, with these women, it seems even better. Even if fans never get to see the female Friends back together and in character on screen, these three do look happy to be spending time together, and that's what counts. Monica, Rachel, and Phoebe's relationship would definitely stand the test of time, so it's good to see that Cox, Aniston, and Kudrow's has, too.

Kudrow also shared a photo from their time together, and it looked like they were out somewhere having fun. They're all smiles in the picture. Seems like a pretty solid girls' night.

As far as Instagram has shown, it seems like these ladies have been spending a lot of time together recently. Last weekend, they got together for Cox's birthday, when she took the opportunity to share yet another sweet photo of all three of them during the festivities — this time, in the daylight.

"How lucky am I to celebrate my birthday with these two??? I love you girls. So much," she wrote.

Since Cox joined Instagram back in January, she's been sharing her adventures with fans, and there have been plenty that include her former Friends costars by her side. Could this mean they're filming something together? When she sat down with Ellen DeGeneres earlier this month, Aniston did admit that she'd be down for a reunion — and that she believes the rest of the cast would be into the idea, too. It's not quite as far fetched to think that it could happen as it once was, so who knows what the future might hold?

In any event, maybe all of this will finally convince Aniston that it's time for her to hop on the social media bandwagon, too. Fans can dream.

Let's just keep our fingers crossed that Aniston, Kudrow, and Cox spending so much time together recently means that they could be working on the Friends reboot that we've all been waiting for... or that their 25 year friendship is thriving and as strong as ever. Either way, it's a pretty cool outcome for three stars from one of the most beloved sitcoms ever.